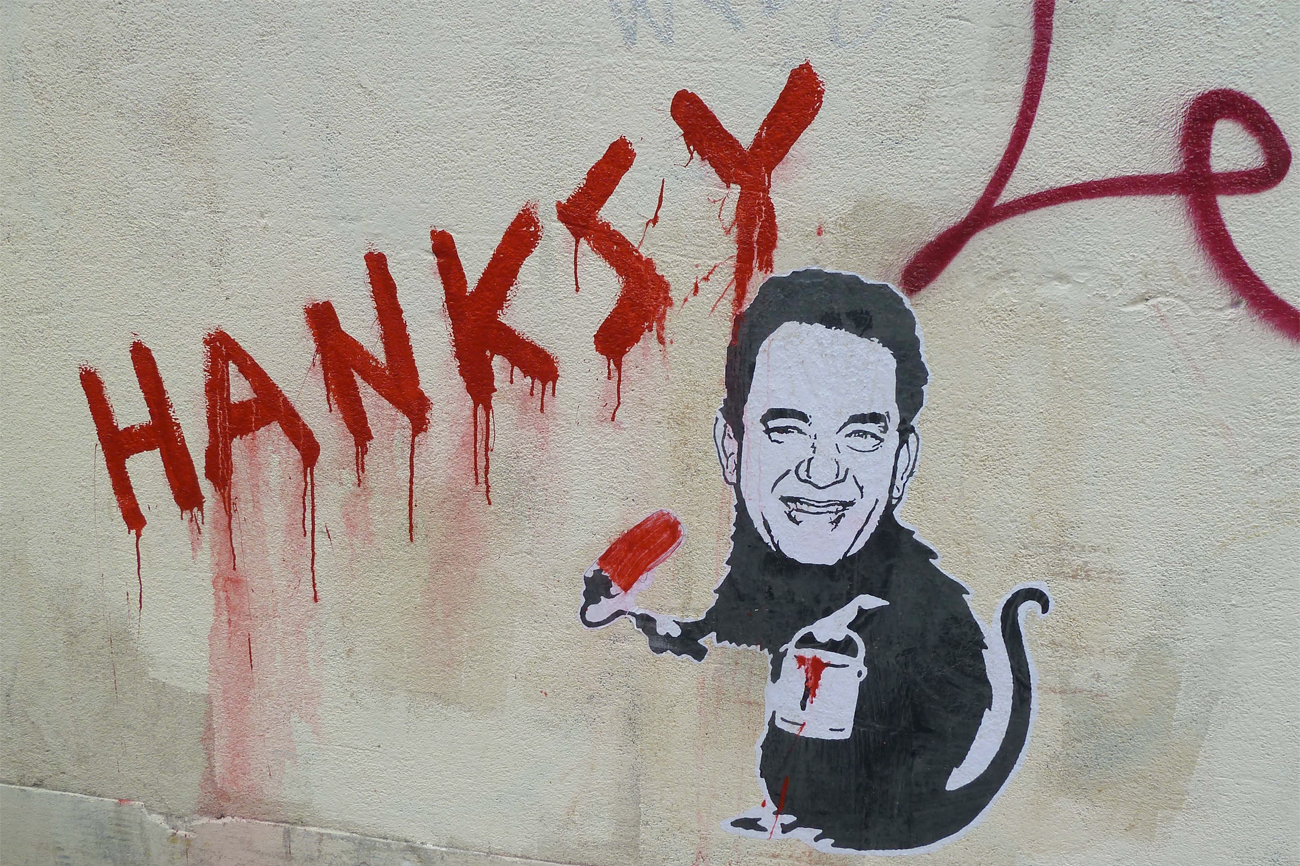 The world has long speculated on the identity of British graffiti artist Banksy. Now with Banksy-inspired graffiti, tagged “Hanksy” popping up in New York's public spaces, there's a sub-identity to guess. Whoever's behind it – Tom Hanks, Banksy himself or iPhone app Instagram, it hasn't exactly created a sensation on the Interwebs. It's still fun to speculate though. By THERESA MALLINSON.

In April Banksy-derivative graffiti, tagged “Hanksy”, and featuring actor Tom Hanks’ head, started popping up around Soho in New York. The first of two stencils sported Hanks’ head on a Banksy-style rat, wielding a paint-roller and a can of red paint. The other is based on Banksy’s “Little girl with a red balloon” image, with Hanks’ head appearing on the balloon, and the phrase: “Catch me if you can”.

No one’s caught Hanksy yet or, to be fair, showed much inclination to do so. Over at Fast Company, they have a few ideas as to the artist’s identity. The chief suspects: Tom Hanks, employing a guerrilla marketing tactic for his latest movie, Banksy in a typically obtuse publicity stunt and Instagram in an attempt to attract attention to its #streetart hashtag. Or, perhaps, it’s just a whimsical fine arts student making a profound statement that’s lost on the rest of us.

The Tom Hanks theory fits in neatly with the actor’s other offbeat attempts to drum up publicity for his latest movie “Larry Crowne”, which he both stars in and directs. As Fast Company notes, Hanks has been: “… opting out of the typical Hollywood press machine and choosing instead to dance on Spanish television, make a Pulitzer-plea for the Onion, and ‘leak’ production details via Twitpic.” However, a studio representative told Fast Company that Hanks had nothing to do with Hanksy’s artwork. Of course, if it is a covert publicity stunt, the studio might very well not be telling the truth, but the link between Hanksy and “Larry Crowne” seems nonexistent (although Hanks’ video mooting a Pulitzer for the Onion doesn’t exactly provide an obvious tie-in either).

To quote the movie’s official website: “Academy-award winners Tom Hanks and Julia Roberts come together for a romantic and optimistic comedy about how the hard knocks from today’s recession inspire one everyday guy to undergo a personal reinvention and find an unexpected second act in his life: Larry Crowne.” The movie hasn’t opened in South Africa yet, but judging from online reviews, it seems Larry Crowne’s “unexpected second act” involves going back to college after losing his job, and enrolling in economics and public-speaking classes. A gratuitous sub-plot features Crowne spray-painting the wall of the store where he used to work with anti-capitalist slogans. He only escapes arrest when the Julia Roberts character earnestly explains to his ex-boss that this is part of Crowne’s practical course work. Actually, no, I made the sub-plot stuff up. If Hanksy is a publicity stunt dreamt up by the Larry Crowne team, it’s way off target.

On to suspect number two: Banksy. Although it’s tempting to attribute Hanksy to Banksy himself, this seems equally unlikely. The incognito street artist may be all for indulging in publicity-hungry pranks, but associating himself with an actor such as Hanks just doesn’t strike us as Banksy. The word and visual play is cute – perhaps too cute – but ultimately devoid of any meaning. Banksy more often has a broader artistic or social message to impart. For example, his opening credits for “The Simpsons” last year formed a stinging critique of Asian sweatshops.

The third theory is that the clever people at Instagram are behind Hanksy, as a way of promoting their app’s #streetart hashtag. (In case you’ve been offline for the last year or so, Instagram’s that iPhone app that makes all photos look exactly the same, in 11 different ways.) But while there have been more than 40,000 Instagram uploads with the #streetart tag since the beginning of the year, only 11 of them reference #hanksy specifically. Some campaign, that.

So then, what really, is the point of Hanksy? If there’s a commercial entity behind the tag – and make no mistake, these days Banksy is just as much a commercial entity as Tom Hanks or Instagram – they haven’t yet made much of a point. Unless it’s a comment on the ephemeral nature of street art, despite the 21st  century obsession with documenting and capturing every corner of our world (some of the Hanksy graffiti has already been painted over); a comment on the impossibility of predicting the ingredients it takes to manufacture a news story that’ll be covered around the globe (this one never really took off). Which makes Banksy the most likely candidate after all. Him or that hypothetical fine arts student. DM