All hail King Novak, ruler of Wimbledon and all Serbs

All hail King Novak, ruler of Wimbledon and all Serbs 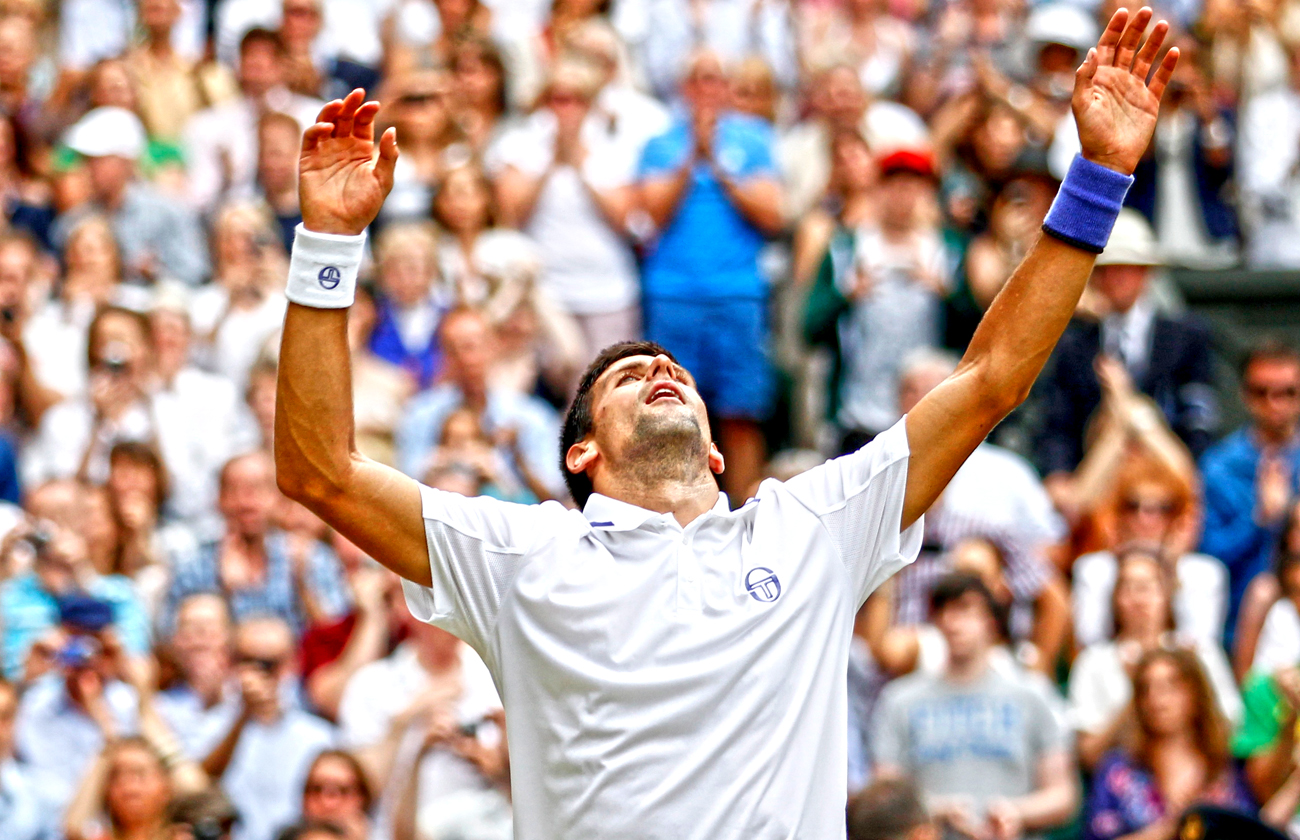 Despite Marco Polo’s adventures, the Slavic nations have always been a tad mysterious and wild to the western European mind – especially to the jolly-hockey-sticks British folk. That changed when stiff-upperlipped Wimbledon commentators had to wrap their recalcitrant tongues around names like Ivanisevic. Now they have a new one – Novak Djokovic – and following his wholehearted conquest of Rafael Nadal on Sunday, they’d better get used to that name slipping like cream off their tongues. By MICHAEL McCLELLAND.

To put it in movie terms, over the course of the last four seasons men’s tennis has basically revolved around two leading actors and two supporting actors, with the occasional scene-stealing cameo popping up every once in a while. The lead actors would be Roger Federer and Rafael Nadal, who have won 26 of the last 32 grand slam titles between them. In the supporting categories we have Novak Djokovic, who has won two Australian Open titles, and Andy Murray, who has reached three major finals in the last four years.

This season has provided even more evidence that men’s tennis is currently a four-way race. At least three of those four men have reached the semi-finals of each of the grand slam tournaments played in 2011.

To lump this season in with the last few, however, would be to ignore a new dominant figure in the men’s game. Though he won the 2008 Australian Open, Novak Djokovic had been a distant third in the Federer-Nadal era. Then, with an increased focus on fitness and a newly acquired balance of fire and calm, Djokovic began the 2011 season with a 41-match winning streak, the second best start to a year in the history of men’s tennis.

Though the streak ended with a loss to Federer in the semi-finals of the French Open, Djokovic began this year’s Wimbledon with more confidence than any other player on the tour. With Federer combating questions about his age and motivation, Nadal looking fatigued and defensive and Murray facing the firing squad that is the British press, Djokovic looked in the best position to walk away with a Wimbledon title. Photo: Rafael Nadal of Spain hits a return to Novak Djokovic of Serbia during their men’s singles final match at the Wimbledon tennis championships in London July 3, 2011. REUTERS/Eddie Keogh.

Momentum, however, means very little at Wimbledon. As Goran Ivanisevic showed when he won the 2001 title as a wild card, Wimbledon often favours those inherently talented players who can catch fire at just the right time. This is in stark contrast to Djokovic’s winning 2011 style, which has seen him putting more topspin on his shots to give himself a greater margin for error.

Djokovic’s 2011 play paid off before the title match was even played. By reaching the Wimbledon final, he ensured he would become 25th  player to be ranked number one in the Open Era of men’s tennis. However, reaching number one would seem a bit underwhelming unless it came on the back of a Wimbledon title.

While Federer and Nadal’s classic Wimbledon finals have been a case of tactical offense against near-inhuman defence, this year’s final between Nadal and Djokovic featured a more ambidextrous game plan from both sides. Nadal appeared to be pushing harder towards the lines, while Djokovic put even more topspin on his heavy shots to give himself optimal consistency.

Djokovic’s plan paid off; he finished with only 12 unforced errors – three less than the human backboard that is Nadal – against 27 winners, well ahead of Nadal’s 21. Moreover, he recovered from a mental lapse that saw him lose the third set in dismal fashion and won the fourth set, and the championship, handily breaking Nadal’s serve twice in the process.

Djokovic’s 6-4, 6-1, 1-6, 6-3 win over Nadal will not be seen as one of the all-time classic finals at Wimbledon. Djokovic simply did not allow Nadal to play well enough for that to happen. He countered Nadal’s consistency with his own blend of power and precision to devastating effect. More significantly, his win can be seen as validation that he is a legitimate number one and the dominant force in men’s tennis. Photo: Novak Djokovic of Serbia hits a return to Rafael Nadal of Spain during their men’s singles final match at the Wimbledon tennis championships in London July 3, 2011. REUTERS/Eddie Keogh.

Djokovic called Wimbledon “the tournament he has always dreamt of winning”. In beating Nadal for the fifth time this season, he not only came through on the dream that he first had as a youngster in what was then Yugoslavia, he completed an ascent that many experts had predicted and then retracted when he failed to reach the top of the rankings at a younger age. Djokovic was the youngest men’s player to reach the semi-finals or better of all four grand slam tournaments, however, he never seemed able to challenge Federer or Nadal consistently in the latter stages of those events.

That all changed this year when Djokovic put more focus on fitness and flexibility and coupled that with a gluten-free diet. This combination of limber movement and compatible diet has allowed Djokovic to outlast and outhit opponents all year long.

Djokovic was discovered as an eight year old in Belgrade. He was called the country’s greatest talent since Monica Seles, who was also born in what was then Yugoslavia. While his Serbian countrywomen Ana Ivanovic and Jelena Jankovic preceded him in reaching the number one rankings, Djokovic – with his three grand slam titles and new top spot – stands head and shoulders above the rest.

To reach number one is a huge accomplishment – something only 25 men have achieved in the Open Era. Moreover, to reach the number one ranking in an era with Roger Federer and Rafael Nadal, the first and fourth most grand-slam-winning men of all time, is truly an astonishing achievement. With this win, Djokovic has ascended from supporting actor to leading man – and we’ll all be watching to see how high he can continue to climb. DM