Wimbledon 2011: Duel of the grass-court damsels

Wimbledon 2011: Duel of the grass-court damsels 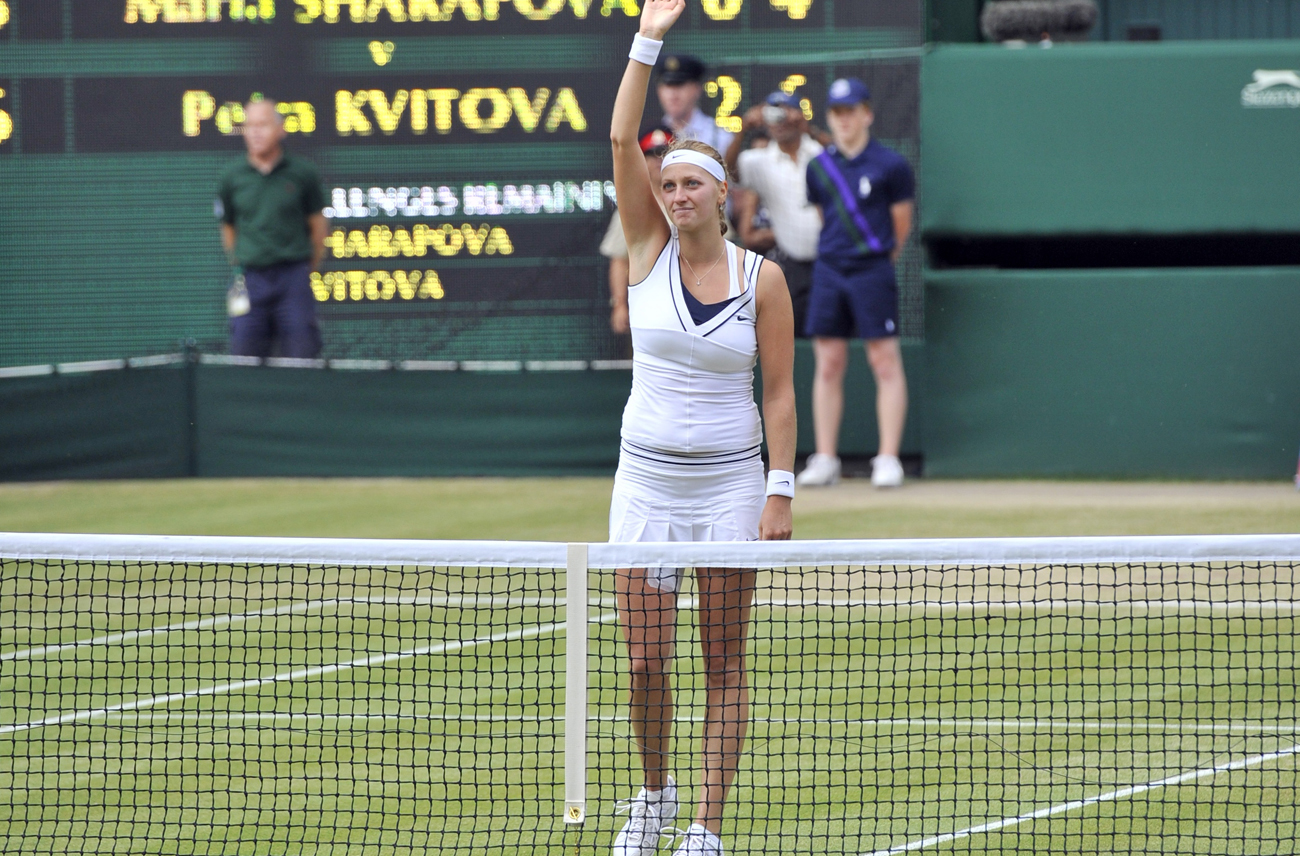 What the 2011 Wimbledon Women’s final may have lacked in high drama or the status of historic contest, the match between the drop-dead-gorgeous Maria Sharapova and the delightful girlishness of Petra Kvitova had the grace and elegance of a royal command performance of women’s tennis. By MICHAEL McCLELLAND.

When the dust settled and only four women remained in the 2011 Ladies’ Wimbledon draw, you could practically hear the pennies falling into Nike’s piggy bank. Four Nike-sponsored European blondes, ranging from 1.78m to 1.88m, clad in chaste white and beating each other breathless on the rain-soaked Wimbledon grass in what is basically the Victorian version of mud wrestling.

With the relatively early departure of the living-legend Williams sisters, Chinese superstar and French Open champion Li Na, and last year’s losing finalist Vera Zvonareva, these four semi-finalists were the best the sponsors – and fans – could hope for. On one side, we had three-time major winner and world’s most famous female athlete Maria Sharapova against a huge hitting German comeback kid, Sabine Lisicki. On the other, we had fourth-ranked Victoria Azarenka against the loveable lefty Petra Kvitova – a surprise Wimbledon semi-finalist last year. Of the four semi-finalists, Kvitova somehow seemed a bit out of place, like the smart, awkward girl on the sorority sidelines. Her wide-eyes, husky frame and shy use of English (surely someone could interview her in Czech) all added to her small-town-girl-on-the-big-stage image.

While European economies may be falling like dominoes, this Wimbledon represented a showcase of European talent. Sharapova hails from Russia, Lisicki from Germany, Azarenka from Belarus, and Kvitova from the Czech Republic. Of the four, Sharapova’s career, and image, are the most illustrious. While Sharapova was the youngest semi-finalist at the French Open, she was the oldest semi-finalist at Wimbledon at the ripe old age of 24. The other three ladies are all 21 years of age. This is exactly what the women’s game needs – an injection of young, fearless talent. Photo: Maria Sharapova of Russia reacts during her final match against Petra Kvitova of the Czech Republic at the Wimbledon tennis championships in London July 2, 2011. REUTERS/Stefan Wermuth.

The semi-finals were relatively straightforward affairs, with Sharapova surviving 13 double faults to beat Lisicki 6-4, 6-3 and Kvitova overcoming a mid-match walkabout to defeat Azarenka 6-1, 3-6, 6-2. A final between the glamorous Sharapova and the goofy Kvitova was set.

The match Kvitova and Sharapova engaged in will not be remembered as one of the great finals – up there with Venus Williams vs. Lindsay Davenport in 2005 or Steffi Graf vs. Jana Novotna in 1993 – but neither was it a blowout like last year’s final, when Serena Williams demolished Zvonareva. Instead, Kvitova played sturdy, bold tennis to take down an erratic if determined Sharapova.

The key to the match was aggression. Sharapova, normally the aggressor in her matches, was forced to play defensively as Kvitova’s heavy shots soared deep into the corners. Kvitova finished the match with a 19-10 edge in winners clearly indicating she was the more forceful player. Most impressively, she did not show any signs of nerves. In a game that has seen countless emotional meltdowns in big finals over the last few years, it was incredibly refreshing to see a first-time grand slam finalist close out a match with poise and nerve. Ironically, she did so in the same way Sharapova won her 2004 Wimbledon title, when, as the heavy underdog, she knocked out Serena Williams 6-1, 6-4 without even blinking.

When Kvitova hit her last serve – an ace – to win the match 6-3, 6-4, she fell to her knees with a look of delight. But not disbelief. There were no tears, no adrenaline-fuelled climbs through the stands to find her shell-shocked loved ones. In a beautiful mix that only women’s tennis can provide, Kvitova looked like that awkward teen and an expectant champion all at once.

Naysayers will point to this result as evidence that women’s tennis is in a state of disarray. But Kvitova, with her beautiful mix of power, recklessness and skill has all the tools to become a legend of the game. If she doesn’t, so what? If nothing else, it was wonderful to see the goofy girl become queen for a day. DM

Main photo: Petra Kvitova of the Czech Republic celebrates after defeating Maria Sharapova of Russia in their final match at the Wimbledon tennis championships in London July 2, 2011. REUTERS/Toby Melville