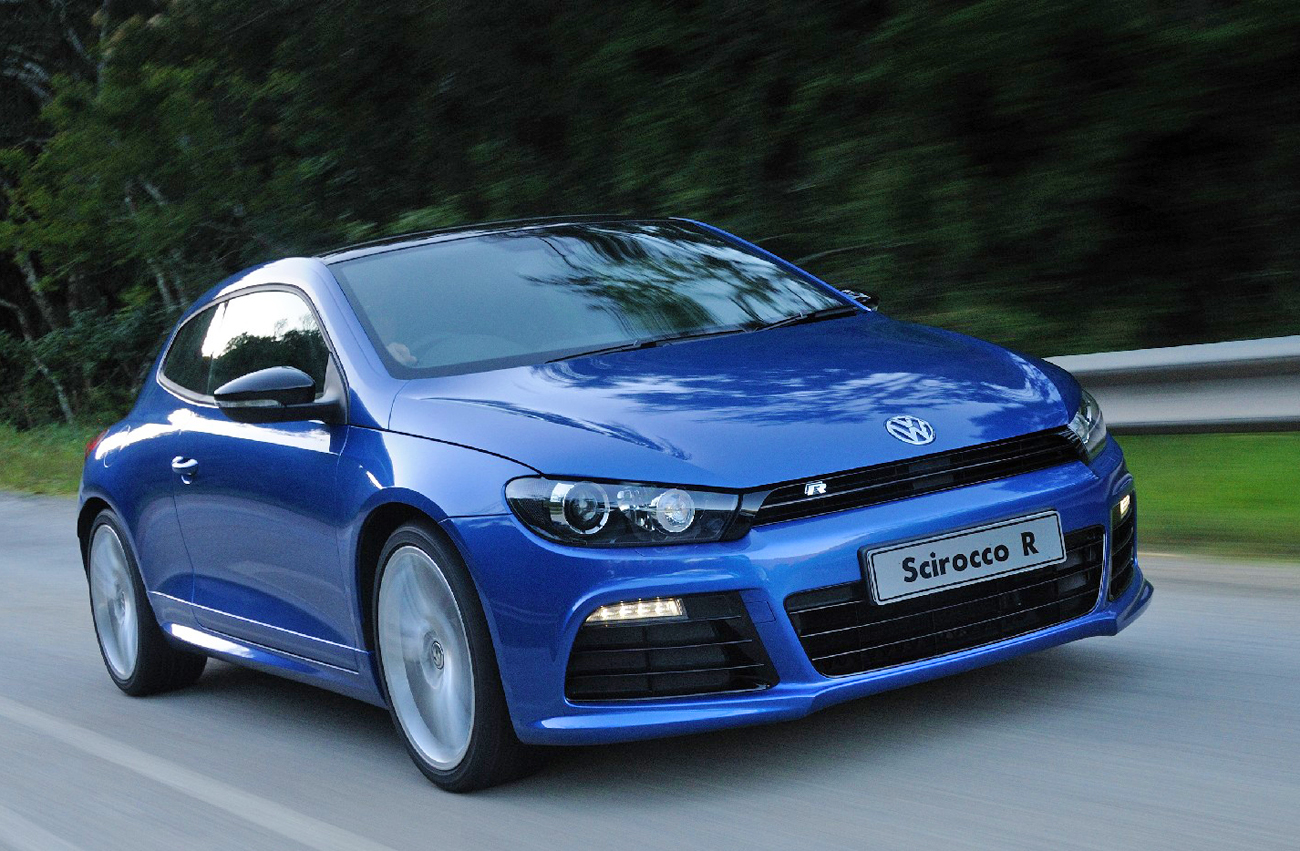 Volkswagen may be one of the world’s biggest producers of mainstream cars, but the Scirocco is proof that it can also come up with striking, aspirational designs. The two-door coupé has already become a firm favourite among those seeking a sporty drive. But this latest addition is about to set the cat among the performance car pigeons. By DEON SCHOEMAN.

The VW Scirocco is to the Golf what the Audi TT is to the A3 hatchback – a head-turning and desirable performance coupé that sources its underpinnings from a volume production model. Which isn’t a bad thing. It not only ensures a proven mechanical package, but also keeps costs down.

However, the Scirocco R is a little more special. It gets a heavily modified two-litre four-cylinder turbocharged engine to bump maximum power to an impressive 188kW, while the torque peak now sits at 350Nm.

If that sounds familiar, it is: The very same EA113 mill also powers the Golf R performance hatchback. But there is one, vital difference, while the Golf is fitted with 4Motion all-wheel drive as standard, the Scirocco R makes do with two-wheel drive only. The result is an edgier, more challenging car that’s certainly less civilised than the Golf. Which, frankly, is a welcome trait. But more about those aspects later. First, let’s take a closer look at the cosmetic traits of this flagship R version.

I’ve never been a great fan of the Scirocco’s shape. Yes, it looks athletic and distinctive, but to me, the roofline is too low, and it looks too wide and strangely squashed.

The R version shares the same, unusual silhouette, but it gets a subtle body kit with new bumpers, larger air intakes and daytime running lights. Sill extensions, a rear diffuser and a bigger rear wing are also part of the aero package.

The result is more aggressive and more menacing than the standard car. A lowered ride height and special 19-inch aluminium wheels fitted with 235/35 high-performance rubber add to the effect. You may also notice that items like the grille and the exterior mirrors are finished in glossy black. It’s certainly a car that attracts a lot of attention.

The cockpit also gets the R treatment. Most obvious are the sport seats, which offer improved support when cornering hard. The instrument dials feature blue needle and an electric blue hue, and are framed by a grippy, flat-bottomed steering wheel. High-gloss black inserts and aluminium details complete the picture.

The more practical aspects of this interior remain, however. Those big (almost clumsy) doors open wide enough to allow fairly easy access to the low-set rear bench seat. And once ensconced, rear occupants will find the accommodation more spacious and comfortable than expected. The boot is pretty decent for a sporty coupé, and offers 312 litres of cargo space. For those needing even more, folding flat the split rear bench seat will boost the cargo area to a huge (for a coupé) 1,006 litres.

The safety kit includes front, side and curtain airbags, Isofix child seat mountings, disc brakes with ABS anti-lock control and electronic stability control with ASR anti-spin regulation. But to really appreciate the Scirocco R, you need to get behind the wheel. Compared to the Golf R we wrote about a few months back, the Scirocco feels livelier and wieldier. The front-wheel drive allows a more direct dialogue with the car, and the turn-in is crisper and more precise, despite the presence of a transverse diff lock.

This car gets the power down really well, and there is no sign of understeer, even when hammering it through corners or scything from apex to apex.

The handling is more entertaining than the Golf too, no doubt  because the Scirocco is wider and rides lower than its hatchback sibling, ensuring a lower centre of gravity. There’s a sense of oneness when driving the Scirocco with intent that really allows the committed pilot to extract the full potential of the coupé. Of course, the XDS diff lock is also part of the magic here. It  works in conjunction with the Scirocco’s electronic limited slip differential (ELD) and allows the power split to be varied between the two front wheels, depending on the available traction.

The result is improved grip and stability when cornering hard, together with more precise steering and almost no understeer. The uprated disc brakes front and rear are well up to the task of containing the Scirocco R’s extra urge when required too.

With 188kW to propel the Scirocco R’s 1,439kg mass, there’s plenty of performance on offer. The power-to-weight ratio of 131kW/ton is enough to propel the coupé from zero to 100 in only 5.8 seconds, while top speed is limited to 250km/h.

The six-speed DSG dual-clutch gearbox works a treat, and is also more efficient than the manual gearbox version (it’s 0.2 sec quicker from zero to 100), but doesn’t quite match the latter’s soul or driving involvement.

For all the high-tech appeal of those paddle shifters, I missed the heft of the gear lever, and the satisfaction of a heel-and-toe downshift. DSG is a bit like Playstation for adults …

While performance-car drivers are perhaps less concerned about fuel consumption than most, the Scirocco R promises to be reasonably thrifty. VW claims a combined-cycle figure of 8.0 litres/100km, but driven with vigour, 11 litres/100km is a more realistic expectation in mixed conditions. When we drove the Golf R a few months ago, we liked its understated presence, and its enhanced performance. But it was almost too civilised, too easy to drive – even compared to a standard GTI.

The Scirocco R is everything the Golf isn’t – exciting, challenging and entertaining. It is more dynamically satisfying and, while it can’t match the space and practicality of the hatchback, it is certainly the more convincing performance machine.

At just under R418,000, this is not exactly a sports car for the masses. But it does prove that the maker of the “People’s Car” can produce a thoroughbred sports car too. DM