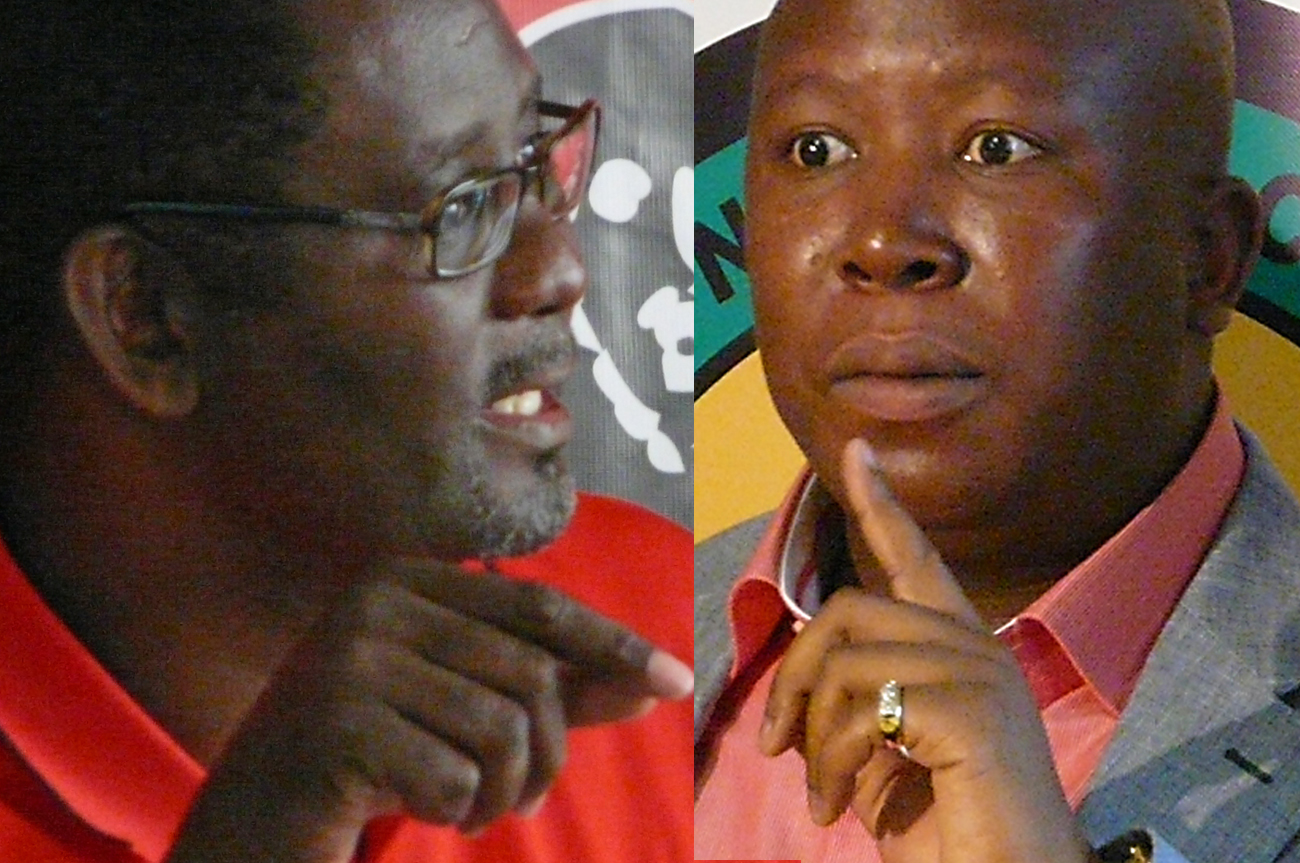 “There is a contestation on the direction of the ANC that is underway. Contestation is fought only by the conscious ones. We are conscious”. And with that, Zwelinzima Vavi and Cosatu launched into battle against Julius Malema and the ANC Youth League. It’s going to be a fight, long, hard and entirely unpleasant. By STEPHEN GROOTES.

No quarter will be asked, and none will be given. Because Vavi has used Cosatu’s central committee meeting to basically make Cosatu’s support for Zuma about this particular contestation. Either Zuma acts, or he goes. It has become about Malema, and Gwede Mantashe. And the playing field is going to be mine nationalisation. And the year is only half over, with Mangaung still 18 months away.

Malema’s world is about to change. For the last six months, essentially since the ANC’s national general council in September last year, until the end of League’s conference 10 days ago, he had the playing field all to himself; there was simply no opposition, and he made all the running.  Then Malema declared “Comrades, we are going to war. A war for radical policy change.” That change was all about mine nationalisation, with a bit of land expropriation without compensation on the side. With that, Cosatu had enough. With a lot of backing from SACPgeneral-secretary Blade Nzimande, who gave the best speech of his recent political past on Tuesday, it’s going to war too to stop Malema.

On Tuesday Vavi delivered his secretariat report to the delegates and then scooted upstairs to a small holding room at Gallagher Estate to answer questions about it. Most political reporters have had copies of the thing weighing them down for days, and so were pretty much bursting. But first there was a question about the conference itself, and in particular the reception Zuma received when speaking on Monday. It was the quietest reception Zuma’s ever had.

And Vavi knows why. “Normally when he comes to visit, the whole hall catches fire, Cosatu comrades stand on their chairs…this time we didn’t get that…a lot of people were trying to send a message that we don’t like where we are now.” As to where we are, it’s about “the rise of a right-wing demagogic movement that preys on the crisis threatening young people in this country” (if you missed our previous lessons, “right wing demagogy” is the Left’s new way of saying Julius Malema…you know, like “proletariat” is a longer word for “poor”). And he says Cosatu members liked “some” of what Zuma said yesterday. But, and here’s the soundbite that matters, “what people are asking for is more decisive leadership, including the problem of ill discipline in the Youth League”. And he says this is something Zuma himself must do, “You call people at night, you tell them where to get off, what is the line, and if they don’t listen, you subject them to a disciplinary hearing.”

In essence, Vavi is saying: Act on Malema. Now. Because otherwise we are all stuffed.

But it’s not just about Malema. We are used to Vavi getting very angry indeed about corruption, and particularly about corruption in government. He’s upped the ante. We didn’t think he could, but he did. He says it’s time to change “this culture” of people staying in office even with big corruption allegations hanging over them. He admits Cosatu was a part of creating this “culture” (presumably by fighting for the right of workers to be presumed innocent”, but then really went for specific people. First, Cooperative Governance Minister Sicelo Shiceka (who hasn’t been seen in public for months), “We have a minister”, said Vavi, “who is alleged to have taken his girlfriend on a first class flight to see a convicted criminal…and society spent eight weeks without knowing if that is true or not”. Then he went for what’s happened in the Eastern Cape Education department, a mess that is now so big that national government is running that particular provincial ministry. He wants all those officials gone.

Then there was the attack on the MacDaddy of the Northern Cape, John Block. “I will go to the Northern Cape, again a chairperson there is facing heavy, heavy stuff, why must he stay as chairman and as an MEC, when the possibility exists for him to use his political power”. We’ve suggested before the ANC needs to watch out when it comes to the provincial strongmen (if you need another lesson, ask the Sunday Times’ Mzilikazi wa Afrika) . Vavi appears to be very worried as well. And he’s now getting to the stage where he’s willing to put his neck on the line on these issues. Again, this time more than before.

Now of course, it’s time for the big question for Vavi, what is going to happen, how is it going to end. Basically, in an over-simplified way, the ANC Youth League and Malema want Mantashe out, Fikile Mbalula in, and the mines nationalized. Cosatu and the SACP want Mantashe to stay, and to stop the League’s version of nationalization from taking place. So the real battleground is emerging, and Mantashe is at the coalface of it (incidentally, he was wearing his red SACP beanie at the conference, so we presume he was wearing that hat; but ask him if you like, and see if you get a straight answer). This is a game of 18 months, and while the starting whistle blew some time back, the opposition is only just now coming on to the field.

So what then, is the balance of forces? Who will win in Mangaung? “You never know” says Vavi, “we usually say a week is too long, we only know a contestation is underway”. He says contestation. What this is really is a battle for the soul of the ANC. Again. Really. It seems to be that serious. Or certainly Vavi says so.

But this fight is going to be in the open. There’s going to be none of the shadow-boxing we saw pre-Polokwane. Instead, we are going to have open fisticuffs in the ring of nationalization, a real grudge match on the field of Mantashe’s position, and a huge bust-up in the streets of our future. We’re glad it’s going to be out in the open. That’s better, the whole nation will be able to see it. But we have to ask ourselves, can the ANC really go through something so bruising so soon. Will it actually survive this. And what will happen if it doesn’t?

And then there’s our perennial question. Can anyone stop Malema? It does look like someone is about to try. DM