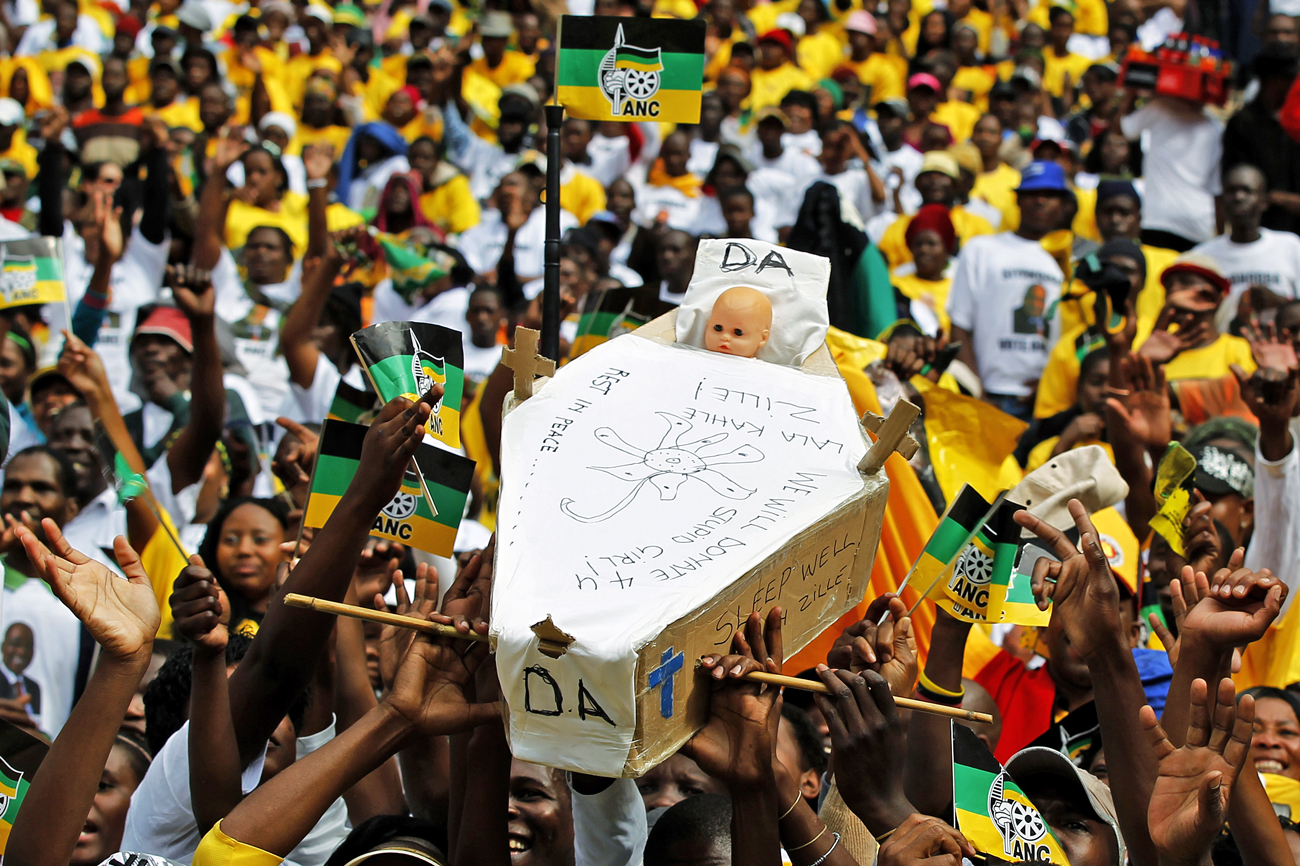 South Africa has a political landscape cluttered with racial jibes, political sniping and name-calling that is alienating, if not already tearing this country apart. Given the massive problems we face - poverty and unemployment among others - political author and journalist Christi van der Westhuizen says politicians should abandon divisive debate for more unifying messages. By MANDY DE WAAL

Julius Malema is an absolute master in using language to buoy his power, says Christi van der Westhuizen, who believes the ANCYL leader is able to project himself way beyond his constituency because of his use of attention-grabbing, divisive discourse.

“Malema specifically reinforces the black-and-white thinking of apartheid identities to shore up his own power, and he does this very successfully,” says Van der Westhuizen. Race, gender and sexuality are all part of Malema’s debating arsenal and Van der Westhuizen says the name-calling, racial and gender stereotyping and demeaning snipes are useful in distracting attention from the real questions the media and electorate should be asking the ANC youth leader.

“In April last year after questions had arisen about Malema’s income, his Sandton mansion and his R250,000 Breitling watch in relatively short succession he quickly undertook a trip to Zimbabwe and afterwards chucked a BBC journalist out of a media conference. The net result of this was that the media, and hence the public, were distracted from revelations suggesting he is basically a kept man, someone with patrons on whose behalf he places issues on the national agenda. They abandoned the search for his sponsors, and instead focused on Malema’s interactions with the journalist (Jonah Fisher) and with Robert Mugabe,” says Van der Westhuizen.

While in Zimbabwe in April 2010 Malema urged Mugabe not to step down, praised the octogenarian autocrat’s industrial and land “redistribution” programmes by saying South Africa had a lot to learn from them.

“The media lost the plot, which shows how successfully Malema can wield rhetoric. He used that trip to shift media attention and the media ended up playing ‘follow the leader’.” This tactic has since been emulated by Jimmy Manyi (Who can still remember why he was suspended as director general?) and Nceba Faku, ANC Nelson Mandela Bay chairman.

“The media has a default obsession with personalities, which makes it very susceptible to the Malemas and Manyis of this world. If, like Malema, you wield discourse cleverly you can manipulate the media. The media is doing a lot of Malema’s work for him.”

Van der Westhuizen says she has seen a radical shift in SA’s political discourse over the past 10 years. “It started with Thabo Mbeki who wielded race in particular ways during the time he was in office. Some of his inputs on race were useful, but we started to move to a political narrative where any public criticism was stigmatised. As a white person you became a ‘racist’; as a black person you were maligned as not ‘truly African’. Mbeki used other labels like ‘ultra leftists’ to  ostracise critics.”

Following the aloof leadership of technocrat Mbeki, the Polokwane palace revolution ushered in populist leadership. “There was a backlash against Thabo Mbeki’s leadership style. Jacob Zuma’s populist leadership style and the ascendance of Malema has seen a cruder use of rhetoric with a direct play on identity to mobilise support,” says Van der Westhuizen. This has even included using the word “cockroach”, notoriously associated with the Rwandan genocide.

The way Malema approaches identity is not inclusive, but exclusive. “While race and racism remain real challenges with which we must grapple, Malema isn’t trying to resolve racism or white privilege in a constructive way. He’s not inviting anyone in, but rather is strengthening ‘in’ and ‘out’ group dynamics through narrow black nationalism. What’s typical is that the identifications he uses to prop up his position are derived from apartheid-type positionings,” says Van der Westhuizen.

Van der Westhuizen believes the media antidote to populist, divisive discourse is critical thinking and reporting that would enable journalists to get closer to the intent of politicians who wield discourse.

“The ruling party hasn’t been able to resolve the primary problem facing its constituency, which is socio-economic inequality that partly runs along race lines. The government also has mostly not been able to deliver on its primary mandate of improving the lives of the majority of people, judging by infant mortality rates, school pass rates and joblessness rates. This has opened the way for a discourse that aims to distract the electorate from their lived reality and attempts to focus its attention on a different explanation for why the ANC is failing to deliver,” says Van der Westhuizen.

“What is interesting is that despite the service delivery protests, voters in those areas voted overwhelmingly for the ANC, which shows this exercise in deflection and distraction is working for some. But, counting both registered and eligible voters, more people have not voted than voted for the ANC in the last few elections, which shows these divisive discourses have their limits at the moment. At the same time, more opposition voters came out in this year’s election, which suggests a responsiveness to the more inclusive discourse the DA employed in a long overdue departure from its ‘fight back’ rhetoric of the past.”

South Africans desperately need to consolidate their democracy. “The apartheid legacy created its own challenges, compounding this we have poverty, unemployment together with health and education systems that are barely working. We have serious problems and need to work together as South Africans, which cries out for a more inclusive discourse,” she says.

“The ANC has a strong tradition of non-racialism. Why isn’t it drawing on this narrative so we can apply our collective minds and move forward? Instead South Africa is subject to the racial and gender slurs of a Malema and the ethnic and patriarchal chauvinism of Jacob Zuma, both of which are completely contradictory to the tradition of the ANC. It seems as if the ANC has been captured by a faction that doesn’t even uphold the party’s strongest traditions.”

Will this divisive discourse characterised by racial polarisation, political sniping, name calling and character assassination by innuendo ever change? It’s wishful thinking, but perhaps more constitutionally minded ANC members would find it interesting to look at the 10 commandments for civil discourse created by a group of Denmark.

The Copenhagen Post reports that Social Liberal candidates have tired of criticising each other and have constructed rules for cleaning up political discourse. These include playing the ball and not the person during debate; seeking real dialogue and defending the rights of others to disagree or think differently; not deriding segments of the populations; responding to critical questions properly; and recognising that political results are created through compromise and negotiation.

Now, what are the chances of these rules ever being followed in South Africa? DM

Photo: African National Congress (ANC) supporters carry a mock coffin during a rally in Soweto May 15 2011. The words on the coffin read, “Sleep well Helen”, in reference to Xhosa-speaking former journalist Helen Zille, leader of the opposition party Democratic Alliance. South Africans will vote in municipal elections on May 18. REUTERS/Siphiwe Sibeko.