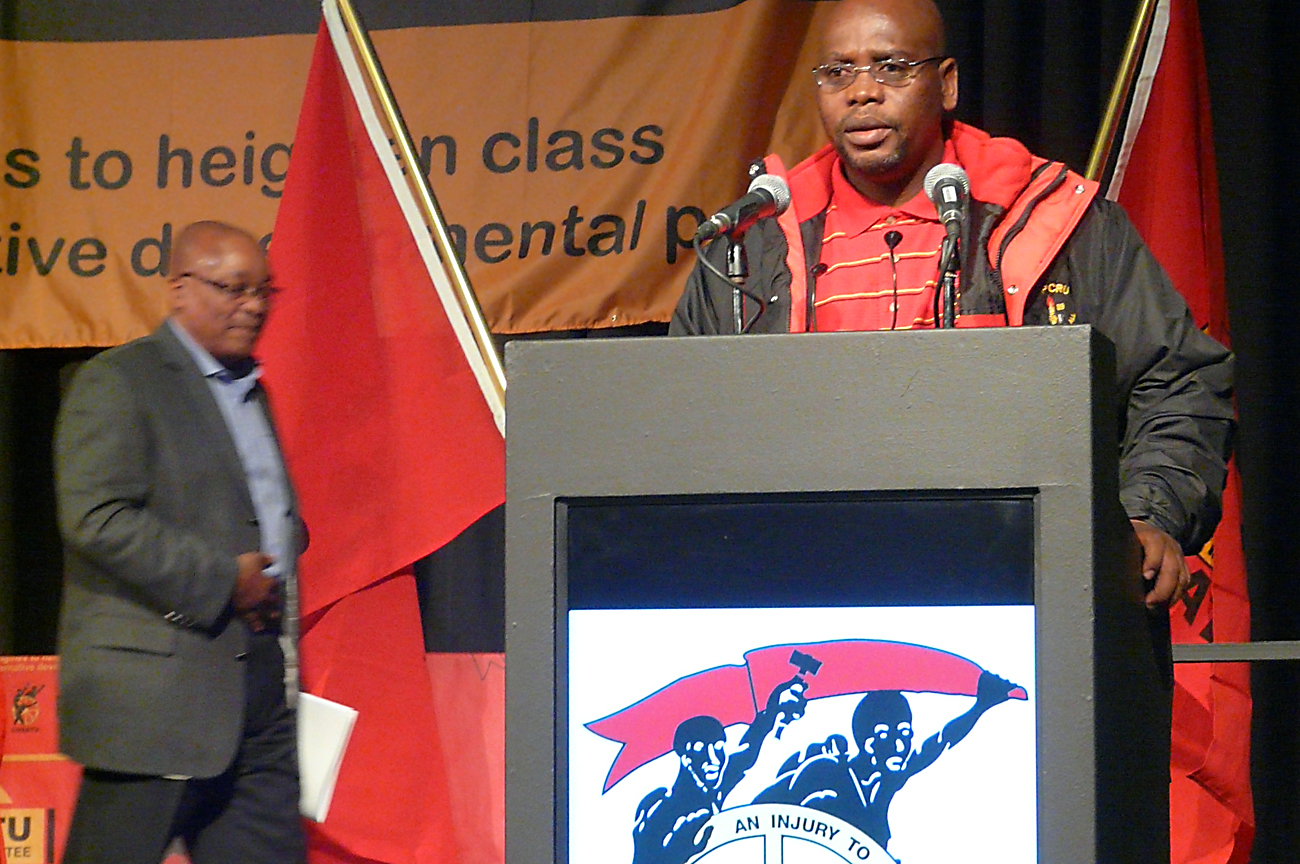 On the first day of the fifth Cosatu Central Committee meeting in Midrand on Monday, two presidents were on the podium. Both lead important Tripartite Alliance partners and what they had to say about the dynamics of the Alliance gave hints as to the burning issues between Cosatu and the ANC. By SIPHO HLONGWANE.

It wearies us to report that we are going to go through a marathon of political conferences, meetings, press briefings and talks before the 2014 national elections. A few days ago, the ANC Youth League had its elective conference, and the Congress of South African Trade Unions (Cosatu) itself started its central committee meeting on Monday at Gallagher Estate in Midrand. We still have Cosatu’s own elective congress, and then the big one – the ANC elective conference in 2013. Put it this way: everyone is going to have something to say about everything.

Cosatu’s central committee meeting is the highest decision-making body of the federation between congresses. It’s a sort of mini-parliament.

On Monday, Cosatu president Sidumo Dlamini had his bit to say. It is often easy to forget Dlamini, what with Cosatu secretary-general Zwelinzima Vavi hogging all the limelight. Dlamini didn’t fanny about. “We are a Marxist-Leninist formation,” he said. And that sums up Cosatu’s stance on everything.

In fact, he didn’t stop there. Cosatu and the SACP would establish classes all across the country to educate the poor so that they would no longer be held sway by “right-wing demagogic forces”. He said, “The poor are fertile ground for demagogues who wear our colours”. Hmmm. Now, who fits that description perfectly?

A complaint we’ve heard before and one Dlamini repeated in his speech was the issue of the New Growth Path, which Cosatu say isn’t aggressively socialist enough. It needs to be more “transformative and redistributive”, the Cosatu president said.

Another declaration or resolution taken at the ANC Youth League conference was on the issue of the current ban by the ANC leadership on any leadership debates leading up to the 2013 conference. Branches can’t campaign and nobody can publicly take sides. This ban was one of the sticks used to beat Julius Malema into submission at his disciplinary hearing in 2010. Well, Cosatu feels differently about that. “Cosatu will respect the ANC’s decisions”, Dlamini said, but they would bloody well speak about leadership issues in private. Not in a “we want to replace Jacob Zuma in 2013” kind of way, but in a “is the leadership doing what we want” kind of way.

We couldn’t help but noticing how coldly ANC president Jacob Zuma was received by the Cosatu central committee. Maybe it is because it genuinely was too cold for singing and dancing in conference hall three. Not even his usual crowd-raiser “Mshini Wami” could elicit any more than a begrudging response from the delegates.

Zuma tackled the leadership-debate issue in his own way. “Our culture has been to engage in dialogue in meetings among ourselves and convince one another on what we believe is the correct thing to do,” he said. “We seem to be closing that space and have introduced a new culture of exchanging views and dealing with the views of other comrades publicly, even before we test such views within our organisations, and with the comrades who hold those views.”

“This has introduced a tendency of attempting to determine policy on our feet, having not gone through the proper process that would normally help to maintain the dignity of the organisation. There is a huge tendency of relying on the media to discuss matters that historically would have been discussed internally first. This may look good for us as individuals and put us in a particular standing in society and in the views of many, but organisationally, it erodes the standing of the organisation and the entire Alliance.

“Without realising it, we introduce some debates prematurely before we have discussed them among ourselves and it creates a space for more disagreement in public on matters that could have discussed and agreed on internally and give leadership on as a united voice,” Zuma said.

Interpretation: it’s too soon to open the leadership debate. Plus, we’re still bruised after Polokwane’s fight.

It is hard to judge what exactly will be important in the Tripartite Alliance going forward. The ANC Youth League is marching for nationalisation and expropriation of land without compensation. Cosatu’s president spoke strongly against labour brokers and said they wanted a redder New Growth Path. And Zuma waffled on for a majority of his speech on what can be described as an inoffensive plan for the country. Everyone is a bit fed up with the ANC on the economic front, but not so much that they would directly disobey the ANC’s ban on campaigning.
It was hardly an auspicious start to a conference that may turn out to be as exciting as watching a cut apple go brown. DM