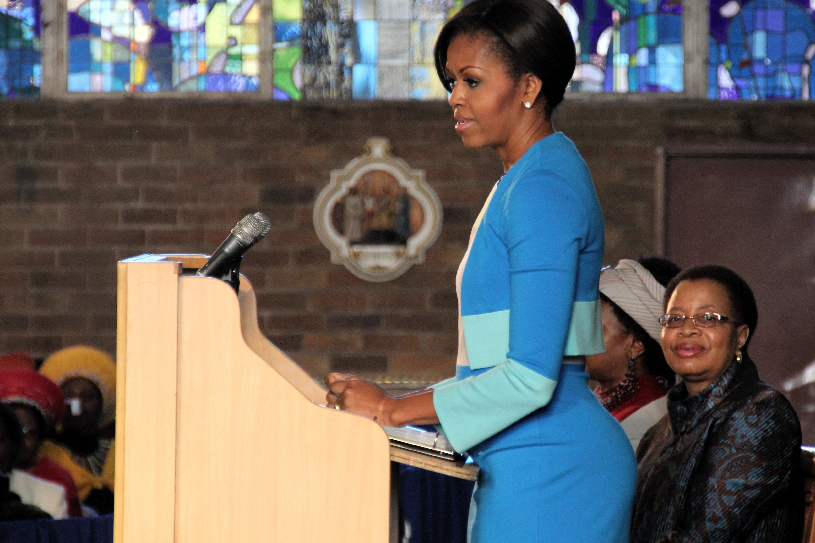 We learnt only one new thing about Michelle Obama on Wednesday: her hugging technique is excellent. It is also a neat analogy for her message to young South Africans: get in close and personal, be warm and genuine, and change the world one interaction at a time. Is it just us, or is that the very antithesis of the approach of a certain local youth leader? BY PHILLIP DE WET.

If you want to hug like the first lady of the United States of America, you’ll have to put some effort into it; we’re not talking a quick pat on the back here. First, make sustained eye contact accompanied by a smile. Not a giant grin or anything, but do show some teeth. Next, lean in to exchange some final pre-hug words, get in close with your chin well over the shoulder of the hugee, put both hands flat against the back of the recipient, and squeeze just a little. Then hold for a good couple of seconds, and don’t forget to close your eyes (long eyelashes help to highlight this) and keep smiling (except no teeth this time). Finally – and this is important – break away as if you are reluctant to do so, with lingering eye contact and maybe a gripped elbow before you move on.

That hugging technique is one reason you’ll find a rapidly expanding pool of Michelle Obama fans in South Africa, but it is part of a broader package. Despite multiple layers of security she comes across as warm and approachable, passionate and caring. It doesn’t hurt that she’s one of the great orators of her generation. And her message to South Africa on Wednesday is that genuine caring can change the world every bit as much as angry speeches, protests and other forms of toy-throwing. Perhaps more so, even if those latter options don’t draw as much attention.

“… while today’s challenges might not always inspire the lofty rhetoric or the high drama of struggles past, the injustices at hand are no less glaring, the human suffering no less acute,” Obama told some 2,000 people in the historic Regina Mundi church in Soweto. Economic growth, HIV prevention, combating corruption, freedom of speech, sexual equality, these are the struggles of the current generation. Acting on a local level and with commitment to change, young people can change the world, she assured her rapt audience. Then she deftly tied the anti-Apartheid struggle to some inspirational young women alive today, showed that America has ever been a friend of the struggle, invoked the optimistic spirit of Bobby Kennedy, and started dishing out those hugs.

It was as masterful a performance as you’ll see in politics, and starkly in contrast with the contemptuous crap that passes for speechmaking in South Africa (the world is literally – literally – turning into a global village, Gauteng premier Nomvula Mokonyane said from the same podium shortly before, reading from a prepared speech). But coming so soon after the ANC Youth League’s elective conference, and Julius Malema’s ultra-militant approach to changing the economic landscape, it was like falling into the middle of a swimming pool filled with candy-floss. As Mail & Guardian editor Nic Dawes challenged on Twitter shortly after Obama’s speech: “7 days and a million miles between the JuJu model of youth empowerment and the Obama version. Choose..”

Obama’s examples of economic empowerment are entrepreneurial, more likely to feature a young person who made it despite the government imposing every obstacle than somebody who received help and encouragement, never mind a tender or farm. In her worldview passion and determination can’t help but succeed, even if slowly and unnoticed. “Your efforts might not always draw the world’s attention,” she told the crowd. “…And the change you seek may come slowly, little by little, measured not by sweeping changes in the law, but by daily improvements in people’s lives.” On the weekend Julius Malema, by contrast, called on young people to act as economic freedom fighters, who aren’t afraid to take what is owed to them and won’t let anybody stand in their way. He blamed the government, the ANC, “white monopoly capital” and even the ANC’s alliance partners for poverty and joblessness, but didn’t call for passion or any such girly stuff.

The reaction to Malema’s approach verged on panic. The reaction to Obama’s was near-universal acclaim. That may not say much about the ultimate efficacy of either, but there’s no contest as to who managed to win the hearts and minds. DM