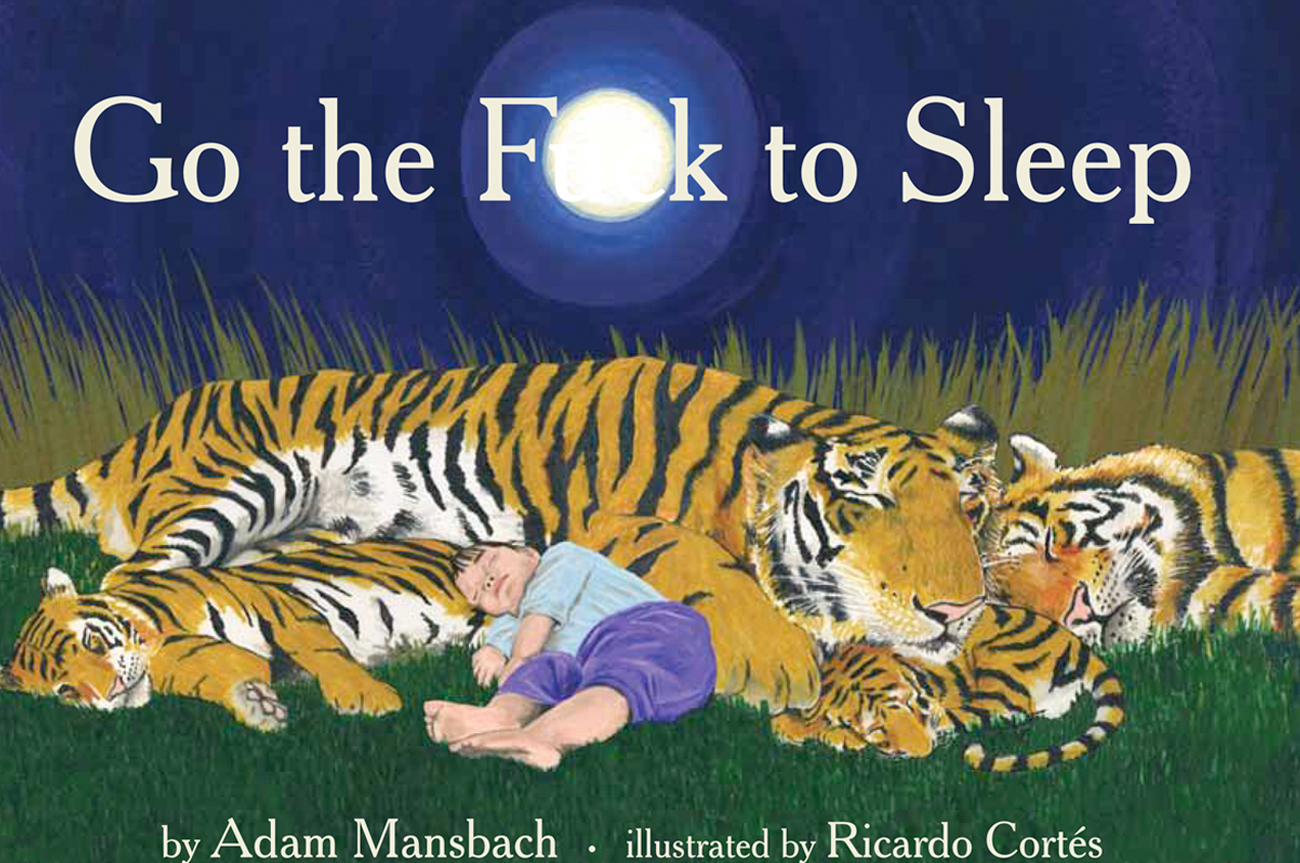 Bedtime. The blight of the parenting class. When the bratlings refuse to nod off keeping mom or dad from the Cab Sav, finishing up work or the third season of “Breaking Bad”, no one ends the day happy. Enter “Go the F*ck to Sleep”, a new bedtime story that addresses this abiding issue, and has taken the publishing universe by storm. By RICHARD POPLAK.

The world is not a happy place. We could list the ills, but you probably have your own taxonomical and qualitative distinctions on its abject crappiness. That said, they all pale by comparison to the nightly ritual of trying to coerce a recalcitrant toddler into dreamland. I don’t have children, but I have friends who do: They’ll shuffle downstairs after a 90-minute ritual combining bedtime stories, begging and not-so-veiled threats, one abiding thought running through their minds: “Why the f*ck couldn’t the little bastard just go the f*ck to sleep?”

Fair question, best answered by paediatricians and neurologists, who remind us that those tiny minds are forging synapses as they lie there on their SpongeBob pillows, absorbing the excitements of the day, building brain circuits like a steroid freak builds quads. Thoughts and memories and cravings for sugar careen around their downy skulls, and the last thing on their agenda is going anywhere near the Sandman. Tired they may be, but they have other priorities.

Thus, the stage is set for war.

Novelists, like real estate developers and domestics and road workers and stockbrokers, are engaged in this battle. Adam Mansbach, he of “Angry Black White Boy” and “The End of the Jews”, has fired off what might be a definitive salvo. He’s written a 34-page tome called “Go the F*ck to Sleep”, aptly fusing the tropes of a bedtime book with the rage of reading one to an ankle-biter who will not let you turn the lights off.

To wit: “The eagles who soar through the sky are at rest / And the creatures who crawl, run and creep. / I know you’re not thirsty. That’s bullshit. Stop lying. / Lie the fuck down, my darling, and sleep.” Or: “The cubs and the lions are snoring,/ Wrapped in a big snuggly heap. / How come you can do all this other great shit / But you can’t lie the fuck down and sleep?”

You get the point: Cutesy imagery thwacking against profanity equals instant guffaws. The book has certainly hit a nerve—after a PDF leaked last month, pre-orders jettisoned it to the top of the Amazon.com bestseller list, and its original release date, set for October, has been bumped up to June. Samuel L Jackson has performed “Go the F*ck to Sleep”; Werner Hertzog has performed “Go the F*ck to Sleep.” The initial run of 300,000 copies should fly off shelves, which is where the book becomes an interesting footnote in the history of indie publishing.

The manuscript first appeared in the electronic slush pile of a Brooklyn-based indie named Akashic Books. Publisher Johnny Temple, who normally concentrates on black and Hispanic literature, was ready to dismiss it, until his wife convinced him otherwise. Other readers were equally adamant. “Publish it!” he was told. The book is illustrated by Richard Cortes—dreamy, acid-trip paintings of kids lying among furry, occasionally deadly creatures—and both writer and illustrator were given a “low four-figure advance,” and will share 50% of the profits. Which, right now, looks like a pretty good deal.

The book has spent the past 56 days on Amazon’s top 100 chart; major pubs have dangled near million-dollar licensing offers; Fox 2000 has bought the movie rights. In all, Akashic has never dealt with a title this big and, if the initial run moves in its entirety, then telling the majors to take a hike will amount to a sound business decision.

Not everyone is amused. WalMart will not be stocking the book nor will other “family first” big box outfits. What’s more, there are thousands of e-copies of the book presently circulating the net, thanks to that leaked PDF. But this is one instance where going viral may actually help bump up real world sales. Without the buzz, it’s hard to conceive of a 34-page book topping Amazon charts on pre-orders alone. Mansbach will soon embark on a national media tour, something Akashic has never had to contend with before, and in an era of doom-and-gloom publishing tales, this one is as happy as can be.

Unless, of course, you’re still battling to put your kids to f*cking sleep. The book lands somewhere between a chainsaw and a blaring television in this regard—it shall not provide the kiddies with any bedtime succour. Rather, it is designed to help parents, and at $12 a pop, catharsis rarely comes this cheap. “It captures the frustration of being in a room with a kid and feeling like you may actually never leave that room again,” Mansbach told Associated Press, “That you may spend the rest of your life in that dark room, trying to get your kid to go to sleep.” Now, parents can reach for some post-bedtime reading, sound in the knowledge that even Samuel L Jackson shares their pain. DM