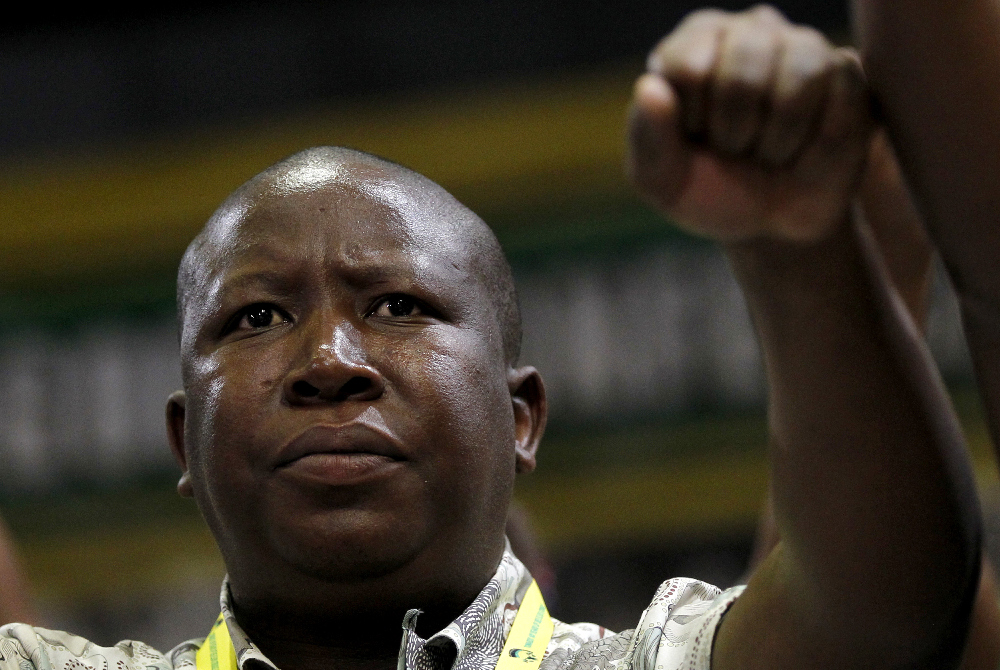 Julius Malema can be heated when he wants to be, but in his closing address to the assembled representatives of the ANC Youth League he was as angry as we’ve ever seen him. Why? He doesn’t want the ANC meddling with the League. Or, to read it another way: I have the unified Youth League I wanted. Come do your worst. By SIPHO HLONGWANE.

The most important speech of the last day of the ANC Youth League’s elective conference was always going to be Julius Malema’s – as the newly elected president. And boy, did he give guns to all who oppose his plans. It was mesmerising to watch.

Malema was very clear about the fact that from here forward, the big issue for the ANC Youth League is going to be the nationalisation of mines and land expropriation without compensation. These are not ANC policy yet, but if Malema’s ANCYL has its way, it will be.

“We need the ANC to declare that we are in an economic struggle,” Malema said. “Once that declaration is made, everyone will work towards economic emancipation. Our focus must be on economic freedom.”

“Polokwane said that willing-buyer-willing-seller has failed. What are you defending? We must take this land without paying. If you come with a different proposal, we will listen,” he said.

His strongest words were reserved for what he called people within the ANC who use the ANCYL in factional struggles. He alluded very strongly to the fact that there had people trying to buy Youth League votes in Mpumalanga and KwaZulu-Natal. “The youth are not empty buckets to be filled with empty lies. We want to be taught proper politics. Not the policy of factionalism. You want us to respect you when you plot [against] kids,” Malema said.

Malema also attacked the ANC’s reluctance to allow debates around the 2012 leadership battle (a quote we’d heard when he briefly allowed the media into a closed session). He said, “This thing that we must wait with a whistle for someone to say we can discuss our leadership is making it difficult for members to sit down and discuss leaders. This issue that we cannot talk about leaders undermines our campaign to strengthen the ANC. This must not be seen as a motion of no confidence. We cannot be technical about leadership. We must be honest every day with how our leadership walks. Why should the leadership feel so proud to sit down and plot [against] Youth League leadership?”

Sitting at the table on the stage, and privy to all this, was deputy president Kgalema Motlanhe. He is massively popular with the League, but is nonetheless a leader of the ANC. How happy was he with all of this? Not very, would be our bet.

The gist of Motlanhe’s own speech, which he gave before Malema spoke, was that the ANC and the Youth League should be united. He even suggested regular meetings between the two secretary general offices so they could compare notes.

Motlanthe said: “Unity is important. Let no man drag you so low as to hate. Apha kuKhongolose sithi asinamona, asinanzondo, siyawudumisa nje uKhongolose. (We say in the ANC we have no hate, no jealousy, we just praise the ANC.)”

There’s no doubt that Malema got exactly what he wanted at this elective conference. He’s now been emboldened by this weekend’s success to take on his detractors, especially within in the ANC proper. Whoever his opponents are, they are going to have to seriously recalculate their moves against the ANCYL president.

But perhaps the people who will take the most offence to the Youth League’s conference is Cosatu and the SA Communist Party. When delivering the Congress Declaration, ANCYL NEC member and spokesperson Floyd Shivambu said: “In the absence of the vanguard of the working class, Congress resolves that the ANCYL should be the vanguard.” Take that, Zwelinzima Vavi and Blade Nzimande!

Malema’s new power opens up entirely new problems for the ANC. As far as the Youth League is concerned, he is omnipotent. He’ll be tempted to carry that attitude into the ANC. Winnie Madikizela Mandela delivered a warning to him on that, saying, “Avoid the dangers of unanimously anointed leadership. We cannot go through Polokwane again.”

Or to put it in plain English: we had an arrogant leader before (clue: he smoked a pipe, and was a fan of Langston Hughes’s poetry). Look what we did to him. DM