Malema to Zuma: Nationalise, or else 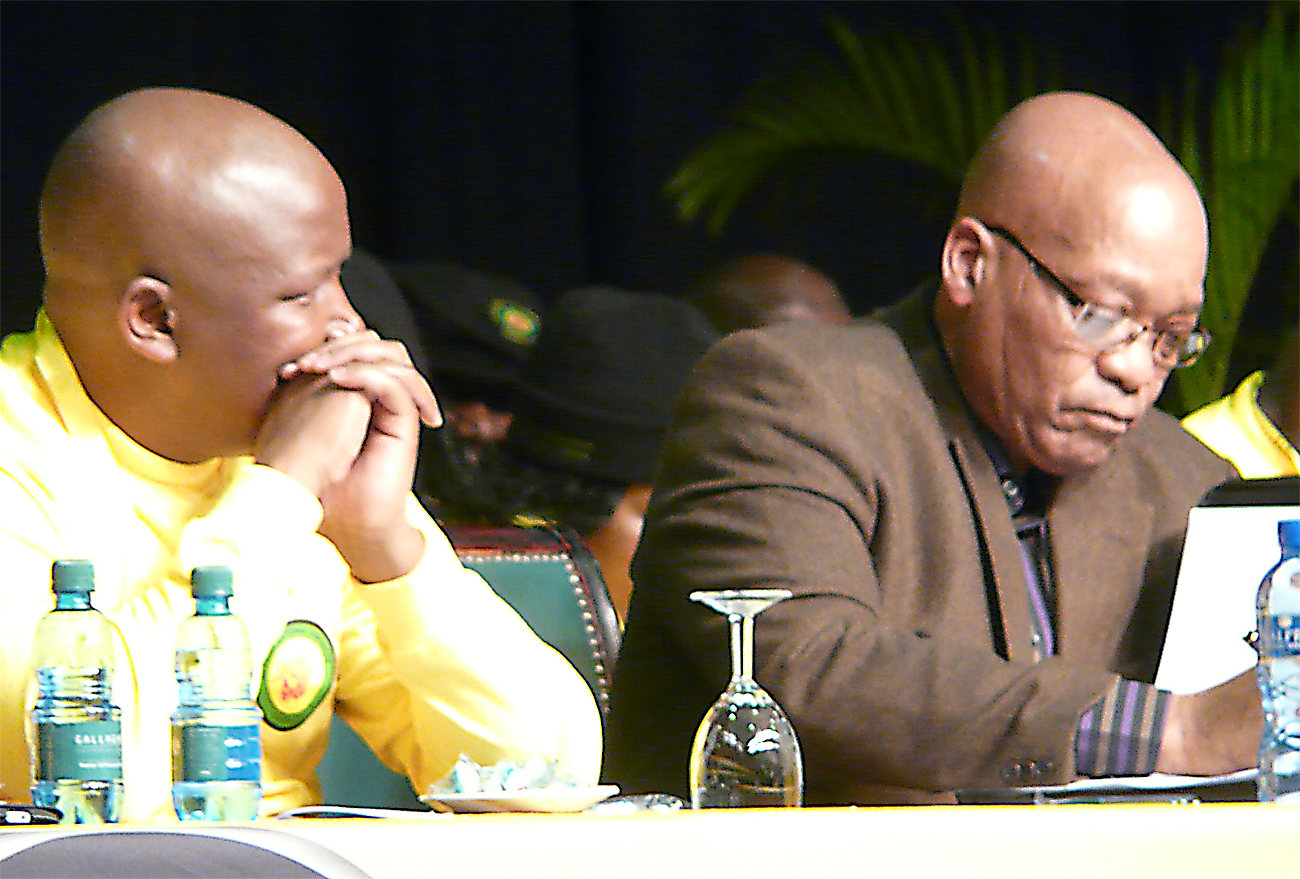 When Jacob Zuma and Julius Malema slugged it out at the ANC Youth League’s national conference, it was enough to get 5,500 pulses racing. Well, part of it at least. By STEPHEN GROOTES.

It’s difficult to think of a more fitting image of Jacob Zuma’s presidency. Youth Day in Soweto, where it all actually began back in 1976. Zuma. Orlando Stadium. Empty. All because of his inability to prioritise, on a national day. Because of various political debts, because of an inability to say ‘no’.  At the end, thousands of people thought, stuff it, and left. And so he made what was no doubt an empty speech to an empty stadium.

Just an hour before, the Youth League watched a fascinating slugging match.

If The Economist considers Tony Blair the greatest amateur actor of his generation, perhaps we can be justified in calling Malema the greatest non-professional stage director of our time: everything was managed just the way he wanted it. From the ANC Youth League spotlight that flicked across the roof, to the way people behaved as they walked in. It bore the stamp of a man who really does want the trains to run on time. Yes, we know who originally said that, and no we don’t know if Malema also has a thing for black uniforms.

Of course, the main event was never going to be Malema vs Lebogang Maile; it was always going to be Malema vs Zuma. The reaction of a crowd is always a subjective thing, one man’s applause is another’s rapturous reception. We have to say we were surprised by the amount of applause for Zuma. There was a spontaneous rendition of “Umshimi Wami” for good measure. And when someone went through the list of names of presidents, the applause was intriguing. Thabo Mbeki, polite. Kgalema Motlanthe, more than polite, less than effusive, Jacob Zuma, oh gosh are people excited. Julius Malema, well, the roof of the main hall was almost blasted off. The peak of the volume was probably Malema’s entrance, choreographed with Zuma. Like back in the old days when Mbeki and Zuma used to do exactly the same thing.

Anyway, on to the main speeches.

Malema started with a bouquet for Zuma. “We are your protectors” he said, “We will always protect you… we are happy to be under your leadership”. Now, look, this is a tune that has changed several times over the last few months. When Malema stood up he looked a little under the weather. Zuma had no such problem, and looked as cheerful as we’ve ever seen him.

But Malema has yet to make a speech without some kind of challenge. And his shot across Zuma’s bow was characteristically direct. “We have yet to see if this leadership has the potential and the political will to take on the mining capitalists” he said. A possible translation; Zuma, nationalise, or go.

There was something similar on land, Malema’s other hobby horse. If we don’t take land without compensation he said “a 100 years from now, when we’re gone, our children will still be living under white economic domination”. It’s an interesting point. Most economists will agree that land rights are the basis of everything else. On one reading, Malema is right. On another, of course, the complete chaos that would result would hardly create a better life for anyone, apart from a lucky few.

Some more bad news for us capitalists came with his broadside against government’s employment subsidy scheme. “We shouldn’t entrust the private sector with job creation, that is potentially dangerous”. Ah. Okay, we are evil, we get it. And while he was there, there was a pretty blatant dig at Trevor Manuel, “We have a planning minister, celebrated by capital, who has yet to show the country a plan”. Typical Malema, being “clever” by insulting the intelligent.

Then there was Libya. It is amazing that in this day and age we have a large body of opinion in this country that thinks dropping bombs on someone as hateful and awful as Muammar Gaddafi is wrong. That protecting innocent people from his evil is wrong. But Malema is one of them. There was a rant about “blood and oil-thirsty imperialists who are invading Libya”.

Zuma was less fiery. In fact, he was so insipid, that many of the delegates took the opportunity to have a quick 40 winks. Some had 80. To be fair, they’d been on buses overnight. But no one slept during the Malema show. Zuma’s shock and awe soundbite on nationalisation, “We have set up a group to study it and report back”. Inspirational stuff. On land, “We are looking at ways of speeding up land restitution”. Gee, get the heart pills someone. On the economy there was the bland, “The ANC is the only organisation that bring[sic] economic liberation”. Things perked up a bit when he said, “Western countries have abused the resolution on Libya”, but that was the only bit worth staying up for.

Overall though, we are intrigued by how nice Malema is being to Zuma. Is he changing his tune, has Zuma found that picture of him with a five legged goat and is threatening to put it on “Twitterer”? Has the balance shifted somehow? Or is Malema just sorting out his bargaining position for later? It’s difficult to tell at this point.

One thing does seem to be clearer though. Malema is well in charge. It’s traditional to poke fun at the League’s inability to do anything on time. But this time, they were running around three hours late. That’s still six and a half hours earlier than their last big gathering, their national general council in last year, which was scheduled to start at 9:00 and began at 18:30. That’s a mark of discipline, of Malema’s control of the registration process, and the fact that this conference really doesn’t appear to be contested.

Does all of this mean we have to face the prospect of the impossible. The unthinkable, the really-it-can’t-happen, it just can’t. A boring ANC Youth League conference. Somehow, we doubt it. But as we like to say in South African politics. You just never know. DM