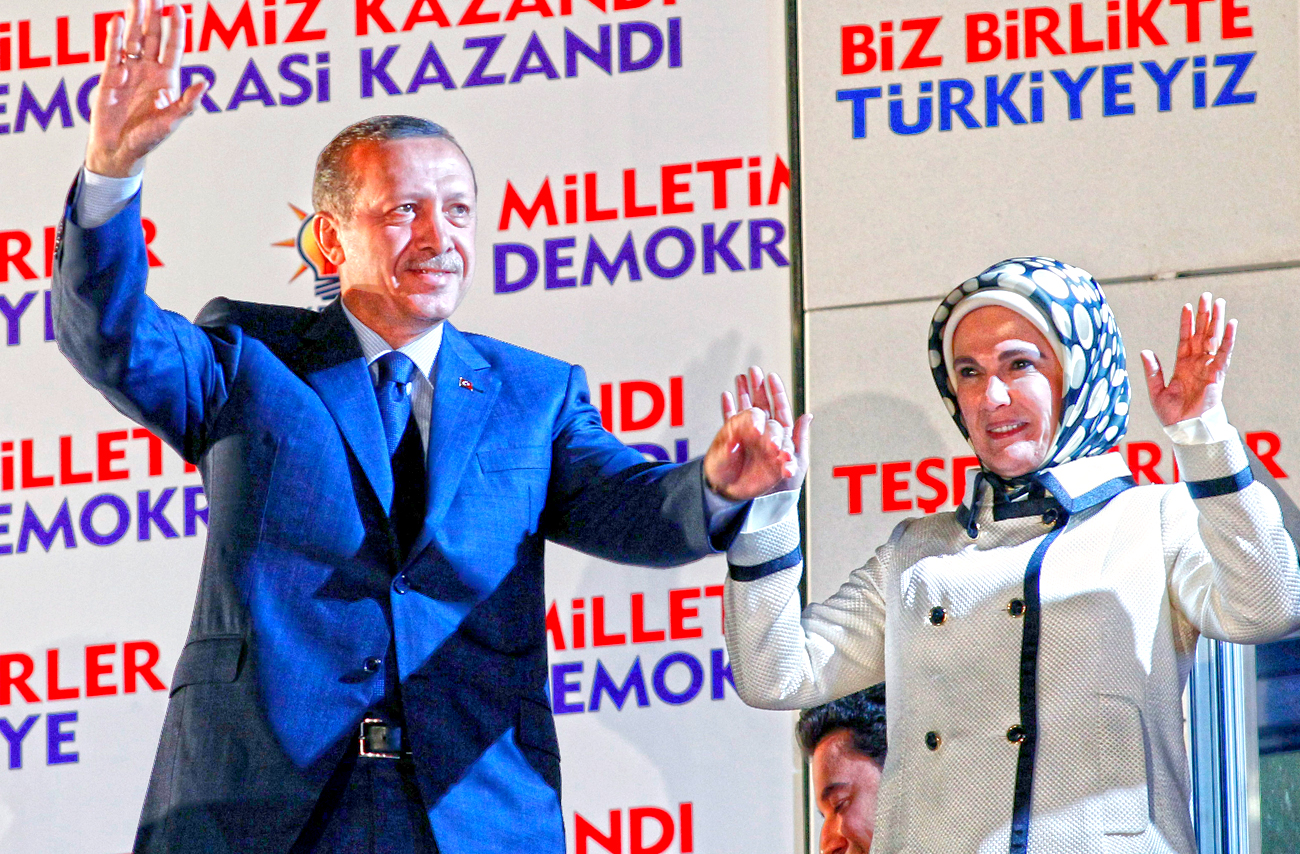 Fifteen years ago, Turkey’s current Prime Minister was in jail, charged with undermining the state. Yesterday, his party was re-elected for the third time with an increased majority, and he has become the most influential leader in the Islamic world. His is the story of a remarkable politician and the re-awakening of the sleeping giant of Middle East politics. By SIMON ALLISON.

It was a poem that got Recep Tayyip Erdo?an locked up all those years ago. He read it at a public gathering in an obscure town. “The mosques are our barracks, the domes our helmets, the minarets our bayonets and the faithful our soldiers…” was the offending line. To most of us, it’s innocuous enough, but it was religious napalm in the eyes and the courts of the paranoid secular military bourgeoisie who had been running Turkey ever since Mustafa Kemal Ataturk forged the state from the ashes of the old Ottoman Empire.

Erdo?an, then mayor of Istanbul, represented an explicitly religious party and his poem, which conflated the military with religion, was deemed an un-Kemalist activity. He violated the golden rule of Turkish politics, enforced more strictly than even the drafters of the American constitution could have envisaged: At absolutely no time should politics and religion mix.

It was after his release that Erdo?an realised he could never achieve serious power in Turkey without ditching his overtly religious stance. The military, guardians of Ataturk’s legacy have been known to stage the odd coup or two in defence of it, would never stand for it. So he set up his own party, the AK Party, with his top lieutenant Abdullah Gul (now Turkey’s President, a largely ceremonial role, although Gul remains an influential figure). The AK Party is a moderate conservative party, with no stated goals to establish a theocracy or introduce Sharia law, and it swiftly gained a following, particularly in the country’s more conservative rural areas.

Not that Turkey’s traditional ruling classes ever took their manifesto at face value. I was in Istanbul in 2002 when the AK Party won its first term in government. The scaremongers were out in force that day. Istanbul is the country’s liberal heartland, and the general feeling was that Erdo?an, in the guise of a moderate, would take Turkey straight down the fundamentalist path of Iran, Afghanistan or Saudi Arabia. After all, Erdo?an is openly, unashamedly Muslim, and his wife wear a headscarf – a provocation in a country where, until the AK Party recently changed the laws, headscarfs were banned in public places. Turkey’s president Sezer in 2002, a venerable old secularist, refused to invite Erdo?an’s wife to public occasions because of it. But since taking power, Erdo?an has calmed the furore over his party’s religious background through sensible economic policies and a moderate approach to religion. He’s also taken steps to neuter the military, prosecuting a number of military top brass and high-profile civil servants on charges of plotting against the state; a move which has proved successful given his continued hold on power. And he’s won around many sceptical Turks, as his ever-increasing electoral democracies demonstrate. The AK Party’s share of the vote on Sunday was 50%, and they fell only four seats short of a two-thirds majority in parliament, which – like in South Africa – would have given them the power to change the constitution.

But it is in the foreign policy arena where Erdo?an’s government has made the most impact. Although paying lip service to the idea of Turkey joining the European Union, talks have stalled in the last 10 years and the prospect of a European Turkey looks increasingly remote. Not that either side really minds; Europe never warmed to the idea of welcoming 74 million Muslims into its fold, and Erdo?an was looking in the other direction, to the Ottoman Empire’s old dominions across the Middle East. Turkey is in many ways ideally poised to take the mantle of Middle East leadership which has been left vacant since Sadat’s Egypt took America’s money and signed the peace deal with Israel. As a majority-Muslim state with a thriving economy and a fully-functional democracy, it is the West’s ideal of what a Muslim state should be. And with Erdo?an’s suspected Islamist tendencies and his administration’s proven track record of standing up to America (for example by denying the US the use of Turkish air bases during the Iraq War), Turkey has buckets of legitimacy in Arab countries.

Turkey’s highest-profile foray into the diplomatic arena was last year, when the country organised and sponsored the infamous Gaza Flotilla – six boats packed with prominent civil society members and supplies sent to break Israel’s naval blockade of the Palestinian territory. The boats were stormed by Israeli forces, causing the death of nine activists and dozens of injuries. The incident unleashed a storm of criticism of Israel’s heavy-handed reaction, giving the country a serious diplomatic black eye.

More recently, Turkey has found itself uniquely placed to take advantage of the Arab Spring. It’s no coincidence that the first diplomats into Cairo after the fall of Mubarak were Turkish, or that Turkey is being asked to mediate the Syrian crisis. Turkey represents a Third Way, a path that is neither Islamic fundamentalism, which enjoys little serious support across the Arab world, nor American-style democracy, the fruits of which Arabs have seen for decades in the form of their American-sponsored dictators.

Erdo?an’s AK Party is the best alternative model. It is the future of political Islam, incorporating both Islam and democracy, and showing that the two are not incompatible. Ataturk might be rolling in his grave, but Erdo?an is on the brink of assuming the leadership of the Middle East and will define the politics of the region for the next decade. DM

Main photo: Turkey’s Prime Minister Tayyip Erdogan, accompanied by his wife Emine Erdogan, greets his supporters at the AK Party headquarters in Ankara June 12, 2011. Erdogan’s ruling AK Party was set to win Sunday’s parliamentary election with 50.2 percent of the vote, but looked unlikely to get enough seats to call a referendum on a planned new constitution. REUTERS/Umit Bektas.