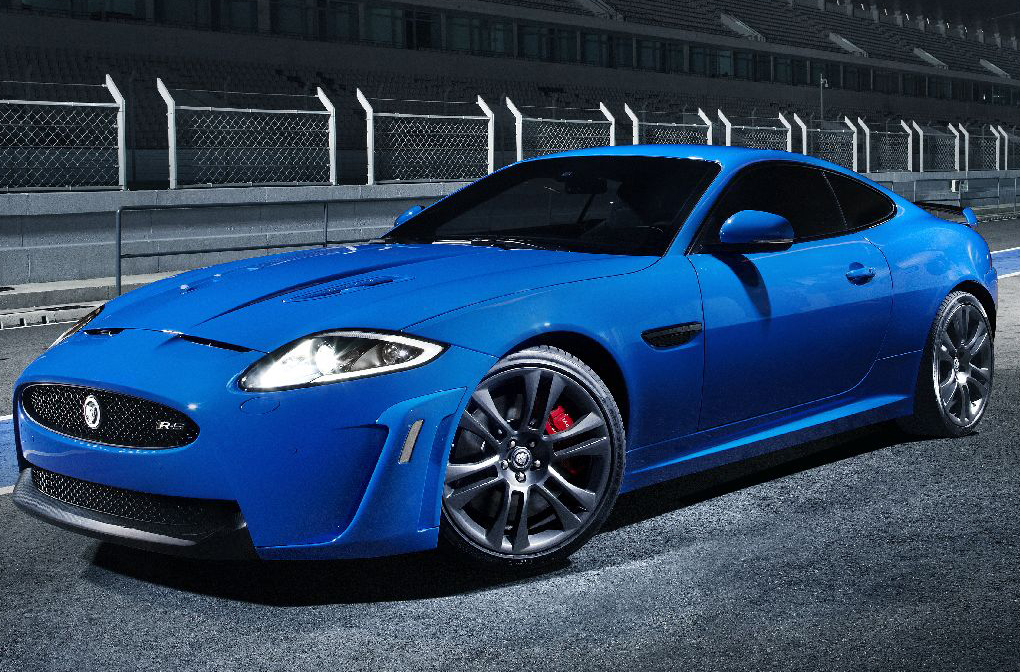 Blue. It’s the hue of the clearest summer sky. The cobalt of the ocean at its deepest. The frozen azure that tinges ice caps in the Arctic cold. But if you happened to be at the Autódromo Internacional do Algarve, in the hills overlooking Portugal’s version of the Riviera, blue belonged to Jaguar, and specifically to the all-new XK-RS. By DEON SCHOEMAN.

Jaguar is the gentleman of the automotive world. The Leaping Cat may still look aggressive on the bonnet of a Jaguar car, but the vehicles are refined, aristocratic expressions of the modern motoring art.

Some, like the XK-R sports coupé, could be described as fast, if hardly furious. But despite a supercharged engine producing prodigious portions of power , the focus of the XK-R has always been a benign, discreet, stiff-upper-lip driving experience.

But there are exceptions to the rule. And one such very welcome exception is the Jaguar XK-RS. Parked in the broad pit lane of the Autodrómo Internacional do Algarve, it looks menacing and impatient: A high-tech horse champing at the bit. Every inch of this coupé is decked out in blue – French Racing Blue, to be exact. Which seems a bit ironic, given that the car’s origins are oh-so British, and that its current owners are a giant Indian industrial concern.

Talking of which, this XK-R is extraordinarily extrovert by Jaguar standards. The understated presence of the standard version has made way for an array of wings, spoilers and splitters that are more Bollywood than British.

Not that there’s anything frivolous about the XK-RS. It’s clearly a sports car that means business and the aerodynamic add-ons signal a sense of performance purpose. The XK-RS has the thousand-yard stare of an athlete in the starting blocks. The new, slimmer headlights frame a sterner, more pronounced grille, while power vents on either side, a hungrier lower air intake, and a carbon fibre-trimmed splitter all indicate close attention to airflow and aerodynamics.

In profile, the large, black alloy wheels and sticky Pirelli rubber fill the pronounced wheel arches to the brim, while the extended sills emphasise the Jaguar’s low, hunkered-down stance.

At the rear, it’s the large, fixed wing that attracts the most attention, promising the kind of downforce only real racing cars need. The rear diffuser promises further aerodynamic assistance, and is also home to the chromed presence of two large-bore exhaust tailpipes.

The result is a car that looks more motorsport machine than road coupé. All it needs are the numbers on the doors, the sponsor’s sticker on the windscreen, the racing suit-clad driver behind the wheel – and a challenging circuit to put its dynamic talents to the test.

I’m a poor substitute for The Stig, but he would approve of the track I’m about to explore. The 4.7km circuit twists and shimmies its way through the dips and over the rises of the hilly terrain out of which it’s been carved. In a fast car, it’s like riding a roller coaster – and the XK-RS is anything but slow!

Cranking the starter instantly wakes up the five-litre alloy V8 under the Jag’s long, swooping bonnet. There’s a metallic rasp from the exhaust, an ominous rumble from the engine bay and you can feel the car come alive even before it’s turned a wheel. The V8 is a fine piece of kit:  5,000cc exactly, equipped with a Roots-type supercharger, and tweaked to deliver a prodigious 405kW of maximum power – 40kW more than the standard model.

The torque peak is elevated to 680Nm. Impressive stuff, but Jaguar’s engineers are even prouder of the fact that the big engine emits less than 300grams of CO2 to the kilometre: 292g/km, to be exact.

The XK-RS retains the normal version’s six-speed auto gearbox, which somehow doesn’t suit the racier, hard-core character of this car. It cries for the meaty shift of a manual gearbox, or the incisive, percussive cog swaps of a dual-clutch transmission. Yes, you get the F1-style paddles on either side of the steering wheel, and yes, the electronic blip throttle on downshifts. But the polish and refinement of the auto box is out of character here.

Right now, though, it’s the XK-RS, me and the track. Exiting the pit lane, there’s something eerie about the empty stands. But soon, I’m engrossed in the challenges the circuit presents.

Of the 15 corners, nine turn right and six left. But what the diagram doesn’t tell you is how undulating the course is. Blind rises, sudden dips, off-camber gradients, double apexes – even a long straight with an abrupt drop just before the braking zone – makes this Europe’s most taxing and more technical racing circuit.

It’s a tough proving ground for the XK-RS, especially since it has to make up for the ignorance of its driver. The problem is that the Jag gathers speed so rapidly, but so unobtrusively, that I tend to plough into corner after unknown corner far too quickly.

As a result, the poise and composure of the XK-RS are repeatedly put to the test. Braking too late and turning in too early is no way to keep a car, and a fast car at that, on the black stuff, but the Jaguar obliges without complaints.

It also shows off just how much work has gone into the chassis. Riding 10mm lower than before, the suspension is taut – stiff, even – but retains enough damping to retain a measure of smoothness. The dialogue between car and driver is unambiguous: you know exactly what the XK-RS is doing and steering input becomes instant and intuitive. The Jag always feels planted and confidence-inspiring, but there’s a nimbleness and edgy energy that thrill and challenge. While the standard XK-R is suave and sophisticated with a dash of sportiness, the ‘S’ scrapes off some of that veneer and exposes the essence, the soul, lurking beneath it.

Even the aural experience is thrilling. The V8’s menacing growl becomes a metallic-laced roar as the revs rise, and under trailing throttle, there is a detonation-punctuated crackle and pop that’s race-car authentic.

After a few laps, my progress around the Algarve track has become more fluid and more assertive. The Jag no longer has to rescue me in some of the trickier turns and I can start attacking the apexes. It’s an exhilarating experience and one that fuses the intentions of car and driver into a cohesive, thrilling whole.

Jaguar says the XK-RS is the fastest production car it has ever produced. The factory figures lay claim to a 0-100km/h sprint time of 4.4 seconds, and a top speed of 300km/h. In reality, the Jag gets off the line with the alacrity of a scalded cat, lending credence to those claims.

But there’s not enough space on this track to try out the top speed – though I can tell you that the speedometer indicates 245km/h at the end of the main straight if you’ve strung a half-decent lap together and that there’s plenty more on tap. The XK-RS provides an “office” perfectly suited to the task. The new, high-backed seats can be electrically adjusted in every dimension, providing form-hugging support when you start pulling Gs through the tighter stuff.

The grippy steering wheel has a thick, leather-clad rim, and the footwell is occupied not only by alloy-fashioned pedals, but by a decent footrest too. A mix of metallic trim and carbon fibre-look leather adds a suitably racy edge, while the ergonomics are driver-focussed, and rightly so.

Although nominally a 2+2, the XK-RS really only offers space for two occupants, plus luggage. The two upholstered indentations masquerading as rear seats are best ignored, at least for human accommodation.

After a few engrossing hours on the track, an excursion into the Algarvian countryside proves that the XK-RS isn’t just a track tool, but an impressive road machine too.

On the narrow, bumpy and undulating roads that embroider the hills above Faro and Portimao, the Jaguar shows its class, soaking up the worst of the bumps and dips without losing its razor-edged road manners or keenly honed reactions.

The Jaguar XK-RS is a fine car – perhaps the British brand’s best since the immortal E-type, which fittingly celebrates its 50th anniversary this year. It has all the right ingredients – power and performance, sublime handling, and a unique character that will have even the most jaded petrolhead’s heart beating faster.

It reaches South African shores in early October, at a price that has not been finalised, but will certainly run into seven digits. Even so, expect the order book to fill up quickly.

And if your name is on that list, make sure you order the XK-RS in blue. Lightning blue. DM