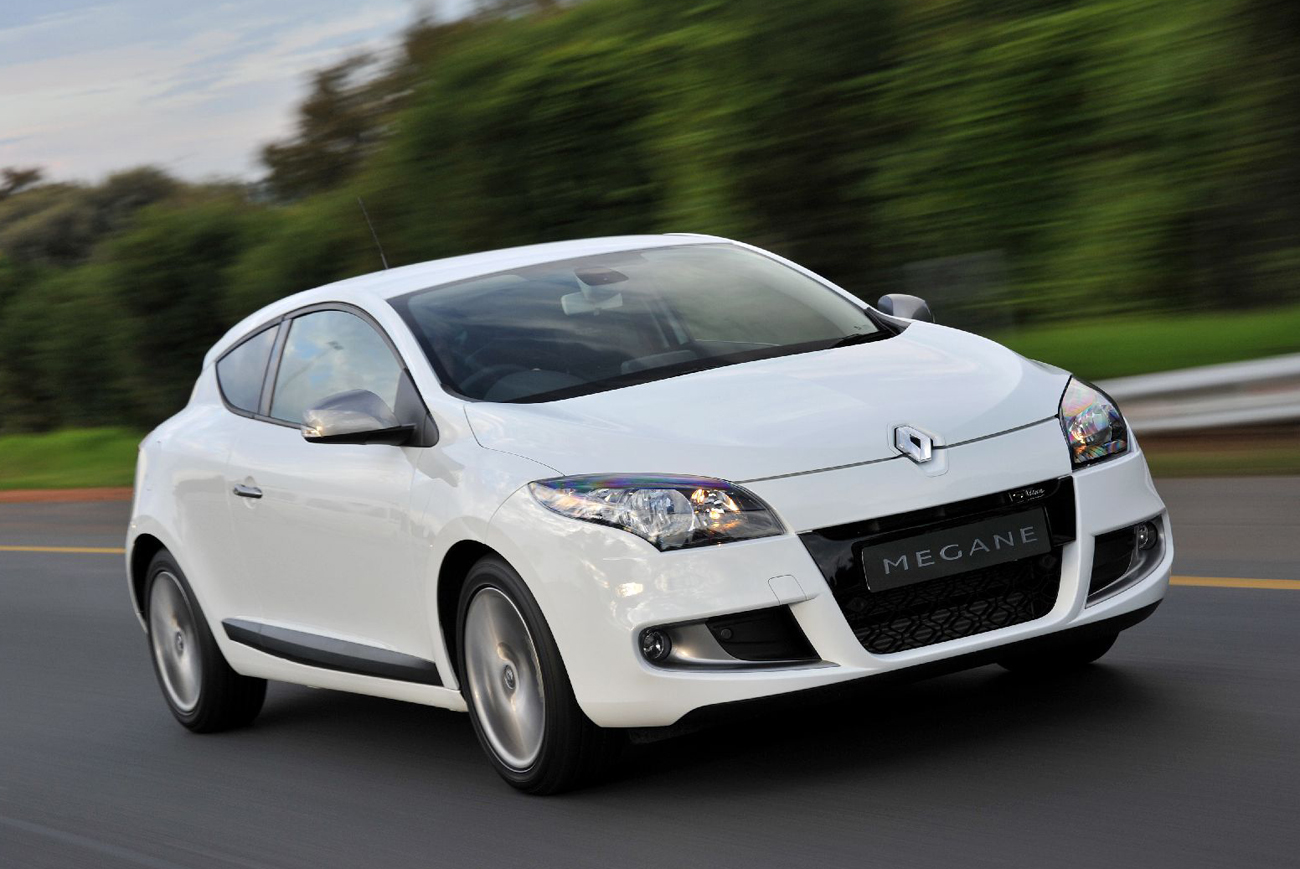 New car buyers are spoilt for choice when it comes to C-segment hatchbacks, with brands like Volkswagen, Ford, Mazda, Hyundai, Opel and Kia all vying for their attention. Renault’s Mégane also belongs to that clan, but doesn’t always enjoy the profile it deserves. GT Line is a mainly cosmetic package designed to focus attention on Mégane, and also on its turbo engine. By DEON SCHOEMAN.

It may carry a GT Line badge, but the shape and silhouette of the newcomer are still mainstream Mégane. In fact, we’re talking two cars here: The Mégane five-door hatch, and its sexier, three-door coupé sibling. Both can be ordered in GT Line guise.

They also share a sleek profile and smooth surfaces that emphasise aerodynamic appeal, but while the hatchback’s styling could be accused of being too generic, the coupé’s more aggressive appearance certainly sets it apart from the norm.

Still, even in the case of the hatch, the clean and contemporary design approach grows on you – the more you look at it, the more you like it. That low stance, the wide tracks and short overhangs all boost the Mégane GT Line’s sporting appeal. And let’s not forget that the hatch also offers some practical virtues. So, what does the GT Line package comprise? Firstly, it’s only offered in concert with Renault’s 1.4 TCE engine, combined with the top-end Dynamique specification level, ensuring an appealing platform for the rest of the GT Line goodies.

Next, there’s a subtle, colour-coded body kit with a new front bumper and a larger air intake, which adds some distinction and visual aggression to the frontal appearance. Those with an eye for detail will also notice the darker headlamp surrounds and the anthracite mirror housings. At the rear, there’s also a new bumper, this one sporting an integrated diffuser. The sills are lower, and those multi-spoke 17-inch alloy wheels are new, too. The overall look is fresh and sporty, but not as macho as the full-blown RS versions.

Talking of which, the GT line Méganes don’t share the RS version’s extreme mechanicals, although the hatchback does get a lower, tauter suspension, which delivers a more direct, more responsive driving experience. The coupé already rides on that suspension in line with its sportier positioning.

The rest of the underpinnings are pure Mégane, which means the GT Line relies on a MacPherson strut-based front suspension and a so-called flexible beam rear axle – Renault’s take on the traditional torsion beam configuration.

The cabin also gets the GT Line treatment. Most prominent are the heavily bolstered sports seats, borrowed  from the RS Sport. Those bulky sport seats steal some rear legroom, but the cabin is still airy and spacious – and besides, the seats are both supportive and extremely comfortable.

Instrumentation reverts to analogue dials instead of the standard Mégane’s digital versions. Included is a white-faced rev counter with a red needle. The GT Line interior also boasts aluminium pedals, dark brushed metal finishes and GT Line logos on the sills and headrests. Star of the show is the latest Carminat TomTom satnav system, which incorporates TomTom Live – a real-time traffic information and rerouting system. Renault SA is the first to offer this as an integrated component locally, and TomTom is expected to switch on its Live system early in June.

As we have come to expect of Renault, safety is comprehensively addressed too, in line with its Euro NCAP five-star rating, which means it has all-disc ABS brakes with EBD and EBA, as well ESP stability control, and front, side and curtain airbags.

As mentioned, the GT Line Méganes are only offered with one engine – a 1,4-litre TCE unit, which combines a small capacity with a turbocharger to achieve both good performance and frugal fuel efficiency.

Maximum power is a claimed 96kW at 5,500rpm, linked to a 190Nm torque peak, much of which is on song from around 2,000rpm. The result is an engine that pulls with the verve of a much larger unit. Midrange urge is particularly satisfying, as is the almost total absence of turbo lag. In fact, many people many not even realise that they are driving a turbo-engined car.

Renault says the powerplant has the muscle of an 1,800cc unit, the torque of a two-litre engine, and the fuel consumption of a 1,600cc mill. That seems to be borne out by the stats, which suggest a combined-cycle consumption of 6,6litres/100km, with a CO2 emissions rating of just 145g/km. Of course, if you drive the Mégane GT Line with gusto (and frankly, this car enjoys being exercised with some enthusiasm), those consumption stats are likely to be somewhat higher. On an extended drive along the Garden Route, we burnt premium unleaded at the rate of about 8litres/100km.

That’s not surprising, given the car’s sporty personality, and the fact that it goes pretty well too. That good midrange is augmented by a slick-shifting six-speed gearbox that adds to the car’s overall driving appeal, while straight-line performance is swift, if not lightning-fast.

In fact, the Mégane always feels brisker than the 9,6 sec acceleration time from zero to 100km/h suggests, while the 200km/h is largely irrelevant. More important is that there always seems to be enough zip to pass slower traffic, while the overall tractability is satisfying, especially in the context of the small engine.

The lower, stiffer chassis makes a big difference to the hatchback’s road manners. The car feels more settled and more composed when pressing on through a set of twisties, as a blast through the old Van Staden’s Pass outside Port Elizabeth proved.

The sharper, sportier steering adds to the driving fun, even if it could do with better feel. That said, the GT Line is certainly more involving than the standard model. There’s still enough damping to provide a decent ride, but the Mégane hatch feels more poised and precise than before. In fact, the chassis feels so good it almost cries for a bit more power.

The dynamic differences are less marked in the GT Line coupé, since the standard version is already equipped with the lower, tauter suspension. But the driving experience still benefits from the addition of those form-hugging sport seats, especially in the cut-and-thrust of a mountain pass.

While the latest-generation Renault Mégane is somewhat underrated in a cluttered hatchback segment, the GT Line package should help to change that. The hatchback version, and especially the coupé, look good, but drive even better.

These are not tar-burners batting in the same league as the Mégane RS, the Golf GTI or the Ford Focus ST. But they are swift, sporty and sexy. In other words, the GT Line adds welcome visual and dynamic sparkle to an  already excellent package.