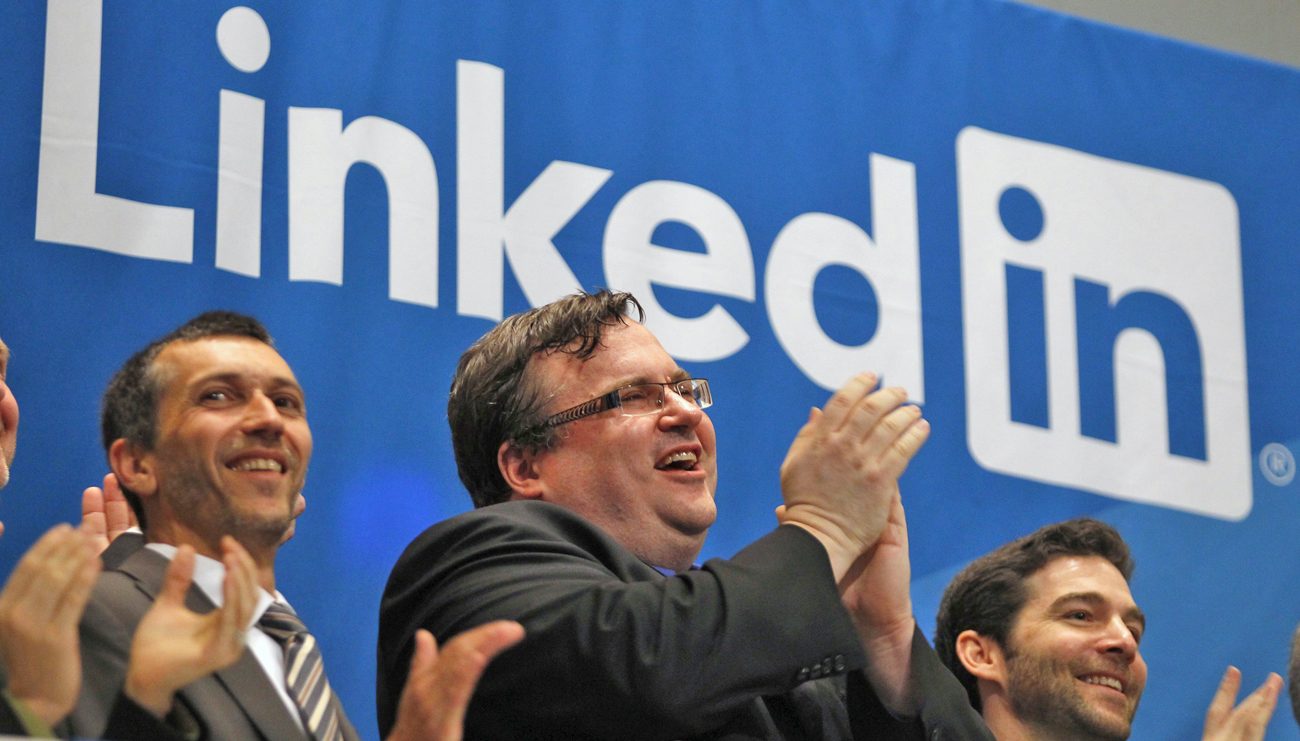 LinkedIn's founder and CEO applaud from the bell balcony of the New York Stock Exchange during its IPO. (Photo: Reuters / Alamy Stock Photo)

If the world of social networking were a mullet haircut, LinkedIn would be the “business in the front” and Facebook would be the “party at the back”. Debuting last week on the New York Stock Exchange, many pundits will be expecting the performance of LinkedIn to confirm the manifestation of yet another financial markets bubble. Another Daily Maverick analysis with lots of numbers by STYLI CHARALAMBOUS.

Plotting the progress of the LinkedIn and its founding partners is like taking a walk through the Tech Hall of Fame. Founded in December 2002 and launched in May 2003, LinkedIn is yet another brainchild of one of the original PayPal mafia members Reid Hofman.

LinkedIn co-founder, Hoffman, was a central architect of the success of PayPal, and used his substantial payout from the $1.5 billion acquisition by eBay in October 2002 to subsequently participate in more than 80 tech investments and start-ups. His prowess and nose for a good-thing (and a cheeseburger by the looks of recent photos) has earned him the reputation of being one of the most successful angel investors of the last decade. No mean feat, considering the posse Hoffman rides with and the pedigree of the rest of the Silicon Valley illuminati.

It was Hoffman who introduced the legend-in-the-making, Peter Thiel, (another PayPal mafioso) to Mark Zuckerberg, late in 2004. Having both participated in first round funding of Facebook, Thiel’s initial investment of $500,000 is now worth approximately $10 billion. So it comes as no great shock to learn that LinkedIn too is following a well-moneyed path to success that so many of the ventures of the PayPal alumni have achieved.

LinkedIn now claims more than 100 million registered users, accessing the site in at least 200 countries and is translated into six other languages. Growing at the rate of one new user a second, or 86,460 a day, it is easy to see the value of having so many business-orientated visitors accessible in one place.

And what exactly can you achieve by being a member of LinkedIn? Having registered in 2004, I can’t remember doing much more than writing a basic CV of pay cheques I’ve collected and connecting with people with whom I’ve worked, studied or shared a copious amount of booze with.

There are a number of benefits to being LinkedIn, for both individuals and businesses. The more one is connected, the more likely you or your business are to appear in on-site search results as well as Google rankings. People are also more likely to do business with those who are well-connected or have even been recommended by others, a nice feature introduced in 2010. For corporations and premium subscribers, advanced tools allow detailed searches of people’s work and industry experience, an incredibly powerful tool for potential recruiters. Bloggers and tweeters can link into LinkedIn, thereby giving their poetic prose additional airtime. And for those that need the knowledge of the crowd, LinkedIn answers allow users to post forum-style questions, mostly pertaining to business and career issues.

But is LinkedIn really worth the $9 billion opening day valuation the New York Stock Exchange would have us believe?

As a rudimentary method of valuation, we recently justified the potential $100 billion valuation of Facebook. With a user base 17% the size of Facebook and catering to the lucrative business market, $9 Billion suddenly doesn’t seem too ridiculous.  Although with revenues only about 10% of Facebook, LinkedIn certainly has yet to be ordained in the ad revenue playground where Google is King and Facebook the Crown Prince and Heir to the Throne.

But as with the haircut, there are significant differences between the business in the front and the party in the back.

It’s doubtful that any of these facts permeated the research and thinking of gamblers, a.k.a. investors that drove the IPO price of $45 a LinkedIn share to $122 within days of listing. It’s feeding frenzies like these that have Judgement Day believers pointing to the Bible’s (year 2000 edition) predictions, in the book of Tech Revelations, that history shall again repeat itself and we shall, once again, be called to account for our tech investment sins.

Even as the outrage surrounding the underpriced offering of shares to institutional shareholders propagated, the listing exercise itself was more a marketing event than a strictly financial one. With less than 5% of the ordinary shares made available for listing, the ensuing media coverage far exceeded the potential shortfall of capital that could have been raised with a higher IPO price. Publications around the world covered the insanely successful opening day “pop” of the LinkedIn share price as it rose faster than an editor’s blood  pressure on receiving the next Ivo Vegter column. Raising cash it didn’t need was, therefore, not the primary objective of the listing.

So when the question of the valuation of LinkedIn again rears its potentially ugly head, we should always remember one fundamental aspect of business valuations: Absolutely nobody is right. Nobody can be right because valuations are the present value of future cash flows. At best, our guestimates based on past profits and expectations of future profits will hopefully get us somewhere in the damn ballpark. But nobody knows if LinkedIn can or will achieve its expected future profits to justify its current valuation. Sometimes this business can be more about sales than pure finance theory – financial alchemists at investment banks telling investors what they want to hear.

But if one of the sickle-waving naysayers of social network valuations just happens to be Warren “Yoda” Buffet, who told buyers to beware in March 2011, maybe it’s time we sat up and heeded the Sage of Omaha’s advice. DM