As Judgment Day fails to dawn, it's no time for cheap s...

As Judgment Day fails to dawn, it’s no time for cheap shots 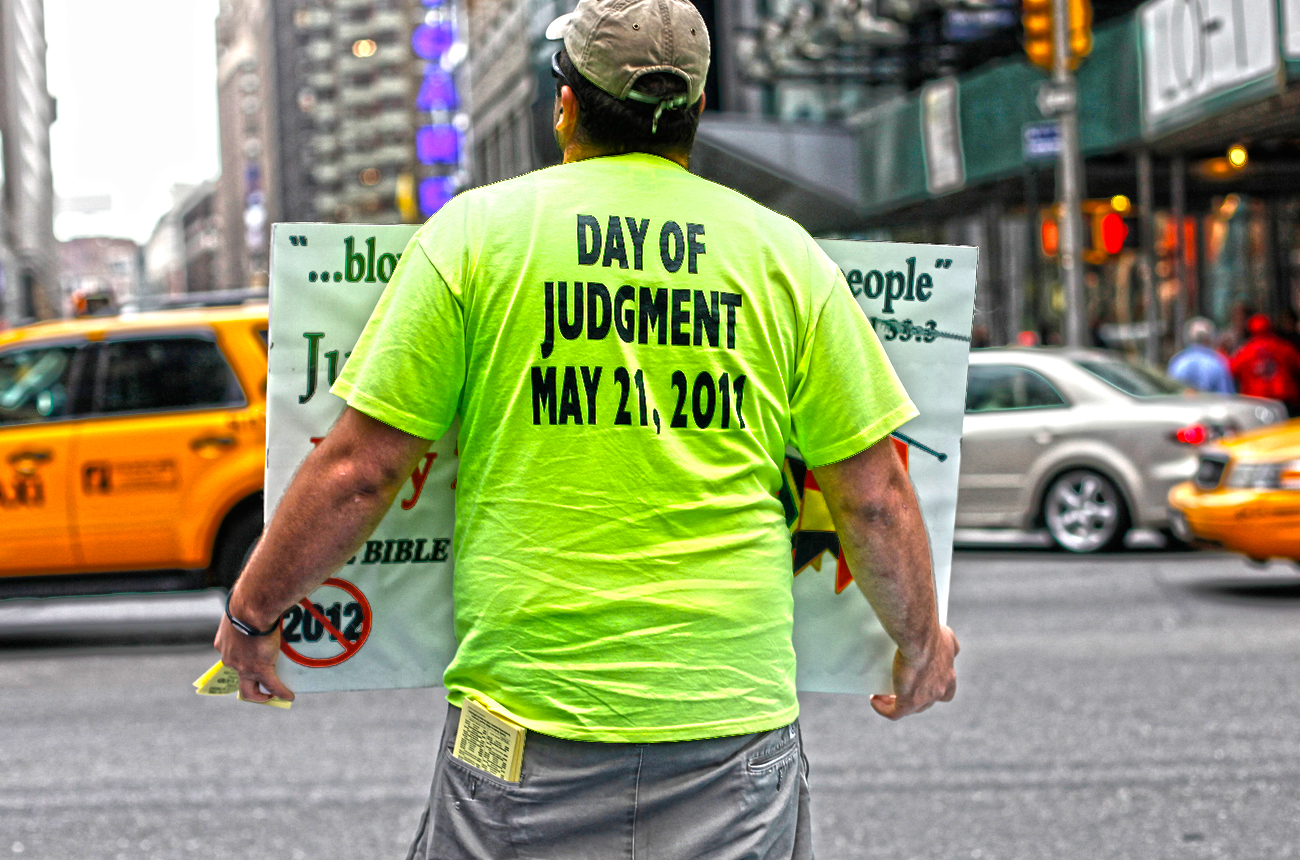 In the face of a false Judgment Day prophecy, easily the most widely-believed prophecy of its type for more than a century, thousands of people are waking up today with the feeling that the world has indeed ended – except in a figurative sense, and not the literal one they’d hoped. These would be the same people who agreed with Harold Camping’s prediction for May 21, and on May 22 they probably need our sympathy a little more than our ridicule. By KEVIN BLOOM.

It’s almost too easy, as May 21 draws to a close across the planet, to come up with sarcastic statements and headlines about Harold Camping and his followers. In the months and weeks leading up to the day that the California-based octogenarian calculated as the End of the World, countless media outlets have poked fun at this strange and earnest group of millenarians. The Daily Maverick, which has now written seven pieces about the group, has been no exception – our initial piece, published in early January 2010, was headlined “Only 501 shopping days to Armageddon,” and the ensuing five (excluding this, our last and hopefully final on the subject) were mostly ironic in tone. But with tens of thousands of people waking up today to the knowledge that they’ve been horribly misguided – and in some cases far, far worse – the time for cheap shots has passed.

Take the following story from the New York Times, which ran late last week. The piece is about families in America who’ve been split over the question of Camping’s prophecies, and one of the families it focuses on is the Haddad Carsons, from Middletown, Maryland. The picture accompanying the article shows them on the surface to be normal and happy – the parents still married, the three teenage children smiling and healthy. Where this family differs, however, is that while the parents believed that Camping was right about May 21 being God’s pre-ordained Judgment Day, the children did not. “My mom has told me directly that I’m not going to get into heaven,” Grace Haddad, 16, told the newspaper. “At first it was really upsetting, but it’s what she honestly believes.”

With the sun now rising on May 22 in Middletown, and no enormous earthquakes having ripped the planet to shreds in the previous 24 hours, what conversations are about to happen over breakfast in the Haddad Carson home? Can a daughter forgive a mother for telling her to her face that she was damned to everlasting hellfire? Will that same mother be able to reapply for her nursing job, which she resigned to “sound the trumpet” on mission trips with her husband? What about the fact that these parents had stopped saving for their children’s college education? Will they be able to acknowledge their mistake and resume their lives as if nothing had happened?

The same questions must be asked of the many believers that The Daily Maverick met in Johannesburg last August, when a delegation took over the Orion Hotel Devonshire in Braamfontein to spread the word. Our thoughts turn to Phillip Basi of Richmond in KwaZulu-Natal, who gave up his vocation as a pastor to follow the “truth” of Camping, and to Johannes Coetzee of Nelspruit, who’s been a consistent and cheerful source of quotes and information for this website (we thought it in bad taste, not to mention monumentally insensitive, to call Coetzee for a final quote this morning). How will Basi and Coetzee, by all accounts gentle and agreeable people, handle the fact that their life’s calling has turned out to be a ruse?

Less worthy of sympathy is Camping himself. What’s he up to today? As reported previously, Camping had got his prophecies for Judgment Day wrong once before – his first date was September 6, 1994 – but he convinced himself and thousands of others that it was a simple matter of incorrect calculations; the absolutely correct date, he pronounced in over 60 languages on media platforms across the world, was May 21, 2011. On May 22, 2011, according to news reports, the 89-year-old is yet to explain the reason for his second mistake.

Whether Camping can and will be indicted on criminal charges is an interesting issue. In some senses, with many acolytes having poured their life’s savings into funding the international billboard blitz (Family Radio, the benign name of this Christian evangelical group, has been advertising on five continents since 2009), the charismatic leader is not much different to swindlers of the ilk of Bernie Madoff. The key difference, of course, is that on the balance of evidence Camping didn’t do any of it for self-enrichment; he believed in his End of Days prediction more than anyone, and to prove it he poured hundreds of thousands of dollars of his own funds into the media campaigns. Still, there’s something about this that’s more serious than even financial insolvency – and that’s the potential for loss of life.

The Internet is today full of reports of US-wide suicide watches, and apparently at least one believer has already taken his life. As the days and weeks post-May 21 progress, there’s every reason to assume that more of Camping’s followers will feel desperate enough to perform this ultimate act. Meanwhile, the website ebiblefellowship.com (an official mouthpiece of the organisation) is currently claiming that it’s “still May 21 in parts of the world.” Clearly – and tragically – these beliefs are going to die hard. DM

Photo: A volunteer from the U.S. religious group Family Radio, a Christian radio network, holds a sign with warnings of an impending Judgment Day at Times Square in New York May 13, 2011. The designation of May 21came from Family Radio president Harold Camping, who predicted that date through a series of mathematical calculations and the unraveling of codes behind the Bible story of the great flood. REUTERS/Shannon Stapleton.