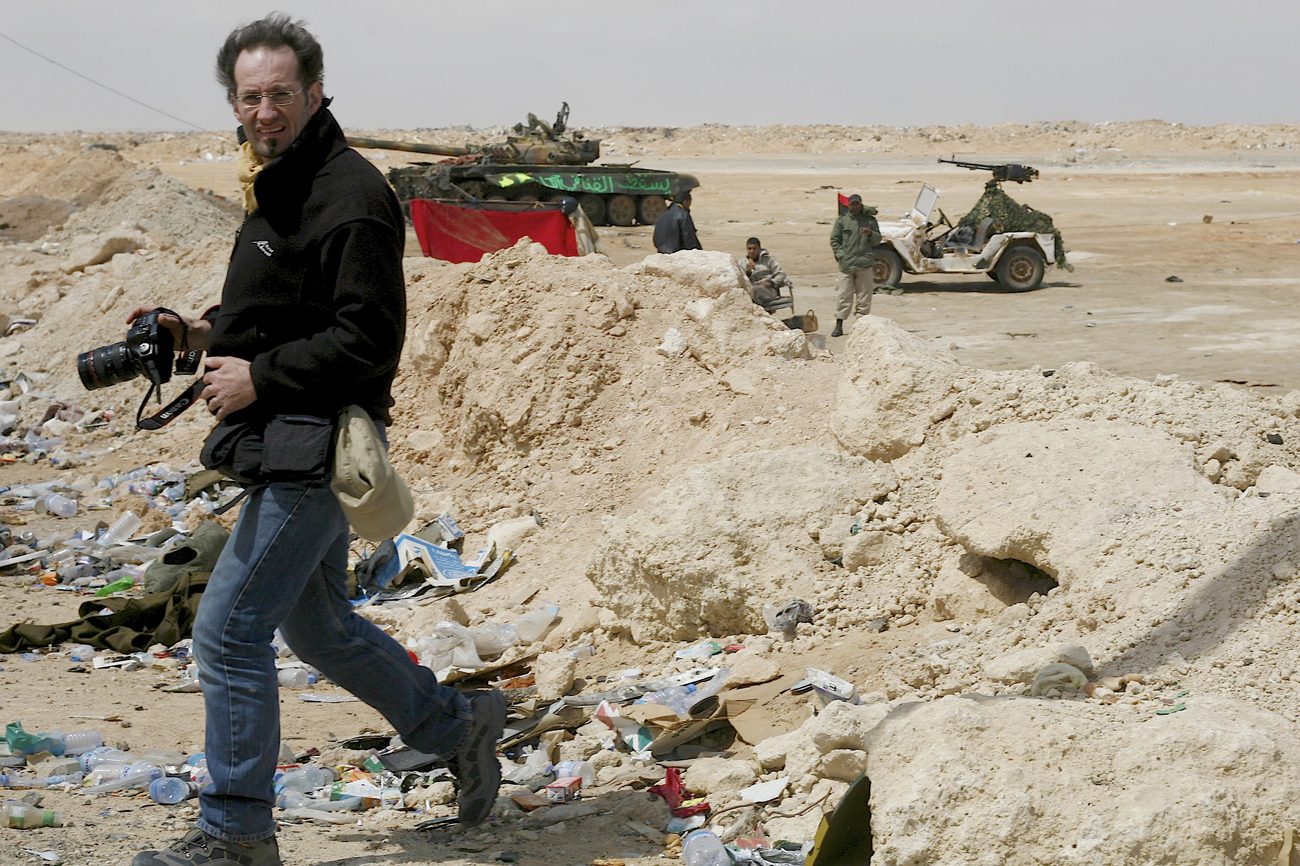 On Thursday night South African photojournalist Anton Hammerl's wife, Penny Sukhraj, received the phone call she'd been dreading. Her husband had been shot dead by Gaddafi loyalists on 5 April. The South African government – which had assured all and sundry that Hammerl was alive – now say they were consistently lied to by the Libyan government "from the highest levels". What action can it take to express outrage about those lies? Not a great deal, it seems.  By THERESA MALLINSON and PHILLIP DE WET.

Anton Hammerl was never in the custody of the Libyan government, at least not while alive. Instead, on 5 April, a group of journalists came under fire near Brega. Americans Jim Foley and Clare Gillis as well as Spaniard Manu Brabo, were indeed captured and held by the Libyan government until their release on Wednesday. Hammerl, though, was shot in the stomach, and almost certainly died shortly thereafter. For more than a month, though, the Libyans told another story.

That was what emerged late on Thursday night, once Foley and Gillis were free to speak. Until that point, we are told, they could not convey the news of Hammerl’s death to the intermediary that made contact with them for fear of their own safety. Once safely in Tunisia, though, they provided all the graphic detail of an encounter in which, it seems, they may have come under fire specifically because they were journalists. The four journalists had been travelling together to a rebel camp and, as they approached the front line, they climbed out of their car, while the rebels they had been accompanying went on ahead. But, when they were fired upon by Gaddafi’s forces, the rebels beat a quick retreat, leaving the journalists to fend for themselves.

The journalists, who initially assumed they were caught in crossfire, soon realised they were being shot at and dived to the ground. However, the soldiers continued shooting. “Are you okay?” Foley shouted to Hammerl, who was closest to the shooting. “No,” Hammerl replied. That was his last utterance; he had been shot in the stomach and there was no chance he could have survived without immediate and sophisticated medical help. None was available.

“We knew collectively that if we spoke about Hammerl’s death while we were detained, we would be in greater danger ourselves. But now that we’re free, it’s our moral imperative to tell the story of this great journalist and father,” James Foley told the Global Post.

Not so understandable, however, is the Libyan government’s bald-faced lies regarding Hammerl’s whereabouts, and the South African government’s easy acceptance of those lies. On Friday morning international relations minister Maite Nkoana-Mashabane said South Africa had done everything possible to secure Hammerl’s release, having received “reassurances at the most highest[sic] levels of the Libyan authority that Anton was alive”.

His family received the same treatment. “From the moment Anton disappeared in Libya we have lived in hope as the Libyan officials assured us they had Anton,” the Hammerl family said in a statement. “It is intolerably cruel that Gaddafi loyalists have known Anton’s fate all along and chose to cover it up.”

Nkoana-Mashabane’s earlier statement that the South African government had proof of Hammerl’s whereabouts was, of course, equally false. It would seem that “proof” consisted of nothing but insincere statements from a government with which South Africa has a frosty relationship, to put it mildly.

On Friday both the government and the SA National Editors’ Forum focussed on support for Hammerl’s family, and said efforts would be made to find and repatriate his body, so that he could receive a decent funeral. There were no answers to be had on how South Africa will express its displeasure with Libya for playing its games though.

Will SA expel the Libyan ambassador in Pretoria? There is no ambassador in Pretoria, Nkoana-Mashabane said. The incumbent has defected to the rebels headquartered in Benghazi and is no longer recognised by the government in Tripoli. Can other action be taken? Well, the minister said, we voted on the United Nations Security Council for intervention against the Gaddafi regime, so there really isn’t a great deal more to be done.

What she proposes instead is to “continue to seek and demand the truth”, which is a somewhat stronger statement than it may seem. Identifying the individuals responsible for Hammerl’s death could see them, and perhaps their commanders up the line, held criminally responsible. It is a remote possibility, and would take years, but a quest for justice must start with the truth about what happened.

The incident has done nothing to restore the faith of many South Africans in the ability of the government to deal effectively with difficult situations. The death of Anton Hammerl and SA’s inability to even express righteous anger about it, gives a face to the quiet-diplomacy approach that has been seen in reacting to everything from Zimbabwe’s Mugabe infestation to the uprisings in the Middle East. In a world where citizens are increasingly demanding cutting honesty and direct action, South African diplomats continue to talk softly and carry no stick at all. Doing otherwise could not have prevented Hammerl’s death, but it could have shortened the needless suffering of his family considerably. DM