The Godfather of mercenaries arms the UAE, wants South...

The Godfather of mercenaries arms the UAE, wants South Africans 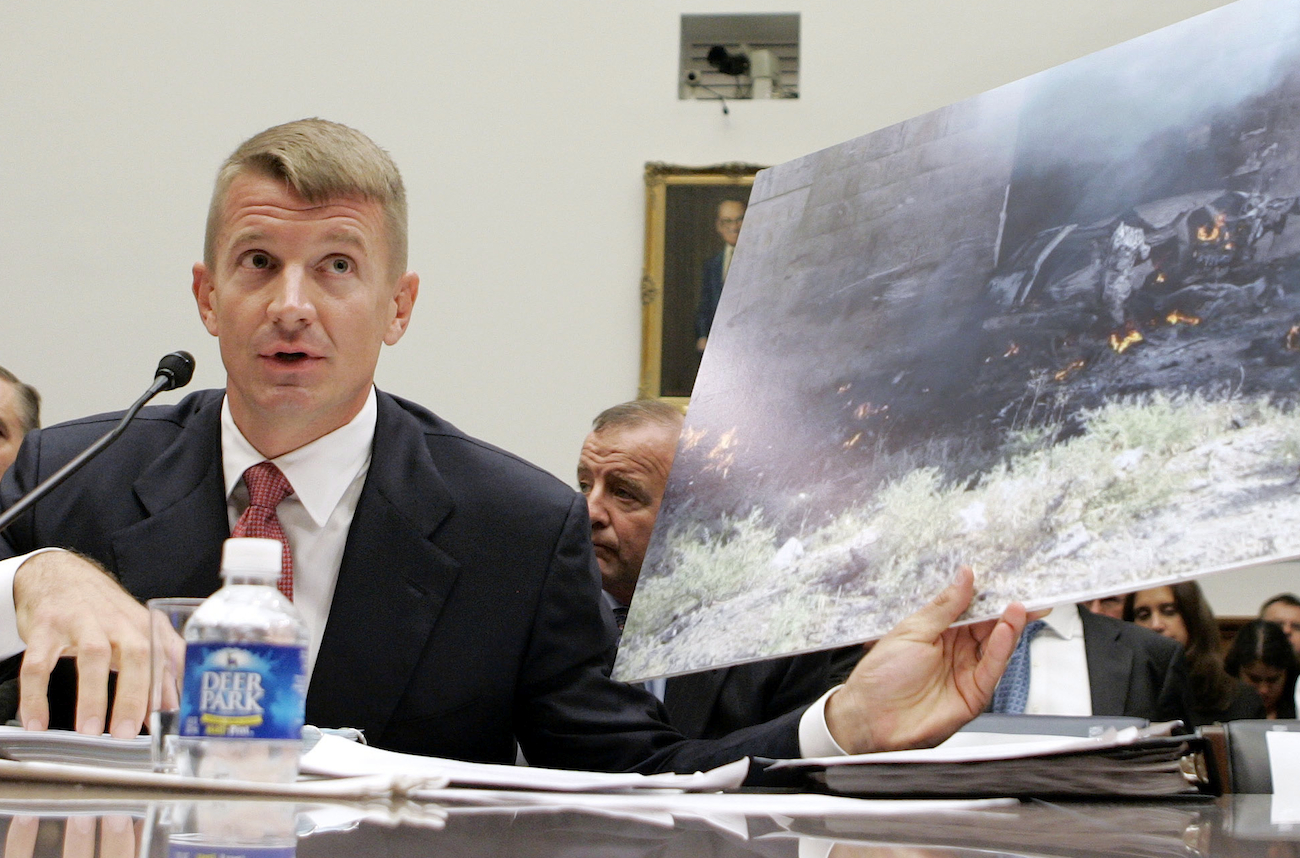 Erik Prince, the 41-year-old former Navy Seal billionaire who years ago created the controversial private security firm Blackwater Worldwide, has started a new venture in the desert outside Abu Dhabi. With millions in cash from the emirates, Prince is building an army for the oil-soaked sheikhs. In the process, he’s hiring South Africans who know their way around a dirty war. By RICHARD POPLAK.

When Erik Prince leaves this earthly realm, Hell is going to have to pull out all the stops. Where, precisely, does one eternally house a man who built a private army that has shot unarmed civilians, fled prosecution in several war-torn countries and generally behaved like the planet is one big free-for-all? The saddest thing about Prince, though, is not that he’s a really, really bad guy. It’s that he so perfectly fits the post 9/11 zeitgeist, the us-vs-them, win-at-any-cost mentality prosecuted so enthusiastically by the Bush administration.

“We are trying to do for the military service what Fed Ex once did for the postal service,” Prince said when founding Blackwater (since renamed Xe Services LLC) in North Carolina, in 1997. His ice-cold pragmatism—let’s call it Cheney-ism—is exactly what made Iraq, after the invasion, one of the darkest moments in American history.

The men and women who hired Prince and his Blackwater mercenaries to guard pipelines, man outposts and shoot children in the wilds of Afghanistan and Iraq—all to keep up the Rumsfeldian fiction that “only” so-and-so number of troops were needed to engineer regime change in these restive lands—have now turned on their janissaries. In 2004 four Blackwater contractors were gruesomely slain and hung from bridges in Fallujah, which prompted the battles in that city, twin gong shows that will one day be regarded as critical in America’s downward imperial trajectory. The moment that proved Blackwater’s tipping point, however, was the shooting of 17 citizens of Baghdad in September 2007, while the company’s guards were escorting US state department officials to a meeting. Blackwater’s license to operate in Iraq was revoked. The name was changed to the inscrutable Xe Services, and a dark star was placed alongside Erik Prince’s name on the CIA’s list of dodgy no-bid contractors.

Prince has proved beyond a shadow of doubt what should have been perfectly obvious in the first place: Fed Ex and the contracting out of military services have slightly different moral implications. And very different outcomes. That’s not to say the process has stopped. Far from it. Indeed, mercenary armies are as old as the art of war. And in the deserts of the United Arab Emirates, where paranoid oil sheikhs stare out into the Persian Gulf and see an encroaching, metastasizing Iranian menace, Erik Prince has come to embody a solution. His new employers are not squeamish. They do not have to answer to their polity. They want a blue chip army to go with their new Louvre museum and their flagship Louis Vuitton megastore, and they want it now.

So, on a sweltering night last November, tens of Colombian soldiers set down in a new facility built nearby the oilopolis of Abu Dhabi, juiced by $529 million in funding. The barracks keeps prying eyes out and the soldiers in. They train, entirely sheltered from the rest of the population, and have a very specific mandate: Answer only to Sheikh Mohammed bin Zayed al-Nahyan, owner—sorry!—crown prince of the UAE. The al-Nahyans are, of course, terrified of Iran, and not necessarily in the conventional sense of the term. Iranian proxies like Hamas and Hezbollah have proved remarkably resilient in other parts of the Middle East. Hezbollah is by any measure the most successful proxy army in the region, having been painstakingly built by Iranian support over the course of the past three decades. The sheikhs are nervous of the destabilising threat posed by Iranian (read: Shiite) interests in the emirates.

They are no less afraid of the tens of thousands of Pakistanis, Bangladeshis and others being radicalised in the cheap labour camps that have powered the region’s growth for so long. When push comes to shove, the al-Nahyan will need a private force to fire upon those skinny, underfed men and put down any nascent rebellions that flare up. (The rancid fruits of economic exploitation and ideological differences have overthrown a couple of regimes of late, have they not?) The al-Nahyans aren’t looking for a repeat performance. Only about 10% of the emirates’ population is indigenous – almost all the labour in the region, skilled and unskilled, is performed by foreigners. That is a brewing desert dust storm the sheikhs are looking to quell.

Prince’s “new model army” will eventually be 800 strong, has a strict “no Muslim” hiring policy, and is meant as a stopgap for a conventional military viewed as woefully inadequate. Unsurprisingly, a breakdown of nationalities is not publicly advertised, but it is thought many of Prince’s troops are South African military veterans, which doesn’t bode well for the emirates enemies, whoever they turn out to be. Our local mercenary class is notoriously trigger-happy, and certainly not averse to a little shoot-up every now and again. We should be proud.

That said, this caper might not be strictly legal, at least from the US state department’s point of view. Last year, Xe Services paid more than $42 million in fines for training foreign troops in Jordan and elsewhere—such activity is “verboten” without a licence. No one is entirely sure whether this army has any tacit state department or CIA backing, but it stands to reason the US administration is only too happy to see the Emirati sheikhs shelling out for stability. Trouble-free oil is a dwindling commodity these days. Abu Dhabi drills some of the last of it.

Erik Prince, and his new company Reflex Responses, will see billions of dollars in contracts when all is said and done. The emirates will cough up more and more to ensure their pipelines and cyber-networks are secure, and Prince’s own expanding desert empire will be there in the breach. Which suggests an intriguing possibility: Prince could one day turn on his employers, shoot up their palaces, and stand astride their glittering towers as lord of all he surveys. And a South African mercenary with a pencil moustache could run the Emirati justice ministry, conjuring up memories of a regime we assumed was long dead. Stranger things have happened. One hopes, for the al-Nayhan’s sake, they have a good contract in place, and a new New Model Army to counter their New Model Army. Erik Prince might turn out to be their most dangerous high-end acquisition. DM

Photo: Blackwater Chief Executive Erik Prince holds a photograph of the remains of a blown up vehicle in Iraq while testifying before the House Oversight and Government Reform Committee on security contracting in Iraq and Afghanistan on Capitol Hill in Washington, October 2, 2007. Blackwater, under investigation over deadly incidents in Iraq, defended its role, but lawmakers took aim at the company’s actions in a shooting in which 11 Iraqis were killed. REUTERS/Larry Downing