His Master's Voice and the perennial question of SABC b...

His Master’s Voice and the perennial question of SABC bias 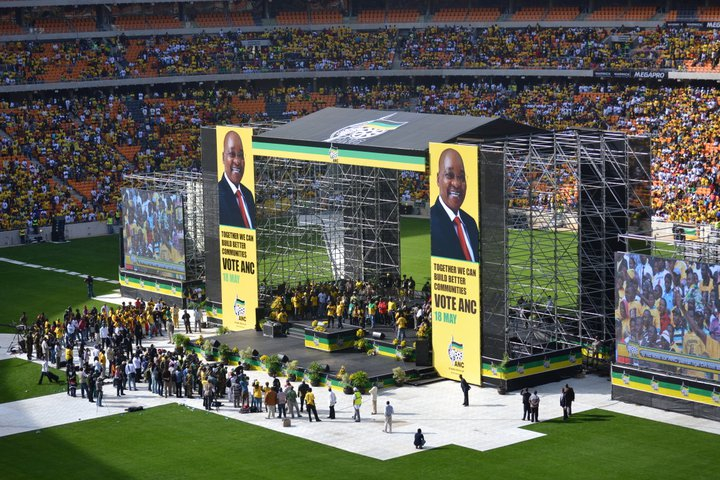 The DA’s at the SABC’s throat, citing bias after the public broadcaster gave the ruling party live coverage for the ANC’s final Siyanqoba rally on Sunday, days before voters go to the polls. The SABC, of course, says the DA’s talking nonsense. The law says electoral coverage should be equitable, but is vague enough to make deciding what is equitable fairly malleable. And yes, we’ve heard this all before. By MANDY DE WAAL

What would an election be without political parties bemoaning unfair treatment by the media? Predictably the ANC is wailing about the press with Gwede Mantashe saying that the ANC has had to “swim against the media” and that newspapers in particular have been obstructive by presenting analysis as fact.

In turn the DA lashed out at the SABC which gave prime coverage to the ANC’s final rally just before voters were due to go to the polls. The DA’s James Selfe said the opposition party was consulting lawyers on what action to take, but noted the horse had pretty much bolted the stable.

“It is a complicated matter because the Independent Broadcasting Authority Act specifically uses the word ‘equitable’, but the devil is in the details when it comes to deciding what is equitable and what’s not. However, to broadcast the final rally of one party live and deny the major opposition party that same right goes to the very content of what is equitable. The problem with the SABC’s position on this is that editorial values and news worth is what you make of them, but the matter of newsworthiness doesn’t come into the Independent Broadcasting Authority Act,” says Selfe.

He’s right when he says the law guiding public broadcasts deals with the concept of being equitable, but he’s incorrect in citing the Independent Broadcasting Authority Act. That law was repealed many years ago and the law that now governs all things equitable and matters electoral in public broadcasting is the Electronic Communications Act. ECA is policed by Icasa, which like the SABC has its own torrid history, fraught with management crises, questions about independence and concerns about the efficacy of the authority, particularly when it comes to policing laws.

Selfe’s key issue with the SABC broadcast of the ANC final rally is what it could do to swing votes. “Undecided voters make up their minds relatively late in a campaign so there is a huge advantage if one party has its rally broadcast live with unedited and unexpurgated treatment by a public broadcaster whose mandate is to act as an information conduit for the population of South Africa. This SABC then pre-records, edits and chooses what material it will use from the DA rally. This is not the first time we’ve been down this road.”

Indeed it is an old electioneering complaint, and the SABC’s spin doctor Kaizer Kganyago is more than practiced in his reply. The short version is the SABC believes the DA is speaking poppycock. The longer version? “The decision to broadcast the ANC rally live was an editorial decision,” says Kganyago. “Which news organisation would disregard a rally that brings together over a 100,000 people? Now, that is newsworthy.” An emboldened Kganyago goes further by interpreting the broadcast law according to his wont. “The argument that we are biased does not hold water because the DA got fair coverage from the SABC. We are not supposed to give each party equal treatment. The bigger the party, the more coverage they must get, which is why the ANC gets the coverage it does.”

He says the DA’s talk of the SABC breaking broadcasting law is nonsense. “If they think we have transgressed legislation they know what they have to do. They are just finding someone to blame. We are not here to pander to political parties, we are here to give the public information and in that process we must make editorial decisions and no-one has the right to argue with us about how and why we do this. We do live broadcasts all the time like soccer matches and the Sama awards and we don’t see any reason for having to specify why we do this.”

For Kganyago’s benefit, the Act says that when it comes to the coverage of political parties during an election the SABC “must afford reasonable opportunities for the discussion of con?icting views and must treat all political parties equitably”. What’s interesting is that the law stipulates a 48-hour cut-off time for party political broadcasts to ensure that no political broadcasts are made just prior to elections. It appears the ANC final rally squeaked in ahead of this deadline with mere hours to spare.

A more reliable interpretation of the law is afforded by media lawyer Okyerebea Ampofo-Anti who says the Act means the SABC is not permitted to favour one party above the other and must provide equitable news coverage in respect of the pre-election activities of political parties. “‘Equitable coverage’ does not necessarily mean ‘equal coverage’,” the Webber Wentzel associate says. “Given resource constraints, the SABC cannot be expected to cover every ANC event and every DA event.  The question of whether the DA was treated equitably will depend on issues such as the extent of coverage that was actually given to their rally.

“However, given the fact that the DA is the largest opposition party in the country, at first glance, the decision by the SABC to broadcast the ANC’s rally in full just a few days before the election, while refusing to give similar coverage to the DA’s rally could give rise to a perception of bias, which damages the image of the public broadcaster.”

What further damages the SABC’s already tarnished reputation is how the live coverage was aired. Daily Maverick’s Stephen Grootes reports Jacob Zuma was two hours and eighteen minutes late for the rally, but that this didn’t make the SABC cut away from the rally. Au contraire… they just kept on broadcasting.

“It is questionable whether the SABC should have given the rally quite so much time,” says William Bird of Media Monitoring Africa. “The problem is that smaller parties get very little coverage so voters get to know little if anything about who they are, what they stand for or what their policies are. This becomes a problem in that smaller parties become increasingly marginalised.

“With regards to the ANC rally one needs to ask whether the DA has cause to raise concern about the levels of coverage the ANC gets, and they may well have. The ANC has an unfair advantage because so much coverage is government-based and the ANC is the ruling party which means it already gets the lion’s share of coverage, which is a factor not only of the SABC but all media. However, with the SABC one would expect them to do a much better job given its mandate and resources. In the bigger scheme of things the DA has reason to be upset. One also needs to question the timing of the rally and its live broadcast. Further it is crucial to analyse the broadcast and to see whether there were political analysts present who offered context and questioned the ANC’s message. It’s critical that the SABC isn’t just a mouthpiece for the ANC, but builds in a critical distance for viewers whether they be ANC supporters or not.” DM