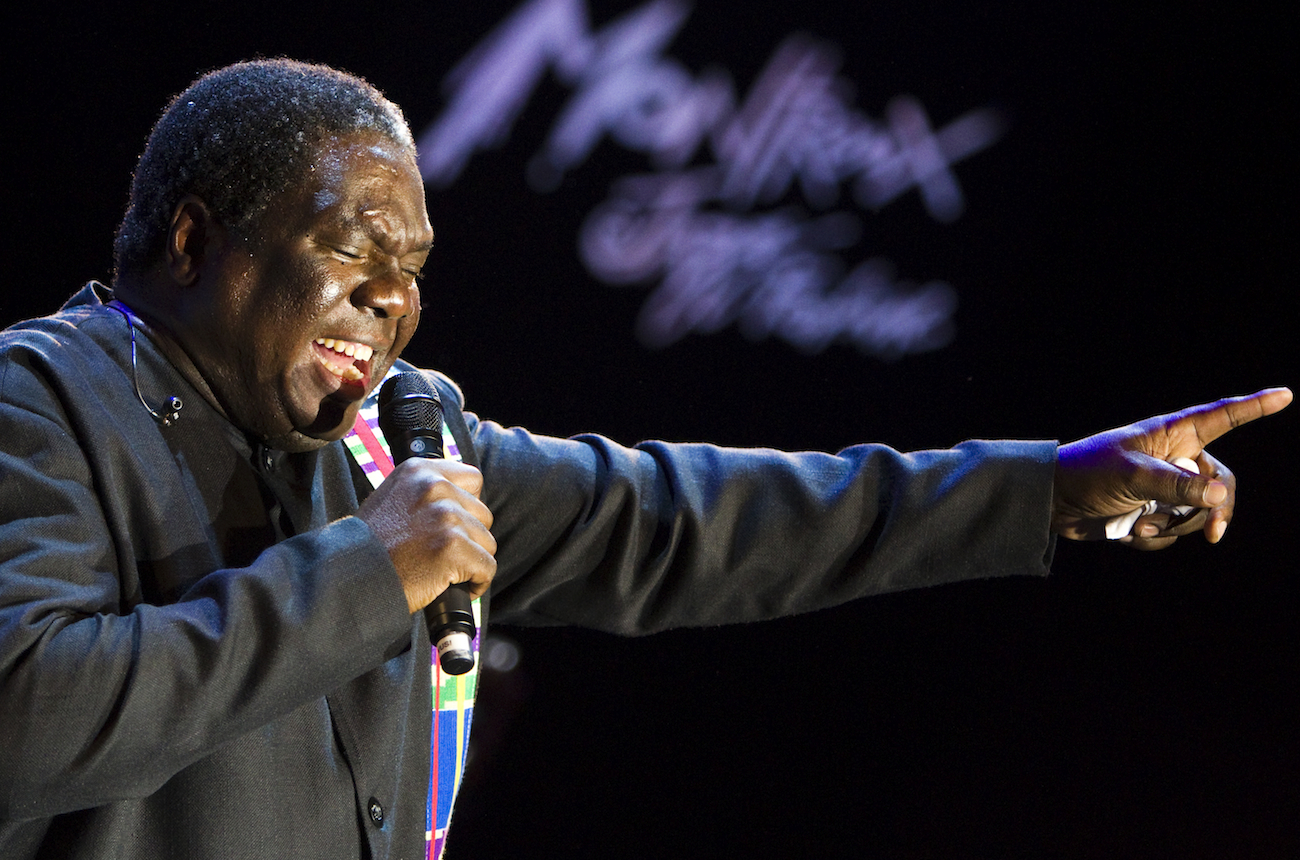 Many singers, famous and never-to-be-known, say their songs are “simple”. They call themselves “simple” people. Not simple in the pejorative sense, but simple in the moral sense of uncomplicated and heartfelt values and principles. These are the troubadours of our time, the travelling minstrels of collective memories. The Vusi Mahlaselas of modernity. By EMILY GAMBADE.

“Ubuntu is a great gift from Africa, it is about love, forgiveness, empathy and sympathy. It talks about redistribution of morals and knowledge. Without those things, without morality, knowledge and the sharing of it, what would we be? Where would our dignity lie?” These are the powerful words of  Vusi Mahlasela.  A night listening him is a night of music, stories and sharing. A night by the invisible fire, with the man who poetises about life, his guitar singing achingly poignant melodies.  “The Voice”, joyful and memorable, has returned, with two appearances at Market Theatre in Johannesburg on Thursday and Friday, with Brazilian musician Gilberto Gill. And he has just released his latest album, “Say Africa”.

Vusi Mahlasela is not just your everyday musician; he is a griot sans West African exclusivity, a voice telling stories of the past, a repository of the struggle, while his fingers are strumming the guitar. His optimism and never-ceasing humour carries the memories of a time where oppression of black South Africans brought killings, marches, fights and many funerals. Hope, too.

Born and raised in Mamelodi, where he still resides, the Vusi taught himself music on a guitar made out of cooking-oil cans. Not really because he was an entrepreneur, but because he was a poet with strength and love firing his heart and his voice.

Watch: Vusi Mahlasela – Say Africa (Live & Unplugged on KEXP). Do yourself a favor, watch it.

“Through songs and music, we can highlight the struggle, parts of our history, where we are coming from… It is just about giving some kind of enlightenment to the people. During the time of the struggle, we were given music so that we should not despair. I would not say that I’m carrying a flag, you know, because there were many who were doing this before me, in the light of Miriam Makeba, Hugh Masekela, and not only in music, in writing, in theatre. Those who have been carrying the torch, addressing the problems that were affecting South Africa.”

Yet, his voice shines a torch on yesterday’s and today’s issues, looking at South  Africa with a scrutinising eye.

“Music is life. It is important, in music, to address certain fears. Whatever it is that is, really, dearly important to us, as people. And today, well, this is a problem for me, under the post-apartheid South Africa, that question is: Okay, what do you write about now? But it is still relevant right now. (Looking at the people) we have voted for, and (considering) myself as a cultural worker, I have to be there like a watchdog and pinch those who are not doing the right things. And then I have to say, through my music, no, this is not right. Especially when it comes to talk about love. Politicians think that love is not really… Not for them, only for religious people. But if (political) parties can understand that love is… that’s why we are here; with love things can really get more positive. It’s a shame politicians are not using the simple concept of love, you know, it’s quite disturbing.

“And I think through my music, that’s what I’m trying to say, that it is really important to love one another. And we need to honour each other, as people, and this comes down to the concept of Ubuntu. Every day carries quite lot of things that are included in Ubuntu. “When talking about knowledge, it also includes skills that need to be shared. When one talks about redistribution, people get scared, they think, ‘Ha, he is bringing communism back’. The thing is, with selfishness, things won’t go right. So we need to banish all selfishness and finally risk to ‘love.’ That’s what is important.”

And the great Mahlasela laughs, his eyes looking at you with sparkles, his tall body filling up the space like a not-so-dormant volcano. His new album “Say Africa”, recorded at the Haunted Hollows Studio in Charlottesville in the US, working with famous producer and musician, Taj Mahal, is the epitome of his joyful, engaged and inspiring look on life. The album is a compilation of African folk melodies, a million pieces of stories scattered around, a walk hand in hand with South Africa’s greatest griot. Spreading Mandela’s message as an official ambassador to Mandela HIV/Aids initiative, 46664, and founder of the Vusi Mahlasela Music Development Foundation, he aims to protect traditional music via education and keeps on giving back to his country. Mahlasela is concerned, involved and holds opinions on sensitive current affairs.

Questioned about the ‘Kill The Boer’ debate, he replies, his words toned down with diplomacy: “Well, I’ve been watching the court case. It is dealing with one specific song. And growing up during the struggle, there were many, many songs that were related to (this time). A lot of songs, some that were wondering about our parents, ‘where are your kids? Where have they gone?’ those kids who left the country, to enlist in a fight, to fight outside of South Africa, to get education, talked about the struggle in different places. So, those were songs that were significant, speaking about the struggle. But, in today’s context, the understanding is that it’s about ‘killing people’, then it’s wrong, nobody has to be killed, nobody has to pay, certainly not because of a song. It would really be an expensive mistake. Now, this said, I’m happy that this country is going somewhere. Those who have lodged those kind of complaints, they have initiated a dialogue. There is an African idiom that says: ‘If you want to make love to a mermaid, learn to make love even in icy water.’ And that means to compromise. And I think through compromise, there will be some positive result, no matter what happen, because people are talking. If you don’t risk to do this, if you don’t risk talking to one another, visiting places you wouldn’t have been to – like during Apartheid, where people were packed into very specific areas – it will remain wrong. And it’s all about the context.

“Because yes, when you talk about the struggle, you also talk about guns and fights and killings. But it is not only about those things, you know. We struggle every day to get the things we really want, we have visions we want to reach, and the struggle is also about important things in life, but don’t disturb the vision. As long as it is good, as long as it is not about bringing any harm to anybody, then don’t disturb the vision.”

Don’t disturb the vision, the man said. “Today we are getting so disturbed, so confused, we are losing ourselves, we are unstrapping each other of who we are. People are being absorbed by a ‘super-culture’ (in which) you have to conform. You can’t be yourself anymore. That super-culture is sucking everything out of you. But through music, it will be fine, music reminds you who you are. Music has life. Music is life.” Mahlasela’s message is simple, powerful and encouraging. And his music is the same. Standing on stage, song after song, he paints portraits of people, alive or the ones who are not with us anymore, infamous or unknown, moments of life, strong reminders of his home country, vocal prints of the African continent. He embraces his audience with his voice and there is no other way than falling in love. And reflecting.

And when the lights switch off, when the curtains go down, one will walk away remembering his advice, a quote from one of his favourite writers, Ngungi Wathiongo:  “‘Africa, teach your children ancient songs so that they will glorify the spirit of collective good.’ The collective good is Ubuntu.” It’s time to share. DM