Run, Gaza, run – the strip’s first marathon is both winner and promise 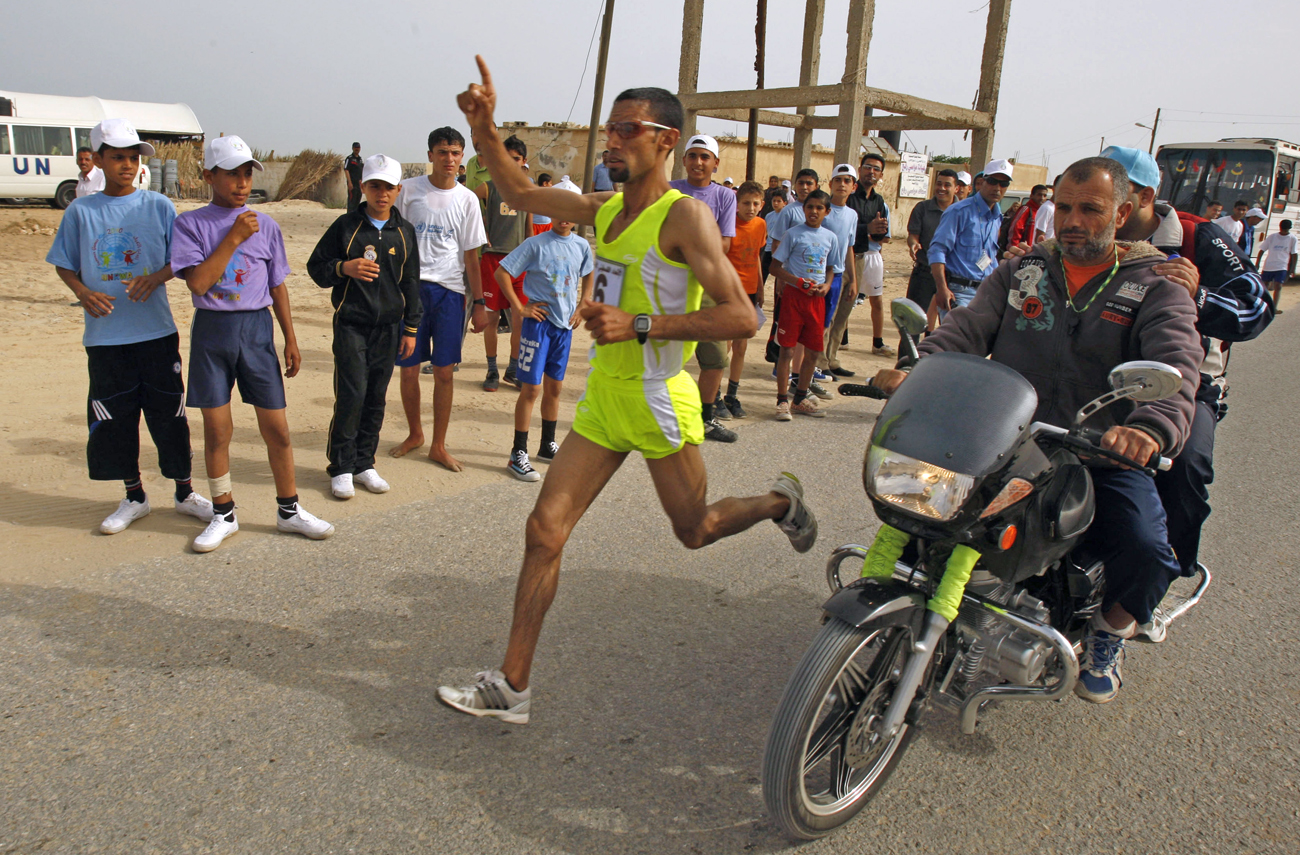 Gaza, the Hamas-ruled chunk of real estate that has for far too long been a focal point of the Israeli/Palestinian conflict, is not typically thought of as a sporting Mecca. However, on 5 May, it hosted its first marathon. Folks in Gaza are more accustomed to running from bullets than they are for chintzy gold medals. But the human spirit is the damndest thing. By RICHARD POPLAK.

Nader Masri is a short, sinewy Palestinian man, 31 years of age. He has a scruff of beard under his chin and neatly cropped black hair. His muscles look lashed to his bones, like a ship’s rigging. He is one of the very few Palestinian Olympic athletes. And he is the champion of the inaugural Gaza marathon run on a recent typically gloomy May morning. His time was more than acceptable for a speedy amateur—2:42:47—but unspectacular by the standards of the official world record, held by Ethiopian Haile Gerbrselassie at2:03:59. The fastest marathon time belongs to Kenyan Geoffry Mutai, at 2:03:02 in Boston. Masri, like Mutai, could not have competed for the record—only looped courses that force runners into both a tail and head wind are eligible. Yet his achievement is worth a standing ovation.

Gerbrselassie and Mutai, after all, did not have to contend with the potholed, shot-up, decaying roads of Gaza. They did not have to suck in air that smells like jet fuel nor dodge donkey carts. Masri began his 42km run in the town of Beit Hanoun, and crossed the finish line in Rafah. (Gaza is, conveniently, almost exactly the length of a marathon.) While New York boasts about 45,000 participants, the full Gaza marathon fielded a group of nine brave souls, a mixture of Palestinian athletes and NGO workers. But as any race organiser will tell you, you have to start somewhere.

The organiser in this case is a woman named Gemma Connell, who finished the race in the not inconsiderable time of 4:45 minutes. Connell works for the UN Relief and Works Agency (UNRWA), under whose auspices the marathon was run. UNRWA’s spokesman, Chris Gunness said, “There is the London marathon, the New York marathon, the Boston marathon…and now we have the Gaza marathon.” One braces for the Kabul marathon.

The UNRWA-organised event had another mandate: To raise money for the Gaza Summer Games. The Games, in their fifth year, are a recreational programme set up so the children of Gaza can, according to UNRWA’s website, “Enjoy a rare moment of joy and normality”. Indeed, there are few places on earth grimmer than the Gaza strip—the tension, the dust, the noise and the sense that the walls are closing in on you make for a nasty living experience. You can grab the statistics elsewhere online, dear reader, but suffice to say, moments of joy and normality are most certainly rare.

Sports are a vessel for jingoism and nationalist fervour certainly. But they are also a home for the individual to excel, to reach beyond herself and enter a realm that is outside of normal. For those of us who have competed in endurance events, the portal opened up by running is a sacred space where one communes with something beyond the ordinary. It’s a space for which one has to reach out; the dozens of kids who ran in relay events along the Gaza marathon course have at least been shown the way. How far they take it is up to them. Nader Masri’s greatest achievement is not so much his running time, but the fact that, amid the tumult of Gaza, he was able to push himself beyond the limits of the ordinary. His run made a fundamental statement about what we’re capable of as human beings.

And if we are indeed capable of greatness, then surely fixing Gaza’s horrendous situation is within our capabilities. Of course, it is. But also embedded in sport is a sense of the warlike, a chamber of conflict that is uniquely human. Sport is often a proxy battle, employing all the rituals of war. In this, Nader Masri is another symbol. We’re great and we’re terrible. We fight and we soar.

My favourite image from the Gaza marathon is of a runner, prostrate on the ground, having fainted near the finish line in Rafah. Men stand by, trying to revive him. It mimics the hundreds, the thousands of such images that depict bloody Gazans lying in the dust. It’s a piece of theatre, a beautiful summation of everything human. Even in hell, we are able to play. And play takes us to an essential part of ourselves, outside of the ordinary, firmly inside the sublime. DM

See Gaza marathon in pictures at The Guardian.

Photo: Palestinian long-distance runner Nader al-Masri (C) takes part in a marathon organized by the United Nations for Relief and Works Agency (UNRWA) in Rafah in the southern Gaza Strip May 5, 2011. Masri on Thursday won the first marathon in the Gaza Strip, a coastal territory only just big enough to run the distance in a straight line. An UNRWA spokesman said the run had raised over $1 million in sponsorship for children’s summer camps in the impoverished territory. REUTERS/Ibraheem Abu Mustafa.