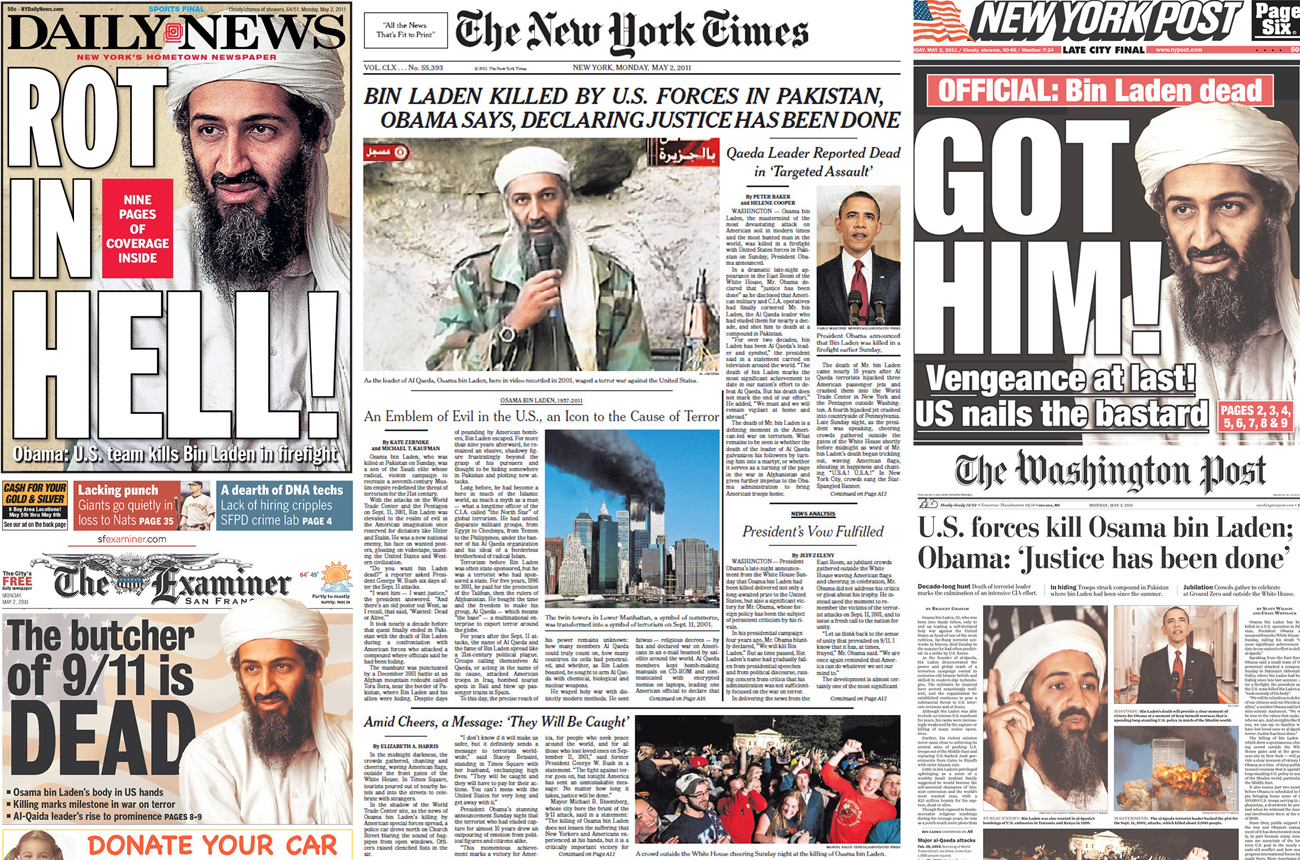 The news that world’s most-wanted terrorist was dead came as glad tidings for a US press fallen on hard times. Osama bin Laden’s death not only gave tabloids a rich source of sensation, but bumped up newspaper sales across the board. By MANDY DE WAAL.

“We got the bastard”

“Got him! Vengeance at last! US nails the bastard!”

In the midst of a declining and recessionary print news market Osama bin Laden’s death proved a massive shot in the arm for US newspapers as opportunistic tabloids maximized exclamatory headlines to cash in on an Americans hungry for every detail of the al Qaeda leader’s demise.

Tabloids like the Philadelphia Daily News and conservative titles like the Rupert Murdoch-owned New York Post openly revelled in announcing the death of the man who was the FBI’s public enemy number one.

News of Bin Laden’s death broke late on Sunday night in the US as many newspapers were readying to go to print, which meant they adjusted front pages at breakneck speed and bumped up print orders to accommodate the anticipated consumer demand.

NYT’s communications department tweeted that 165,000 extra copies of the “historic” newspaper that reported on the death of the “emblem of evil” and “icon to the cause of terror” were printed, two-and-a-half times the normal order. Mashable reported The Washington Post also bumped up its print order as did smaller presses like The Star-Ledger in New Jersey and New York’s The Poughkeepsie Journal.

“Stop the presses” – the mother of all newspaper stock phrases – was well used as, after Obama made his announcement, many US newspapers had to stop mid-run. NYT’s Eileen Murphy told Media Bistro: “The news broke really late and by that time we were already in the middle of the print run. There was some discussion and because of the magnitude of the news, the order was given to stop the presses.”

Was the delay at NYT caused by a debate on whether or not Bin Laden would be stripped of ‘Mr’, the normative NYT honorific for the dead? Jim Romenesko of journalism at The Poynter Institute leaked a memo from NYT management dictating that the paper would not be conveying its usual respect when referring to the deceased in the story they were about to print.

“At Jill and Bill’s request, we dropped the honorific for Bin Laden,” the memo from the paper’s associate managing editor read. “Without a ‘Mr.’ in front of his name, it was decided that we should capitalize the “B” in Bin Laden on second references.”

What is certain now after days of debate in the White House is that, if it is up to Obama, Clinton et al ,there will not be another round of front pages featuring Bin Laden’s corpse with emotion-laden headlines.

In a pre-recorded interview with CBS News’ “60 Minutes” due to air on Sunday, Obama is said by White House press secretary Jay Carney to have stated the photographs were too graphic and would incite violence if used. “It is important for us to make sure that very graphic photos of somebody who was shot in the head are not floating around as an incitement to additional violence or as a propaganda tool. That’s not who we are. We don’t trot out this stuff as trophies.”

Will the photos remain suppressed when the media and US conservatives are baying for their Abu al-Zarqawi moment? The news of Obama’s photo decision was just out when Reuters reported it had been sold photographs of three dead men at the Bin Laden Abottabad compound. The photographs were said to have been taken by an unnamed Pakistani security official, however, Reuters added that none of the men in the pictures looked like Bin Laden.

Al-Zarqawi was the founder of the Iraqi arm of al Qaeda and was once the most-wanted man in that country after being responsible for a number of bombings, beheadings and other atrocities during the Iraq war. After being killed in a targeted US air strike, Al-Zarqawi’s body was displayed to photographers and his corpse became front-page fodder in the US in June 2006.

The Nation reported that the New York Post devoted a full front page to Al-Zarqawi’s head five years ago with the headline “Gotcha!”. A quote bubble emanated from the dead man’s mouth that read: “Warm up the virgins”.

Despite the best sensibilities, it appears that a picture of a dead Bin Laden was distributed to some senators, fuelling fears that the grimmest front pages in this media saga could yet come. We’ll be watching. DM