Holocaust Day, Israel and bin Laden: The fear and the paradox 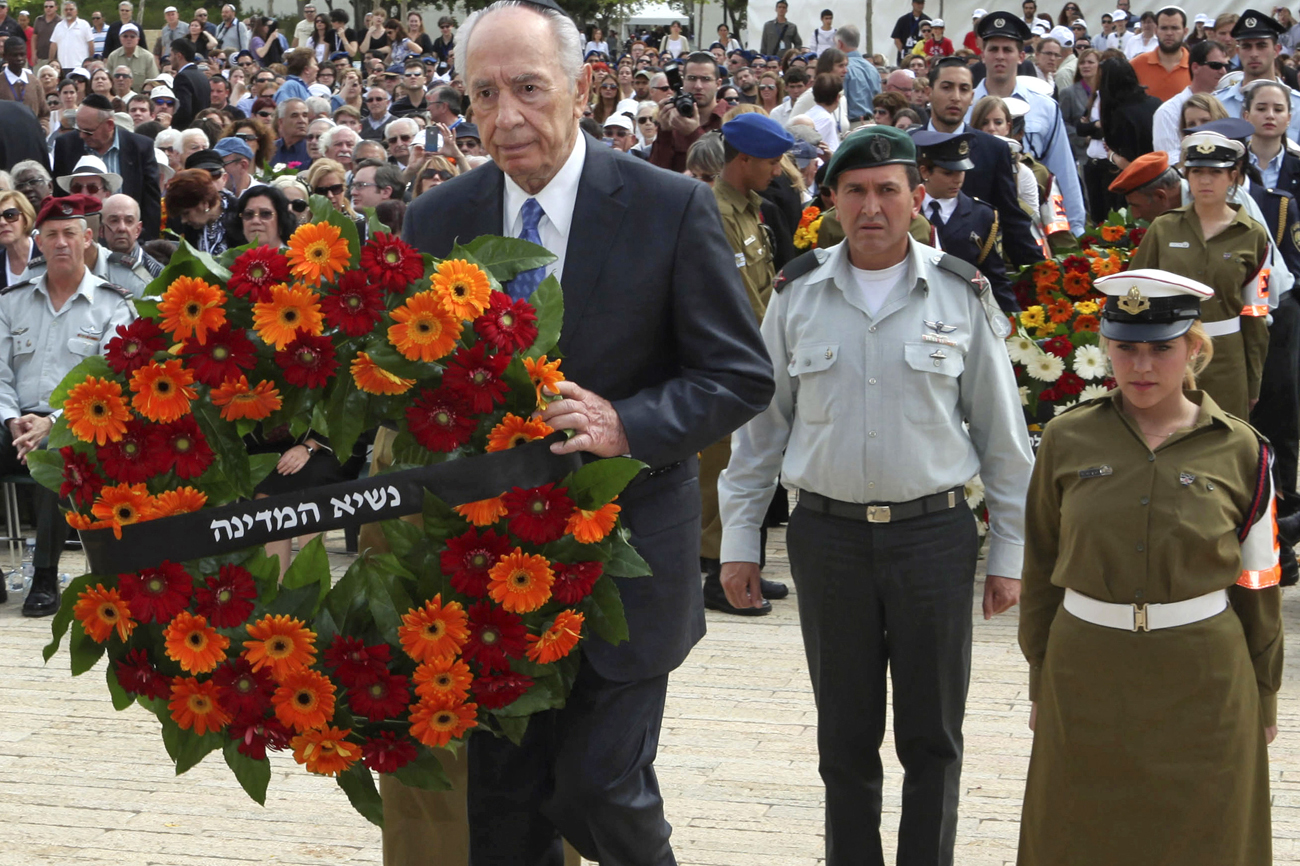 To Jewish commentators in Israel and the US, it was no coincidence that news of Osama bin Laden’s death came hours before the commencement of Holocaust Memorial Day. But Israeli President Shimon Peres once again got the tenor of the day wrong, as evidenced in US President Barack Obama’s statement to the Jewish people. By KEVIN BLOOM.

To hear the sirens sound in Israel on the morning of 27 Nisan, a date in the Hebrew calendar that falls around late April or early May, is to watch an entire nation come to a standstill. Cars stop wherever they happen to be in the traffic, pedestrians freeze in place on the sidewalks, shopkeepers and traders lay down their merchandise and leave their tills open as the wailing reverberates throughout the country. The day, known as Yom HaShoah (Holocaust Day), or Yom HaZikaron laShoah ve-laGvura (Holocaust and Heroism Remembrance Day), marks the anniversary of the Warsaw ghetto uprising – its purpose is to not only remember the 6 million Jews slaughtered by the Nazis during World War II, but to relive the heroism of the thousand or so Jewish insurgents who, armed only with pistols and revolvers, took on the might of the German army in 1943. This year, Yom HaShoah fell on 2 May. Hours before the clock struck twelve, President Barack Obama announced that American troops had killed Osama bin Laden in Pakistan.

The symbolism of the timing was not lost on Israeli commentators. Writing in the Jerusalem Post, Dovid Efune observed: “The juxtaposition of Holocaust Memorial Day and the killing of Osama bin Laden should be seen as no coincidence. The lesson is clear; the free world must be consistent in supporting the eradication of such evil, in all its forms, wherever it is found. The efforts of the West must be uniform and relentless. Justice and vengeance will not suffice, only continuous striving to eradicate this depraved inhumanity. Never again.”

In the diaspora, the Conference of Presidents of Major American Jewish Organisations issued a similar statement. Congratulating the US intelligence, military and security personnel – under both Bush and Obama – who since 2001 had been hunting bin Laden, the conference stated that the Al-Qaeda leader was a profound threat to the Jewish people, and that the announcement of his elimination, coinciding as it did with Yom HaShoah, “is a reminder that those who perpetrate evil will ultimately be held to account.”

Given these sentiments, it would be a mistake to assume that Israel’s senior politicians were unaware of the coincidence in the timing. The reason nothing was said at the major memorial service, held at the Yad Vashem Holocaust museum in Jerusalem on Sunday night, was arguably because Obama was still a few hours away from making the news official (and it would have been a faux pas of the first order to get the jump on the US commander-in-chief). Still, what President Shimon Peres did say at Yad Vashem cut to the very core of the State of Israel’s self-conception: the idea that the Holocaust reminds Jews that they are “alone”; that just as no planes bombed the death camps in the 1940s, no ally is going to defend Jews against threats of annihilation from the likes of Iran; that the one and only safeguard against the deadly and committed enemies of the Jewish people is always going to be the Israeli Defense Force.

Would Peres have changed his speech had he been allowed to mention what had just happened in that compound 35 miles outside Islamabad? Unlikely. Because what he also said was the following: “All citizens of Israel, regardless of religion or race, know that Israel is, was, and is committed to being the most anti-racist country in the world.”

Never mind that it was American forces who’d just assisted Israel enormously by depositing a quick burst of fire into the person of bin Laden, or that America had been a consistent and proven ally of Israel in its own “war on terror,” it was this last statement that really exposed the flawed logic under which the country’s militaristic leaders labour. The Holocaust was second-to-none the most reprehensible act of wholesale racist genocide the world has yet seen; to use the occasion of its commemoration to infer indirectly (and by comparison) that Israel’s actions in the occupied territories are never racist is, to say the least, disingenuous.

As noted in a previous article on this website, which quoted Haaretz columnist Carlo Strenger and no less an authority than the (conservative) Israeli politician Natan Sharansky, Israel has a deep-rooted and often counter-productive investment in its own fears. The understandable source of these fears is more than three millennia of persecution, culminating in the Holocaust.

But an effort to move beyond the fear is an effort to believe Obama when he states, within a day of announcing the death of bin Laden, that “more than six decades after the Holocaust, and at a time when Holocaust denial and genocidal ideologies persist, our grief and our outrage over the Nazis’ murder of six million Jews and so many others have not diminished.”

The connection to the present – and the untruth in Peres’s paranoid assertion that Israel is “alone” – was then made abundantly clear by the US president: “Remembering these events only reinforces our solemn commitment to confront those who tell lies about our history and to stop the spread of hate in our own time.” DM