Jubilation, speculation and admonition at death of Osam...

Jubilation, speculation and admonition at death of Osama bin Laden 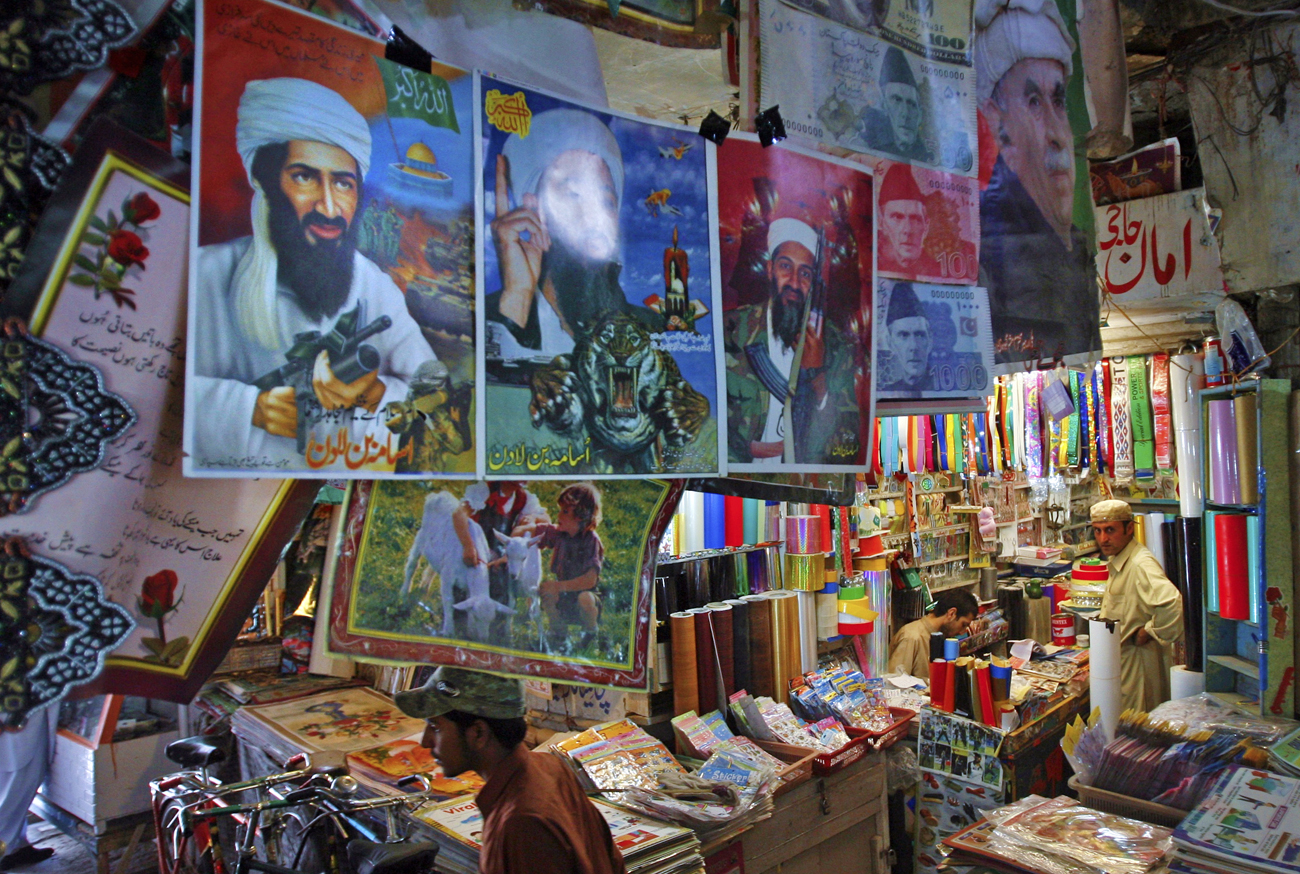 It was inevitable that the death of the world’s most-wanted terrorist would prompt a flurry of speculation, fuelled by real news, half-news and unconfirmed reports. What we do know for sure is that some very hard questions will be asked, especially of Pakistan. How was Bin Laden living right under the noses of their military and intelligence personnel? By SIPHO HLONGWANE.

The biggest confusion hours after the death of Bin Laden was announced by US President Barack Obama was what had happened to the body. Obama had confirmed the US was in possession of the body, but the speculative consensus was that he had been buried at sea. CBS News quoted US officials saying this step had been taken after the Saudi government had been “unwilling to have his remains repatriated”. Bin Laden was born in Saudi Arabia, but his citizenship was rescinded in 1991 after he was connected with several terrorist incidents.

Obama announced the al Qaeda leader’s death after a raid on a compound in Abbottabad, about 150km north of the Pakistani capital Islamabad. The New York Times reported that after years of cold leads, a possible clue to Bin Laden’s whereabouts came in August last year. “A trusted courier of Osama bin Laden’s, whom American spies had been hunting for years, was finally located in a sprawling mansion 35 miles north of the Pakistani capital, close to one of the hubs of American counterterrorism operations,” NYT reported. “The compound was so secure, so large, that American officials guessed it was built to hide someone far more important than a mere courier.

“What followed were eight months of painstaking intelligence work, culminating in a helicopter assault by American military and intelligence operatives that ended in the death of Bin Laden, and concluded one of history’s most extensive and frustrating manhunts.”

The most striking thing about Bin Laden’s location was its proximity to Pakistan’s capital. The compound was located a mere 700m from the Pakistan Military Academy. Since the attacks of 9/11, the popular image of Bin Laden’s hideout had always been a cave in the mountains somewhere between Pakistan and Afghanistan.

Questions will now be asked of Pakistan. How did their intelligence manage to miss the world’s most-wanted man living right under their noses in a large, walled mansion. Lara Logan of CBS News, said even the Pakistani intelligence service had a presence in the city. How did they all miss Bin Laden? Logan said, “A number of US officials both in the CIA and on the military side who have been involved in the hunt for Bin Laden told me tonight that they never believed he was in a remote area. They always believed he was in a city. So they’re not surprised Osama bin Laden was sheltering in a compound with 24-hour lights and all the amenities of life that we’re used to and not eating nuts and berries in some cave.” Photo: A screen grab from FBI’s Most Wanted website taken May 2, 2011 shows the status of Osama bin Laden as deceased. REUTERS/FBI

The news of a raid in Abbottabad was broken on Twitter by a blogger who witnessed the helicopter raid and gunfight without realising what it was about.

Britain has told its embassies to review their security for fear of reprisals, according to Al Jazeera. This follows the US’s travel alert issued earlier.

Americans gathered outside the White House and Ground Zero showed open jubilation at the news, but the reactions from some other organisations have been more subdued. The foreign ministry of India said, “The world must not let down its united effort to overcome terrorism and eliminate the safe havens and sanctuaries that have been provided to terrorists in our own neighbourhood. The struggle must continue unabated.”

Islamic organisations such as the Washington-based Council on American-Islamic Relations said, “We join our fellow citizens in welcoming the announcement that Osama bin Laden has been eliminated as a threat to our nation and the world through the actions of American military personnel. Pakistan’s foreign ministry issued a statement that was very careful to place responsibility for the raid on the Americans.

“As we have stated repeatedly since the 9/11 terror attacks, Bin Laden never represented Muslims or Islam. In fact, in addition to the killing of thousands of Americans, he and al Qaeda caused the deaths of countless Muslims worldwide,” Cair said. Photo: Senior Hamas leader Ismail Haniyeh speaks to the media during a news conference in Gaza City May 2, 2011. The Palestinian Islamist group Hamas on Monday condemned the killing by U.S. forces of Osama bin Laden and mourned him as an “Arab holy warrior”. REUTERS/Ismail Zaydah.

The Egyptian Muslim Brotherhood called for America to withdraw its troops from Iraq and Afghanistan, saying, “With Bin Laden’s death, one of the reasons for which violence has been practised in the world has been removed. It is time for Obama to pull out of Afghanistan and Iraq and end the occupation of US and Western forces around the world that have for so long harmed Muslim countries.”

Possibly the strangest statement issued so far came from the Vatican, which, according to Reuters, said, that although Christians “do not rejoice” over a death, it serves to remind them of “each person’s responsibility before God and men”.

Although, the South African government’s statement was also… well, something. We quote it here in its entirety:

The Government of the Republic of South Africa has noted the news of the passing on of Mr Osama bin Laden as announced during the early hours of today, Monday 2 May 2011.

South Africa reconfirms the commitment to the system of global governance of multilateralism. Our resolve to support peace, security and development in the world remains. We call upon all countries across the world to cooperate in stemming the demon of terorrism, in all its manifestations, out of global politics.

The big question now, of course, is what al Qaeda will do next. The US and British governments are clearly worried reprisals will follow the death of Bin Laden and that these attacks may come from individuals acting of their own accord. “US counterterrorism officials have been planning all night for what may follow Bin Laden’s demise,” reported Lara Logan. Photo: Shopkeepers gather around television screens showing a speech by U.S. President Barack Obama as he announced the death of al Qaeda leader Osama bin Laden at a market in Quetta May 2, 2011. REUTERS/Naseer Ahmed.

“What they fear most is the ‘lone wolf scenario’ – individuals they cannot track and cannot do anything to stop who go into a public place and wreak havoc. Some of the most likely targets, officials say, could be areas where Americans are gathering to celebrate Bin Laden’s death, such as outside the White House or Times Square,”  said CBS News.

Logan said al Qaeda will most likely now consolidate in Yemen, where its Arab Peninsula branch is housed. A member of that branch has already condemned the killings, according to Al Arabiya news.

The news that al Qaeda itself believes Bin Laden was killed should help temper the conspiracy theorists who are already questioning the validity of the announcements. DM

Photo: Images of al Qaeda leader Osama bin Laden are displayed for sale at a market in Quetta May 2, 2011. Bin Laden was killed in a firefight with U.S. forces in Pakistan on Sunday, U.S. President Barack Obama announced, ending a nearly 10-year worldwide hunt for the mastermind of the Sept. 11 attacks. Obama said U.S. forces led a targeted operation that killed bin Laden in a compound in Abbotabad north of Islamabad. REUTERS/Naseer Ahmed