Analysis: Al Jazeera marries TV and social media in The... 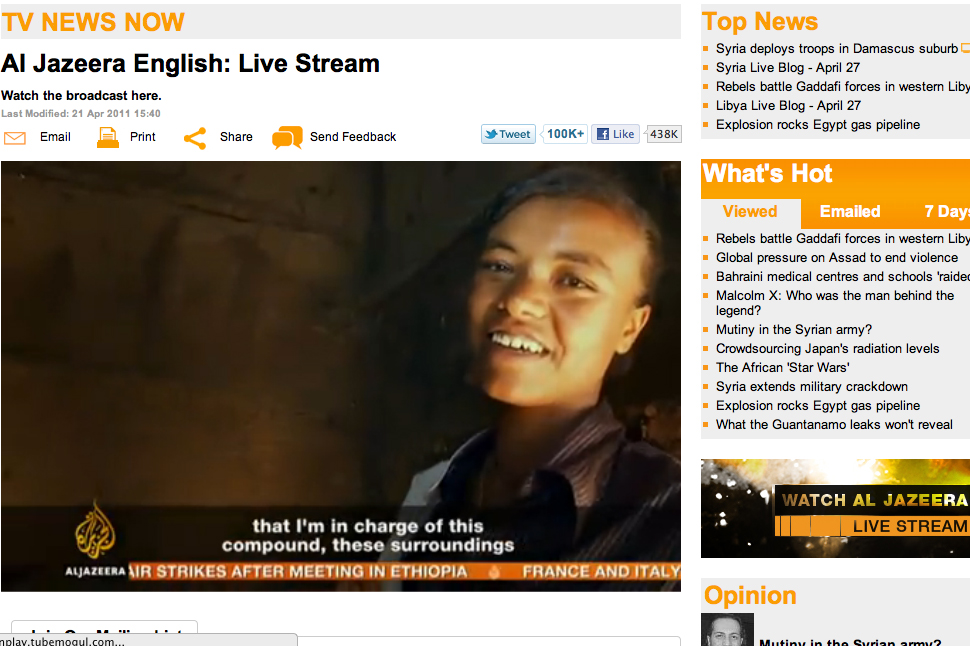 Al Jazeera’s English channel is to boldly (very boldly) tread where other news networks have so far only tiptoed, with a television show known as The Stream. It promises to incorporate social media in a way no other network has done before. Or rather, other networks have sort of tried and have been dreadful at it. What will Al Jazeera do differently? By SIPHO HLONGWANE.

Al Jazeera English (AJE) launched the web component of The Stream on Monday 18 April, and will be launching the full television show on 2 May. So far, the website has resembled a blog post, with offbeat stories from Syria, Egypt, the US, Hungary and Uganda. It is certainly eccentric (think: a less geeky Boing Boing), but that is exactly what AJE intends.

On its site, AJE describes The Stream as “a social media community with its own daily television programme on AJE. On television and online The Stream taps into the extraordinary potential of social media to disseminate news. The Stream is an aggregator of online sources and discussion, seeking out unheard voices, new perspectives from people on the ground and untold angles related to the most compelling stories of the day.”

It is, at its most elementary, a marriage of television and social media.

AJE is going after the sort of people who have stopped watching television altogether (the so-called “cord cutters”) by essentially asking the audience to participate in the editorial process. And mostly in America. The Stream will be based in Washington DC – a move that signals AJE’s strong intentions to make serious inroads into the American broadcast space.

AJE has not had much of a foothold in the US after the Bush administration convinced the American public to treat it with suspicion. However, the channel’s brilliant coverage of the “Arab spring” meant the US could no longer ignore AJE. In fact, the US needs it now, as much as any other news network.

According to the show’s co-host, Derrick Ashong, The Stream should be a 24-hour news show with a 30-minute anchored broadcast every Monday to Thursday, hosted by him and Shihab-Eldin. The broadcast component is repeated three times a day, and each will be tweaked so each new broadcast is fresh.

The site will use Storify, which transforms tweets, status updates and the other social networking building blocks into the more traditional “story” form, to mould the website content.

In an interview with Fast Company, Ashong referred to the online community interacting with the editorial team as “a self-selecting focus group”. Ashong said, “When we come to an editorial meeting the following day, we may say ‘Hey, there was a lot traction around this story, but people raised x, y and z questions that they want more answers to.’”

Ashong said they were specifically looking for “substantive and robust online discourse” so even if a story is trending worldwide, but isn’t emotive enough, they won’t touch it. We turn once more to the website, where AJE says, “This is not a show simply about the hottest viral videos or trending stories on the Internet. #8millionBeliebers and #TeamSheen will not figure on The Stream.

“Instead, our goal is to connect with unique, less-covered online communities around the world and share their stories and viewpoints on the news of the day. A key part of The Stream’s mission is to help its viewers discover the newest online tools and advice to develop and share their information through these fast-changing networks.”

This will, of course, come as an enormous relief to anyone who has been following the American media’s fumbling attempts to incorporate social networking into their shows. Possibly the most absurd of them has been CNN, which often confuses dipping into the social networks for opinions with actually lowering itself to social-media-level discourse. It’s a terribly thin line and CNN often crosses it with silly reports of “what is hot on Twitter right now” and the like.

AJE seems to have learnt that lesson. After all, we don’t need our TV channel to tell us what’s trending or what is hot online at any particular moment – we probably knew long before they did. If they can manage to find the sort of emotive story that is brewing online and then present it in such a way that they keep it alive, they could find themselves driving a trend, and not announcing its death (you know a trend is dead when it finally reaches TV).

The revolutions and protests across North Africa and the Middle East have shown the world the enormous communicative powers of social media. AJE showed that a television station that knows what’s cooking can be just as important as Facebook or Twitter in such situations. If anyone is to succeed in marrying the two, it will be AJE. DM