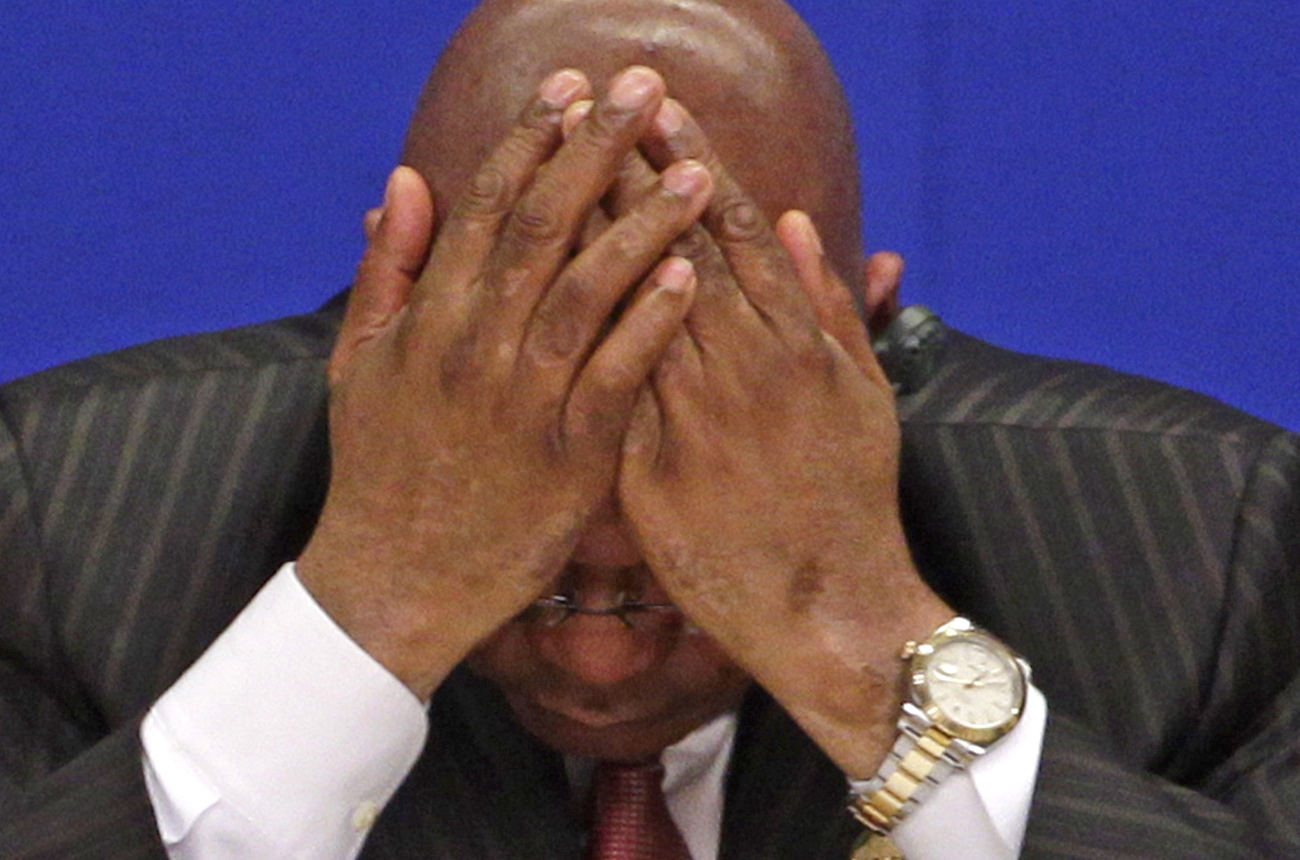 South Africa is never boring. It’s not known for its calm, sedate politics, its restful smaller towns (fancy a trip to Ficksburg?) or the clean streets of its bigger cities. It’s what, some would say, makes it fun and why so many of us would suffer an event deficit disorder of the first magnitude should we live anywhere else, except perhaps the Middle East. But a long weekend is a time to pause and reflect, and look where we are and where we are actually going. By STEPHEN GROOTES.

After the events of the last two weeks, and Julius Malema’s incredible performance during his hate speech trial, his future deserves a closer look, as does that of the Tripartite “Alliance”. Oh, and it’s an election year.

Let’s start with that actually. Somehow this year’s local government elections don’t seem to be an event at all. There’s the odd picture of Helen Zille dancing with someone, and that’s it. Oh, and the strangest taste in North Stars ever. But the fizz is missing, the what do you call it, the razzmatazz. Of course, that’s because judging by what we can see, as opposed to what we can’t, it seems almost like the ANC has forgotten there is such a thing. Maybe the idea of external challenge to its power in elections other than the ANC’s own is not really high on anyone’s give-a-stuff list. Or, more likely, and infinitely more boringly, the party is short on cash and ideas at the moment. Or perhaps the yuan isn’t as strong as it was in 2009.

It’s not that the ANC needs to campaign to win elections. Anyone who doubts that, has missed the energy Zille and the DA put into the 2009 version. But you do need to campaign to bring out the vote. And that is really the ANC’s problem this time. It’s not that people want to vote for the DA, it’s that they’re don’t really care too much for the ANC, not anymore. In fact it’s hard to think of a time since 1994 that the ANC has been this unpopular. It’s not all entirely the party’s fault, being the first party to govern after the Nats was always going to be hard, but hope is giving way ever more rapidly to anger, and Zwelinzima Vavi’s warning that “the poor will march into the suburbs” is becoming ever starker.

But what’s really done the ANC over is bigger than that. It’s the problem that the party itself looks like it doesn’t care anymore. It’s about many things, the VIP bling that carries leaders into poor townships, the cars, the threads, the sunglasses, Tony Yengeni’s Maseratis, and perhaps even its permanently-engaged supreme leader. But the real issues have come with governance. People don’t care about all the above if their pie is growing. But it’s not. And that gets them really angry. And there are several phases to that – hopelessness, despair, anger, and the cycle starts again. At the moment, it seems people are despairing of the ANC.

This doesn’t mean we’re expecting any more change to the current municipal set-up, the party’s history is simply too glorious for that. But this election may be remembered as the one in which people started to not vote for the ANC. That means they could be vulnerable to two things. First, voting is a habit, and once you stop, you may not pick it up again. You fall out of the democratic process, and once you stop believing in that, hope deserts you completely. That feeds into the cycle of despair, and the rage we know is there. It’s a case of hoping our young men don’t look too far North. Then there’s the prospect of someone else exciting them. Either the DA, or more likely, the “Obama” candidate from the Left. Either way, the ANC is looking increasingly vulnerable to being squeezed from both sides.

So, what do we expect when it comes to counting the actual votes? We stick to our earlier prediction that the DA is likely to pick up votes here and there, and get bigger minorities in many municipalities. Cape Town and the rest of Western Cape are theirs. Joburg and Tshwane should see a larger blacker middle-class plumping for the DA, but the weight of numbers is still on the ANC’s side, should their voters actually decide to come out and vote. However, there’s a chance of a surprise, or a near-surprise. Port Elizabeth and Kimberley are hard to call, and have the potential for the biggest shock. We won’t put any money on either, either way. Having said all that, the ANC has been written off many times, so don’t get too excited.

The real fun and games of 2011 is likely to come, as ever, from the internal machinations within the ANC. While all of this should technically be on hold until the morning of 19 May, there’s been plenty of scurrying around anyway. Vavi has been busy with his warning that “we could have to call the President Zille” and our favourite Young Lion cub has been the centre of attention. We should look at him first.

Malema enters the second quarter of 2011 politically stronger than he has ever been. He’s fresh from defending the ANC’s heritage, and in doing that, has overcome the problem of having no struggle heritage himself. In short, he can now confidently answer Trevor Manuel’s paraphrased question, “What did you do in the war, Julius?” with “I took on the racists too”. The bit about carrying a gun as a 13-year old to Chris Hani’s funeral won’t hurt.

This seems to make him a shoo-in for another term as ANC Youth League leader during that election in June. His main challenger, Lebogang Maile may feel his physical integrity is safer in his Gauteng MEC’s office than at Gallagher Estate on 16 June (the conference is due to start on Youth Day… he is cunning, that Malema). So then, what will he push? Nationalisation, of course. And his land policy proposals, which involve losing the “willing buyer willing seller” principal. It also means he will be a stronger force come next year’s succession debate.

The two people who lose from this are not hard to guess, ANC secretary-general Gwede Mantashe, and President Jacob Zuma himself. Both must have watched the TV coverage of the hate speech trial with less than complete enjoyment. Malema’s made no secret of his antipathy for Mantashe, and already he’s gone pretty close to the line on his opinion of Zuma. It seems that barring a massive political event, or another brush with the ANC’s disciplinary committee, he will be major player in next year’s goings-on.

And make no mistake, those goings-on have already started. We will see more “spy reports” and dirty tricks. The ANC seems destined to suffer more divisions for the next little while. This will feed into more problems within the alliance. If you were an ambitious alliance member (i.e. not the SACP!) you would have plenty of scope to capitalise on a divided ANC. And why not, so you back the candidates you like, and hope for the best. Which means your opponents in the ANC fight back, and back on the cycle we get.

This has predictable results for service delivery. And the final outcome of all that is less hope and more despair among the still-voting public. Which feeds into differing voting patterns. Which may sound boring. But trust us, it won’t be.

So where does all of this leave Zwelinzima Vavi? The man who generates so much political news and yet stands outside (technically speaking) the ANC? He seems to be pushing that line past what many would believe to be the break-up point. Surely you would think if anyone is going to break out of the alliance it would be him. Well, yes, perhaps. But not now, and not for a while. Some people think the alliance will last for 50 years. They’re wrong. Especially when you consider Cosatu itself has only been around for 25. But Cosatu is vying with the Youth League to be the ANC’s king-maker. It’s what makes Kgalema Motlanthe so interesting, but that’s another story. What we really need to expect from Vavi is this continued fight against corruption in all its forms. That seems to fit in with his current plans at the moment. So watch who he backs (or publicly doesn’t back) incredible closely. It could get very interesting.

There’s another side though to Vavi’s future. It’s what’s happening with those plotting against him. Remember those national working committee members who were going to sue him? Well, it seems they’ve been too busy to think about it much. Certainly Sicelo Shiceka is on leave, and seems to be very ill indeed. He also had a bad case of Sunday Times-ophobia, something he caught from Bheki Cele. Vavi may reckon that particular illness is contagious, and could spread to some of his other enemies. It certainly seems like it at the moment.
As we said, South Africa is never boring. DM