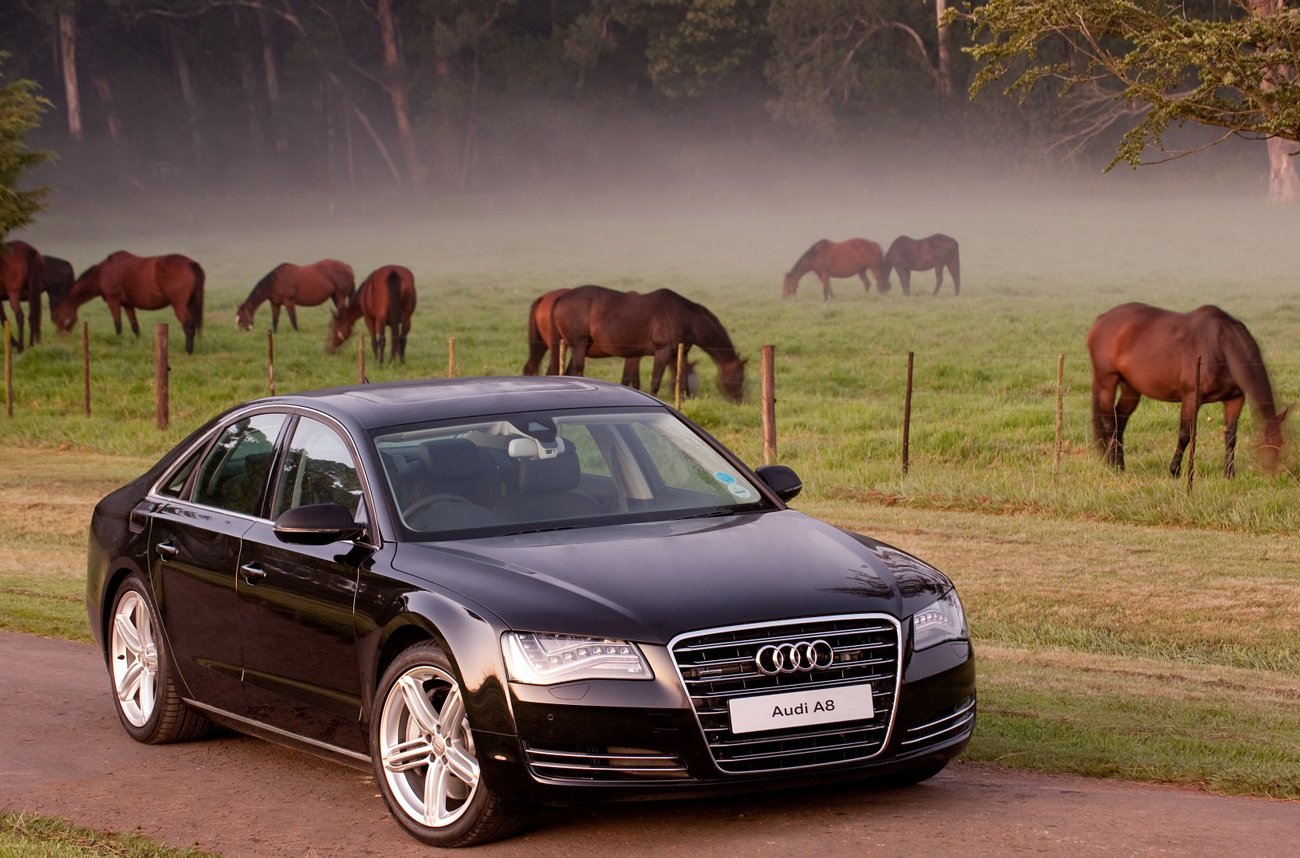 Who still buys big, flashy cars? Of course, government ministers do – with tax payers’ money. Some captains of industry do, usually to emphasise their social status and self-importance. And a few individuals do, simply as an act of indulgence. But for the most, even high net-worth individuals prefer to spend their daily commute in slightly less obtrusive, if no less sophisticated machinery. So, where does that leave a car like the Audi A8 4.2 TDI? By DEON SCHOEMAN.

Nobody has been in the big, luxury car game longer than Mercedes-Benz. Yes, Rolls Royce would eventually ascend to regal heights with its exclusively large and aristocratic machinery. And Bentley would transcend from sports car to luxury car too.

But big, swanky, imposing Mercedes-Benz cars have been around almost as long as the Three-Pointed Star itself. And the S-class has become the epitome of large, luxurious flagship motoring. It signalled wealth and social arrival.

BMW started life as something a lot smaller. In fact, its primary products were aircraft engines and motorcycles, before it started ascending the ladder to automotive stardom. The transition was accomplished in remarkably short time, but even so, the first 7-Series only made its debut in 1977. Audi is the most recent entrant to the flagship car fray. Its first attempt to emulate its would-be peers was to shoehorn a V8 engine into the largest body on its books – the Audi 100.  Dubbed the Audi V8, it never posed a serious threat to BMW or Mercedes-Benz.

It would take another seven years before Audi launched its first viable S-class and 7-Series contender. The 1997 A8 became the world’s first production car with an aluminium chassis – or Aluminium Space Frame, as it’s still known. It was a bold statement of intent and a  brave move into lightweight construction, but for all its innovation, the A8 struggled to catch up to its German protagonists.

Almost 15 years later, the Audi brand is considered a true competitor in this top-end segment, with the current A8 more than a match for the Seven and the S. However, it’s also true that the automotive landscape has changed and continues to change. While there will always be a demand for luxury behemoths, the segment is shrinking, and the real battlefield has moved elsewhere, to greener, eco-friendlier pastures. Today, electric and hybrid technologies are top of the bragging list, with safety a short step behind.

Still, given the number of swanky saloons on South African roads, we’d have to say that the market for these juggernauts remains alive, if not necessarily well.

It’s true that government fleets and corporate buyers are still peppered with big, luxury sedans. But increasingly, they invite derision rather than admiration. And besides, there are slightly smaller, less ostentatious cars that offer almost all the space and trimmings of their senior siblings. Thus, the latest-generation BMW 5-Series offers almost everything the 7-Series does, but in a nimbler, more efficient and thus (slightly) more eco-friendly package. Merc’s E-class can make similar claims. And when the new Audi A6 arrives in July or August, it will place further pressure on A8 sales.

In other words, the most dangerous rivals of the elite-class cars are to be found in their very own stables.

Where does all of this leave the new turbodiesel-powered Audi A8 4.2 TDI? Well, let’s put it this way: If you’re shopping for a top-end turbodiesel flagship, there really is nothing else to buy. It’s that good – and that powerful. The Audi A8 is an imposing car – an automotive statement that demands attention and invites comment. Like its equally regal BMW and Mercedes-Benz rivals, the A8 epitomises seniority, achievement and status.

It also happens to encompass much that is automotive state of the art. Everything about this car is cutting edge – the aluminium construction, the advanced arsenal of safety features, the ergonomic convenience of its Multimedia Interface, the sheer opulence of its accommodation.

But nowhere is its technological prowess better expressed than under the bonnet. The V8 turbodiesel engine is a far cry from those arthritic, noisy, normally aspirated diesels that used to power cream-coloured, red-leathered Mercs on farmyards around the country. Granted, those engines could run on paraffin or castor oil, if need be. But they were puny, smelly and downright nasty.

The Audi’s V8 TDI is a tour-de-force of turbodiesel technology. It manages to produce an astonishing 258kW and a crunching 800Nm of torque from 4,134cc of German engineering. You could probably tow  a Boeing with the thing.

Perhaps more remarkable, and  more relevant, is that those output figures are accompanied by some pretty impressive economy and emissions figures. According to Audi, the big Audi will sip 50ppm diesel at a rate of only 7.6litres/100km in a mix of urban and open-road driving conditions, with commensurate CO? exhaust emissions of just 199g/km. Those figures would be considered admirable in compact car terms. But the A8 4.2 TDI measures 5.2m long, 2m wide and 1.46m tall. And it weighs 1,995kg – just short of two tons in other words.

More than any other car in this rarefied segment, this A8 manages to at least acknowledge and to some extent address the reputation for gas-guzzling and excess with which flagship sedans are usually burdened.

The performance figures epitomise effortless motoring. The A8 4.2 TDI won’t ever need to prove itself in the traffic light grand prix, but it will nip from rest to 100km/h in just 5.5sec, which will leave many a sports car and hot hatch trailing in its dust. The VW Golf R DSG we reported on recently does an identical time … More importantly, the A8 is a fun and involving car to drive. It feels wieldier than you’d expect of such a big car. The responses are smooth and instantaneous, with none of the inertia or delayed reactions usually associated with size and weight.

An eight-speed gearbox ensures just the right ratio for any given situation, and gear shift paddles allow manual control for those who prefer to be in charge.

Of course, Audi’s other masterpiece – Quattro all-wheel drive – also contributes here, allowing loads of grip and traction when you need it most. The ride is serene, but never too plush, and can be adjusted to offer sportier, tauter responses when required. Of course, it has all the luxury trimmings – leather, superb sound, electric everything, beautiful finishes and an aura of craftsmanship so often lacking in a mass-production world. And yes, it comprehensively addresses safety with a long list of passive and active systems that can address human error and stupidity with perplexing efficiency.

But the soul of this car, the one aspect that sets it apart from the rest, is the V8 TDI powerplant. It provides one of the few remaining reasons why one should consider buying such a top-end machine when there are smaller, better, more affordable cars from which to choose.

Very soon now, hybrid technology will make flagship models such as these even more eco-friendly, even more advanced than before. And if we can find environmentally friendly ways to produce sufficient electricity quickly enough before the greenhouse gases finally spell global catastrophe, electric versions will finally take over.

But for now, big cars like the A8, the 7-Series and the S-class are a dying breed. And while the A8 4.2 TDI is the cream of the current crop, Audi’s smaller cars will, ironically, be their finest and most convincing ambassadors in the future. DM