Anton Hammerl: Find him, free him, bring him home! 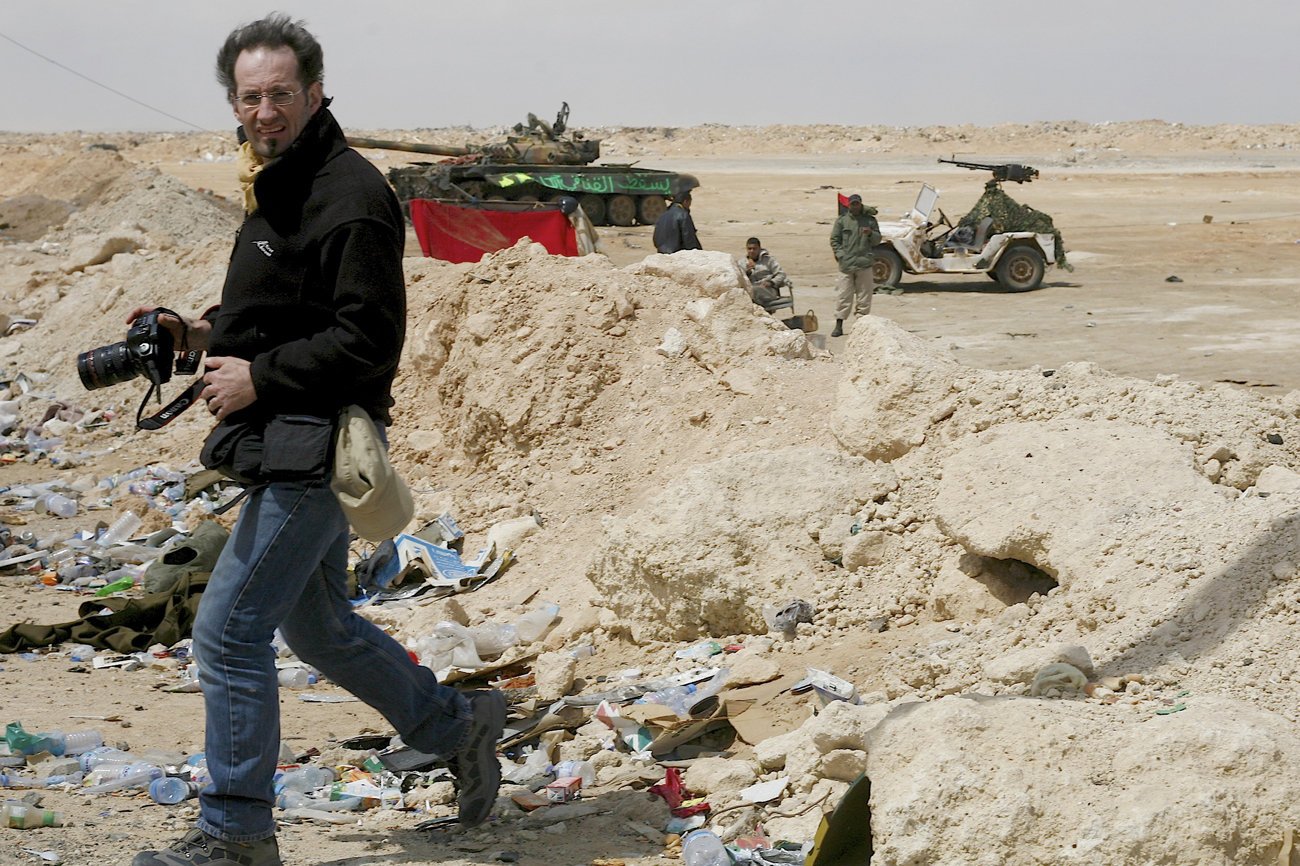 After 16 days of no news, there was finally something to celebrate on Thursday when detained journalist Clare Gillis phoned home. But for Anton Hammerl's friends and family, the call brought sobering news that the South African photojournalist was not with Gillis, Jim Foley, and Manu Brabo when they were captured in Libya. Which means we know even less about his whereabouts than we did before. Of huge concern is that (to the best of our knowledge) our diplomats have yet to make a breakthrough. President Zuma, it's time for a personal appeal to Gaddafi. By THERESA MALLINSON.

“We were so relieved to hear from our daughter after having heard nothing for 16 days,” Robert Gillis, Clare’s father, told The Atlantic on Thursday. “We still urgently appeal to the Libyan government to let her come home.” Gillis’s close friend Elizabeth Mellyn expressed similar sentiments “I feel a cautious, fragile relief,” she said. “Clare is not home yet – that is still the long and the short of it. Yet, there is reason for renewed hope.”

Foley’s and Brabo’s families can also feel a measure of relief: Gillis reported she had been kept in a military facility in Tripoli with them, until she was moved to a women’s prison earlier this week. Brabo’s childhood friend, Pablo Fanjul, was overjoyed at the news: “I’ve just found out,” he said. “It’s really great news that brings us lots of hope. We are looking forward to getting to know about Manu and speaking with him!” Brabo nonetheless was concerned about Hammerl’s situation. “We’re also worried, of course, about Anton. Even if they were not the four of them together, we hope they all are okay (and are) hoping and wishing as well that their release will arrive soon.”

For Hammerl’s family and friends, the lack of information continues – worsened by the fact that they now have less to go on than previously thought. Speaking to The Daily Maverick on Wednesday night, Hammerl’s brother, Alex Hammerl, said: “From what I’ve heard… (Anton) was travelling with the other journalists, and knew them. And in those situations, a lot of the time, the journalists travel in conveys. I think he was travelling with them; he just wasn’t in their vehicle.

“That’s what I like to believe, anyway.” Now that hope is fading.

The Daily Maverick was unable to reach Hammerl’s brother or wife, Penny Sukhraj, on Thursday night for comment on Gillis’s phone call. However, journalist Anso Thom, a former colleague, said: “We are relieved that contact has been established with Clare Gillis and that she is safe. The news that she reportedly does not know of Anton’s whereabouts is distressing, but is makes everyone even more determined to ensure that all is done to find him, free him and bring him home to his family.”

As part of this effort, a “Free Anton Hammerl” demonstration took place in Hyde Park, Johannesburg, on Thursday afternoon, following Wednesday’s demonstration in Cape Town. More than 50 people gathered on the grass at the William Nichol/Jan Smuts intersection, holding “Release Anton Hammerl” posters, and intermittently chanting: “Find him, free him, bring him home!”

Many of the demonstrators were friends and former colleagues of Hammerl’s. Journalist Peta Krost Maunder, one of the organisers, said: “I think it’s amazing how many people from the old days came out. Most of the people I know here have a past with Anton. I have never seen so many journalists at a protest. If Penny could see this, she’d be very, very moved.” Fellow organiser, Shayne Robinson, said he was extremely happy with the turnout, and that the important thing was to keep Anton’s story alive, and not to allow people to forget about his situation.

World Press Photo of the Year winner in 2010, Jodi Bieber, was one of the people attending the demonstration. She emphasised that Hammerl had just been doing his job when he was captured, and pointed out that newspapers rely on freelance photographers such as him. “Besides Anton being a friend, he’s a colleague as well.” said Bieber. “It’s very important to put pressure and make people aware; we really want him to come home. We want Anton back – it’s as simple as that.”

Hammerl’s father, Ludwig Hammerl, also joined the demonstration. “It’s great that people care,” he said, commenting on the turnout. But he is understandably having an incredibly difficult time. “I’m miserable, there’s no definite news, nothing,” he said. “Nobody knows anything, that’s the main problem.” Sadly, in the absence of any breakthrough, one has to assume that no news isn’t necessarily good news – it’s simply no news. The latest information from Gillis means we now have absolutely no knowledge of Hammerl’s whereabouts since 5 April.

In a statement released on Wednesday, the presidency said: “President Zuma instructed the department of international relations and cooperation to use the necessary diplomatic channels to obtain information regarding his whereabouts… The South African Mission in Tripoli has now partially opened and (is) doing everything possible to locate Hammerl.”

We’re sure they are. But it’s past time to advance from “doing everything possible”, to taking extraordinary measures to secure Hammerl’s release. And, to be honest, regardless of the political minefield of international relations, there’s nothing that’s impossible, or too extraordinary, about making a quick phone call.

Zuma was resoundingly criticised in the South African media for his failure to discuss Hammerl and the other journalists’ situation when he met with Muammar Gaddafi in Tripoli on 10 April. Despite this, when he spoke with Gaddafi on the phone on 17 April, Zuma again declined to raise the matter. But it’s not only within South Africa that Zuma has drawn condemnation for his lack of action. Brabo’s friend, Fanjul, was incredulous. “It’s unbelievable that your government travelled to Libya and did nothing about his release,” he said.

And yet, Zuma has personal access to Gaddafi in a way US President Barack Obama, and Spanish Prime Minister José Luis Rodríguez Zapatero, simply do not. We’ve said it before, and we’ll say it again: President Zuma, it’s time to make that call. In truth, it’s way past time – and we most sincerely hope it’s not too late.

Sure, Hammerl knew the risks when he went to Libya – all good conflict journalists do. But that makes it no less incumbent on the South African government to pursue every single avenue in its power to secure his release. That is one of the responsibilities of the state, to protect its citizens – within our borders, and outside of them.

Of course, Hammerl, Brabo, Gillis and Foley are not the only journalists detained in Libya. The Committee for the Protection of Journalists is keeping a running tally on journalists attacked in Libya. The numbers are necessarily imprecise, since the situation on the ground is so fluid. But CPJ Middle East and North Africa Programme Coordinator Mohamed Abdel Dayem says there are currently 15 journalists and two aid workers known to be detained, believed to be in government custody, or simply unaccounted for in Libya. As we in South Africa, Spain, and the US work towards creating awareness around the detention of our fellow citizens, let’s not forget the others who are imprisoned – most especially the eight Libyans, who have no hope of diplomatic pressure being applied on their behalf. DM