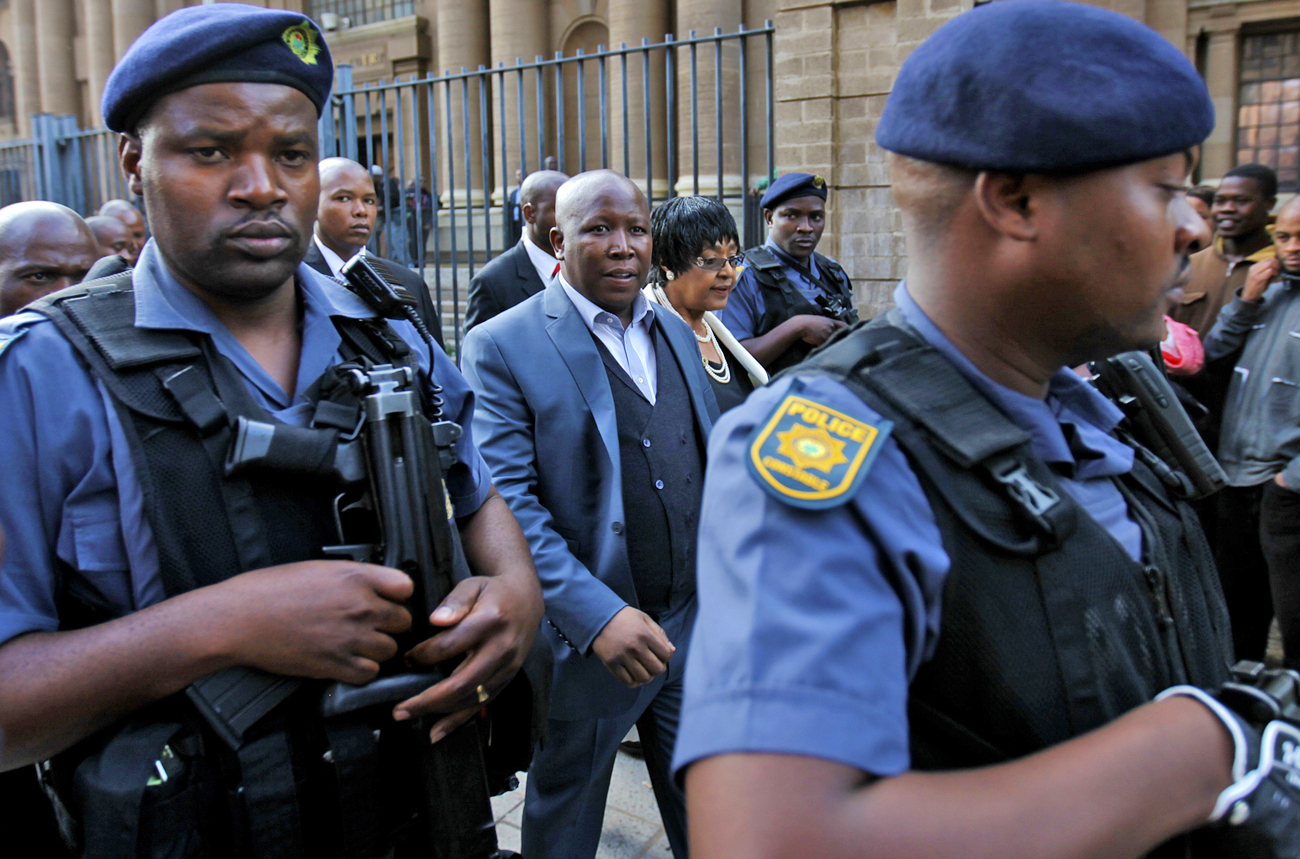 Can you feel it? It is here. The climax to the Julius Malema’s Hate Speech trial has arrived after days of painful debate around the case that pits SA’s extremes against each other, and brings all our nasty horrid histories into the open. Julius Malema himself took to the witness box on Wednesday, and faced the expected barrage of questions. It was about tension, intention and attention. But overall it was about politics. And Malema delivered a barnstormer. By STEPHEN GROOTES.

Julius Malema set the tone early. AfriForum’s advocate Martin Brassey SC basically spent a minute introducing himself, quite politely, but firmly. He explained that he wanted “legal answers from you Mr Malema, and not political ones”. Malema was equally firm, “No, this is a political case, it’s been brought for politics, I will give political answers”. It has hardline stuff from the country’s favourite hardliner, and it served as the headline for what was to follow.

Take this interchange, Brassey pointed out that many articles had been written about Malema, some questioning his intelligence and suggested he acted like a buffoon.

“I want you to know I do not share that view,” said Brassey.

“No, you share it, that’s why you say it here, so you can do it for the record, you’re doing it for the papers, but go on.”

Round one to Malema, then. And that was literally 10 minutes into proceedings.

By now it was abundantly clear Malema had made his choice. For a man who claimed “everything with me is political”, he was going to go the political route. He doesn’t care about the legalities. And he’s right not to. No matter what happens legally, this case has a long series of appeals still to get through, and if he loses, well, he can’t sing one song, but gosh he’ll be a hero for fighting the fight. So he may as well set out his stall politically.

Brassey moved on. He brought up the rather large gentlemen who seem to surround Malema around the court at the moment, if a movie were made about them it’d be called the “The Men in Red Ties”. Will Smith would rap the soundtrack. Brassey pointed out that he’d said in his opening address Malema “had the tendencies of a demagogue”. Judge Colin Lamont intervened here, suggesting another word be used. Brassey settled on “rabble-rouser” and said that Malema needed such security showed what he was.

Malema was having none of it, belligerently he said, “I never discuss security… I am here out of respect for the court and My Lord, who I come to court with is none of your business, I can come with my grandmother or my father.” Brassey seemed to have made up some ground. He used the opportunity to ask about the songs sung, and whether they had a “warlike tone”. It took a while, but Malema conceded they did, because, “We are warriors, we are heroes, we are not the children of cowards”, he said South Africans had beaten their enemies by defeating apartheid, and yes the songs are warlike.

Perhaps the trap that Brassey sprung most successfully was around the song “Kill the boer, kill the farmer”. You may remember it was sung by Peter Mokaba in the ‘90s (when he was not buying a radio in a hi-fi shop in Eastgate from your then-pimply correspondent) and then again around 2004. Then the Human Rights Commission ruled it was hate speech, and the ANC decided it shouldn’t be sung. Brassey started off by asking about Malema’s views on Mokaba, and Malema said he didn’t copy him, but was inspired by him. But he said the HRC had set the right boundary by saying the song shouldn’t be sung. Then came a long period of questioning about whether there was really a difference between “Kill the boer, kill the farmer” and “Dhubula Ibhunu” or “shoot the farmer”. It was tedious, but it seemed to come off.

Throughout the day Malema made it plain why he thinks he’s actually in court in the first place. First it was because he’s pushing for nationalisation, then it was because of the media, then because AfriForum wanted “two weeks in front of the cameras”, then it was the media, the legacy of apartheid and the media. Again and again the press was to blame. Firstly for picking on this song and not people singing “Die Stem”, secondly for its “agenda in perpetuating what apartheid stood for”, then the “ANC fought for freedom of the press and they abuse it now”. He pointed out, perhaps rightly, that if he agreed to only sing the song in closed ANC meetings, sources would tell the media what was happening anyway.

Perhaps the most startling story he told was of his trip to the Chris Hani funeral in April 1993. You may remember the assassination and what happened here at around that time. Malema says he was just 13 at the time and was given a 9mm pistol by the ANC for the trip. He “expected the order to fight to come”. Malema was just a teenager and was given a gun, loaded and ready for action. It certainly seems to be a true story. It’s incredible once again to think about how close we came to all-out war during that time. Incidentally, this relates to perhaps Malema’s best comment of the day. He was pointing out why he doesn’t need to use violence when he said, “In 1993 I was carrying a firearm, today I’m carrying political power”. It was Malema at his personal best, a strong political comment, made at a time when it will have huge impact that both shows his power and helps the case that he’s not a violent man. It was masterful.

Malema is now in perhaps the strongest position he’ll ever be in. He has live television and Twitter coverage, with nothing to lose, and plenty of people to blame for everything. From this vantage point nothing much could possibly go wrong for him. That could change, of course. Certainly when TAU’s combative advocate Roloef du Plessis gets up to ask questions tempers are likely to flair big time. But Malema seems the most likely to come out laughing. DM