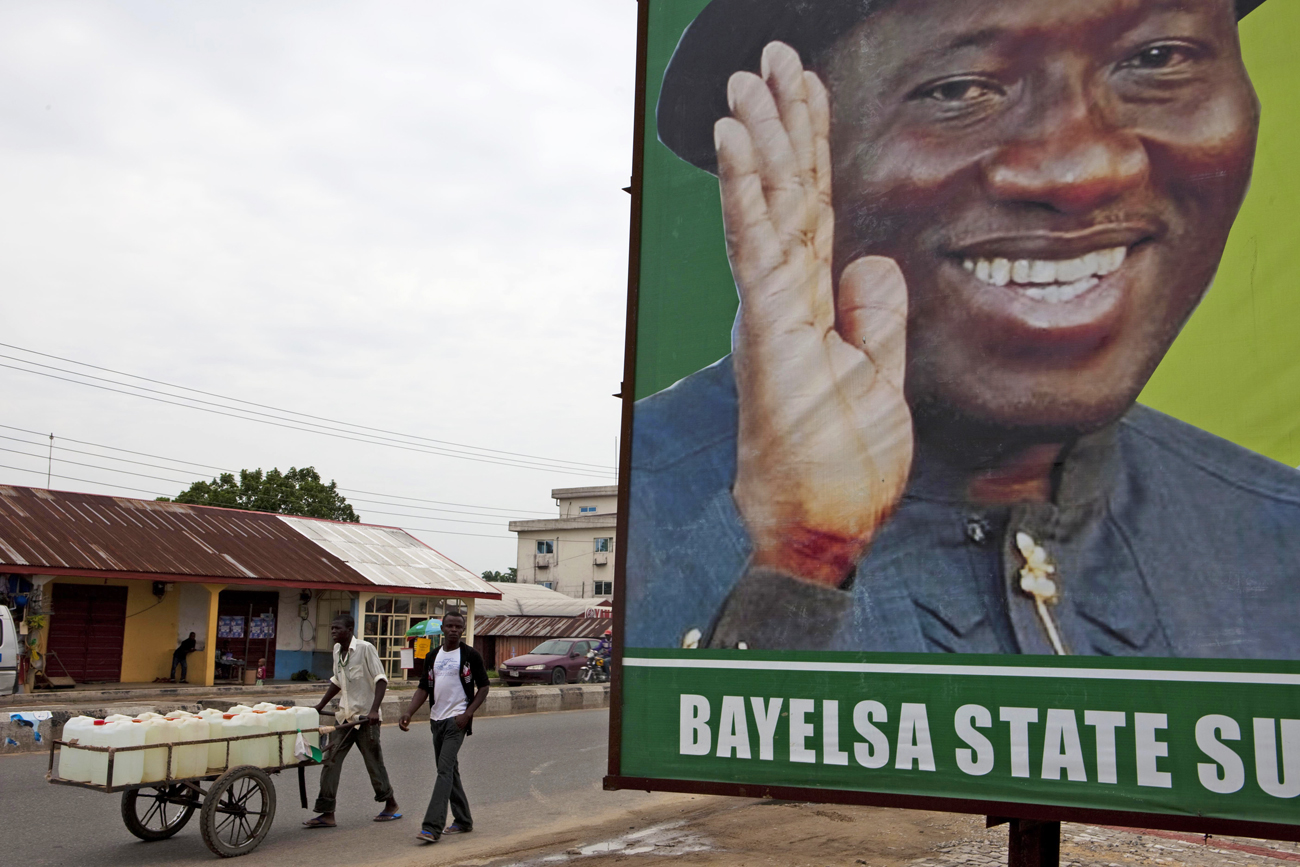 It was a low-key announcement in the end. The process took 10 minutes. But, finally, Nigerian electoral commision chief,  Attihiru Jega concluded: “Goodluck E Jonathan, of the People’s Democratic Party, having certified the requirements of the law, is hereby declared the winner and is returned elected.” By SIMON ALLISON.

Speaking to party officials and assorted journalists at the electoral commission headquarters in Abuja – and the tens of millions of Nigerians watching live on television – Jega painstakingly read through the vote counts in party alphabetical order, repeating each party’s tally twice. The man who is being credited with overseeing what have been Nigeria’s cleanest elections ever, was determined to follow the letter of the law even at this late stage.

Jonathan received more than 22 million votes, a full 10 million more than his closest rival, Muhammadu Buhari of the Congress for Progressive Change. The scale of his victory was unexpected, and a devastating blow to the Nigerian opposition who were hoping this would be their moment to take charge of the future of Africa’s most populous nation. At the very least, they were hoping the results would be close enough to force a run-off election, which would have pitted Jonathan against Buhari, forcing the opposition to unite against the hegemony of the PDP who have been in power ever since the end of military rule in Nigeria in 1997.

Jonathan, known as the “accidental president” after assuming power on the death of Umaru Yar Adua, and who defied his party’s unwritten “zoning” policy, which required a northern presidential candidate this time, had been perceived to be the weakest PDP candidate ever fielded. The opposition were certainly heartened by their performance in the National Assembly election last week. While the PDP retain a significant majority, they lost a lot of seats and will not be able to steamroller legislation through parliament anymore.

But everyone underestimated Jonathan’s popularity. His image as trustworthy, his aggressive courting of the youth vote and his focus on national unity over regionalism kept people voting for him even as they abandoned the PDP at the regional level. His acceptance speech echoed these ideas: “We have, by this election, reaffirmed our unity as one nation under God; reiterated our faith in democracy and underscored our determination to fully join the free world where only the will of the people is the foundation of governance.  We will not let you down.  We will not let Nigeria down,” he said.

But as Jonathan and the PDP were celebrating, the opposition were preparing their arguments. The national secretary of the CPC attempted to storm into Jega’s office in Abuja to hand him a petition requesting election results be withheld until they were subjected to a “forensic analysis”.

“From the actual result at the polling booths [the CPC’s candidate] Buhari is the winner of the presidential election,” Buba Galidima alleged, claiming results had been fabricated in certain regions. His were not the only allegations of electoral malpractice. Hundreds of reports have been made of underage voting, mishandling of votes and voter intimidation across the country. However, these have been dismissed as inconsequential by the African Union monitoring team in Nigeria. “From what we observed, elections have gone on, so far credibly, peacefully and transparently,” said John Kufuor, former president of Ghana and lead AU observer. Photo: Independent National Electoral Commission (INEC) Chairman Attahiru Jega (R) collates electoral figures with a top official of the commission before the announcement of the presidential election results at the INEC headquarters in the capital Abuja, April 18, 2011. Nigeria’s Goodluck Jonathan was officially declared the winner of a presidential election by the head of the INEC on Monday. Picture taken April 18, 2011. REUTERS/News Agency of Nigeria.

Whether or not these elections are free and fair, perceptions of electoral misconduct sparked riots in some northern states, the CPC’s stronghold, killing at least 10 people, injuring hundreds and displacing thousands from their homes. Supporters of both the PDP and CPC have come under attack, and both Jonathan and Buhari have condemned the violence, stressing the crisis was not ethnic or religious.

Nonetheless, it is being portrayed in most international media as the reignition of the historical differences between the Muslim north and the Christian south of the country, particularly given the voting records of the regions – with Jonathan, who is from the south, winning overwhelmingly there (rather too overwhelmingly, the CPC alleges) and Buhari taking the north comfortably. This is perhaps an oversimplification of events. The Nigerian electoral rules state that to avoid a runoff, Jonathan would have had to win not only the majority of votes, but at least 25% of votes in every state. That means that at least a quarter of all voters in every northern state voted for Jonathan and the PDP.

This is an encouraging statistic of national unity, but does not mean the problem will go away. There are ethnic and religious divisions open to exploitation by unscrupulous politicians and there needs to be strong restraint shown by Nigeria’s opposition parties to avoid fanning the flames. Enough people have died already in Nigeria’s most successful election. If the violence continues, all the good work done over the past weeks and months will be undone.

Neither West Africa nor, indeed, Africa can afford another Côte d’Ivoire. Everyone’s best interests lie in accepting the election results and moving on to a future that may be led by Jonathan and the ever-dominant PDP, but where the opposition can play a real role in parliament, for a change. DM

Photo: A signboard of Nigerian President Goodluck Jonathan is seen along a road in Yenegoa, Bayelsa state capital April 18, 2011. Nigeria’s Goodluck Jonathan was officially declared the winner of the presidential election by the head of the Independent National Electoral Commission (INEC) on Monday. REUTERS/Joseph Penney