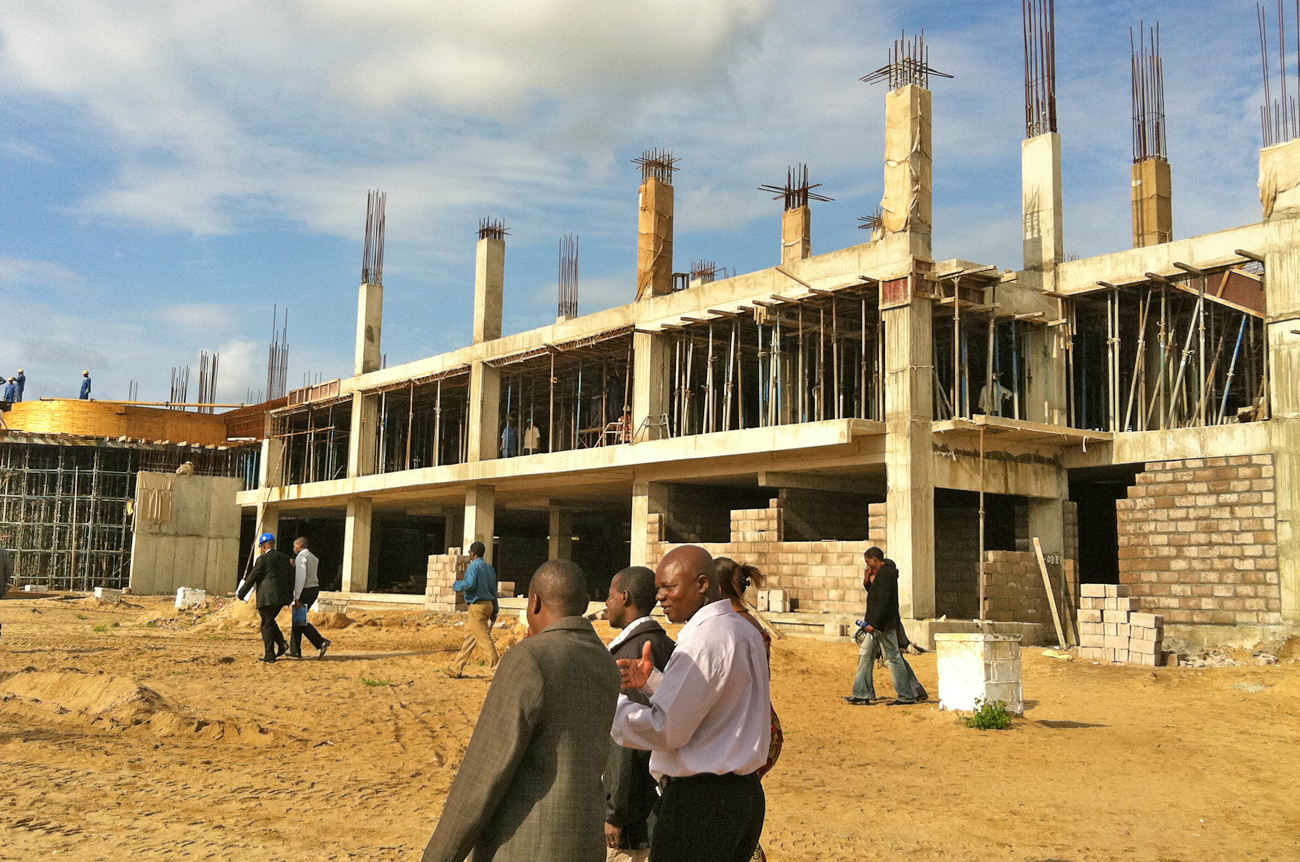 Though the bulk of the Square Kilometre Array will be deep in the radio-silent Karoo, near Carnarvon, it will be linked to no fewer than eight other smaller radio-telescope complexes across southern Africa. ALEX ELISEEV visited the busy construction project in Mozambique.

Our bus coughed and choked like a dying donkey as it carried us through the slums of Mozambique. The roads had been damaged by recent rains and getting through the craters took every ounce of dexterity the old beast could muster. It rattled and cried in pain during gear changes, but pushed on towards Maluana, some 60km from Maputo.

The sights that floated past were all too familiar. Endless rows of shacks, roads covered in filth, landfill dumps where people seem to turn grey, small fires, a man hammering at a broken piece of wall to sell the steel inside, children running on the lips of filthy canals… The smells were the same. It may as well have been Alexandra.

We drove north, leaving behind the squalor and trading it for perfect emptiness. Here, in the rural parts, there are only dusty roads and tall grass. The air hot and humid.

We turned off the main road and bounced along the sand. A few moments later we reached a big construction site, where the early signs of a three-storey building were emerging. Scaffolding hugged the grey structure and builders scurried around, banging their hammers the moment anyone had anything important to say.

We had arrived at the site of the future Science and Technology Park. Almost 1,000ha set aside for classrooms, labs, homes, shops and maybe even a golf course. A brave and bold vision, with the first building already rising.

There were PowerPoint presentations, architectural drawings, walkabouts, a symbolic tree planting and the regular chuckles that echoed with diplomatic politeness. There were politicians and smiling businessmen. And phrases like “hand in hand we are dreaming together”.

A few hundred meters away from the construction site, a small square was drawn in the sand. It was a makeshift diagram of the area where Mozambique’s first radio telescope will stand. Its veins will run into the future buildings and carry knowledge from the dark galaxies above.

Invested both in heart and wallet, South Africa’s minister of science and technology Naledi Pandor, stood before the media and proudly announced: “The next time we come here it’s going to look like Star Wars”. It was a lovely touch. The perfect soundbite. But also a vivid image of the quantum leap some African countries must make to play a meaningful role in global astronomy and, more specifically, in the Square Kilometre Array project. Not to mention the trust which has been put in them.

Mozambique is one of eight partner-countries helping South Africa defeat that other country – with all those bouncing creatures – for a chance to host the SKA. The other seven partners being Namibia, Botswana, Ghana, Kenya, Madagascar, Mauritius and Zambia.

By sharing the bid with its neighbours, South Africa has made it an African project. Plus, the specifications say the array of SKA telescopes should stretch across an area of at least 3,000km. This is done to increase the “collecting bucket”, which in turn delivers better quality of data.

If the multibillion-rand initiative goes South Africa’s way, the partner countries will receive a handful of radio telescopes, while the bulk will be based in South Africa. They will, like the host country, benefit from being a part of the project – both in the realm of science and in a very real economic sense.

Come September, Pandor will submit a full report to the global SKA selection committee. This document will need to convince them the partner countries are on board and are delivering on their promises. This is one of the reasons Pandor spent two days last week in Mozambique.

South Africa’s ability to host a project of this magnitude is not really in question. We have shown the world what we can do. We have the brains and the money. We have already built the MeerKat precursor array in the Karoo – which will be used regardless of which way the committee votes. At the end of the day, the decision between South Africa and Australia is likely to be a tough and technical one.

The question that remains is whether the African partner countries can keep up?

They say they can. Pandor’s Mozambican counterpart, Venancio Massingue believes the SKA project has the potential to change the very shape of the African continent. Powerful words, backed by the bricks being laid in Maluana and a vision of training 6,500 scientist by 2025.

Of course, not all partner countries are rushing out to build science parks and their own astronomy centres. Some, like Ghana, have the option of modifying existing dishes at a fraction of the cost. But each has its own role to play.

Ask the South African team working on the SKA bid and they’ll tell you that the co-operation of the partner countries is crucial. And complicated. So there is much work to be done before the verdict arrives in the middle of next year.

A pessimist could argue those countries are punching above their weight and have bigger problems to worry about than searching the universe for answers to how it all began. He’ll say that Aids, corruption, poverty (that old bus and those broken roads) should be fixed first. While the optimist will declare that dreams are immensely powerful, and technology has the power to change lives.

We’ll be watching. And may the force be with all of us. DM

The Square Kilometre Array will be a cluster of the most powerful radio telescopes in the world. It’s estimated it will take €1.5 billion to build and a further €150 million a per year to operate. The world’s top astronomers will apply for time to use the SKA, and look further into the universe than ever imagined. They will be able to see back in time – before stars and galaxies were formed – and edge closer to answering fundamental questions. Check out www.ska.ac.za for more information.