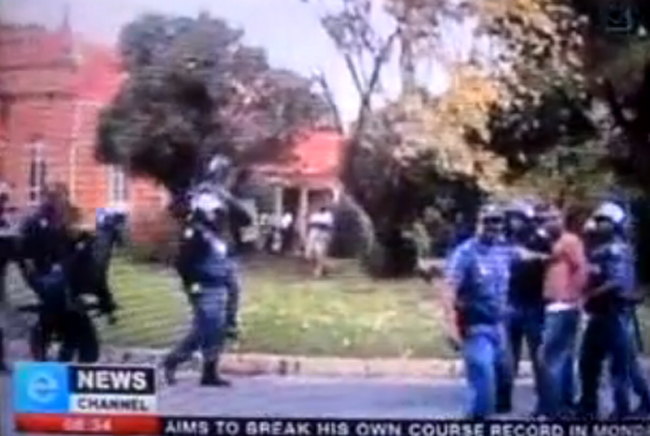 A look into Andries Tatane’s life after his televised death shows him to be a civic-minded person, a nation-builder type and a human being who loved helping others. Tatane died after being beaten and shot, allegedly by police, during a service-delivery protest in Ficksburg. The great tragedy of the police brutality that took Tatane’s life is that it snuffed out the potential of a community activist who dedicated his own life to improving the lives of others. By MANDY DE WAAL.

When Andries Tatane defiantly faced off against police water cannon before he died on Wednesday 13 April 2011, he was doing what he had done for most of his life, helping other people.

“Andries was born and bred in Ficksburg and was very much involved with helping people. Mostly people who didn’t have the means for further education. He cared a lot about other people,” said Lefu Tatane, Andries’ younger brother.

When Tatane’s life ended after being shot and beaten it appears he was trying to get the police to stop using water cannon to disperse protesting crowds, because elderly people were among the protesters. News24 quotes a witness called Mathabo Baatjies who said Tatane was trying to protect the more vulnerable people in the crowd of protesters:

“There was chaos after someone who was inside the municipal offices threw a stone at protesters, who were being addressed after they submitted a memorandum to the municipality. Some people reacted and then police started spraying them with water cannons,” Baatjies told News24 adding that Tatane tried to reason with police, “but they attacked him even though he had held up his hands, showing that he was not fighting.

“They started beating him and he tried to defend himself, but that did not help, and then he was shot. No one heard a shot, but someone said ‘shoot him’. I do not know who shot him, though,” said Baatjies. A community activist, Tatane was the father of two young sons and married to Rose Tatane who witnessed her husband being beaten and shot.

Speaking to Tatane’s brother revealed this slain victim of alleged police brutality was a civic-minded person who loved books, worked actively in his community and was passionate about helping students better themselves. “Andries was always helping people with maths, physics, science and biology. He was a very down-to-earth person who was lovely to go out with. He was very friendly and accessible and always willing to help.”

Lefu said his brother often helped out at Tlotlisong High School in Meqheleng township and had founded an organisation called the “I Can Learn Academy” to assist older students with courses and finding jobs. “Andries helped people to realise their goals and their dreams. When they didn’t know how to get a job or to study further he would help them access information so that they could get to wherever they wanted to go in life.

“Many people came to him for help, and he was very involved in the high school where he often took part-time jobs because he was so active in assisting younger people with their studies. The school would hire him because he was so good in getting the children to prepare well for their exams. He had been working on the I Can Learn Academy for three years when he died. That was his passion, helping other people. That’s what he lived for. That and reading. He loved reading so much and would often spend a lot of time reading,” Lefu said.

When asked how people should commemorate Tatane’s passing, Lefu said: “If people want to commemorate Andries’ life, they must just carry on doing what he did with his. Andries helped other people and made a difference to people by caring for them and by doing things that changed their lives. If people want to make a difference they need to do what he did. That is to care for and help other people.”

Andries Tatane’s death focused national attention on the issue of police brutality and the severe lack of service delivery in Ficksburg. Media reports show basic service delivery has all but broken down in the Free State town, and that for many in Meqheleng life is a daily struggle trying to cope..

The report says people wait in long queues to get water and often have to carry 20litre cans of water on their heads or in wheelbarrows over long distances. Municipal service failures include not maintaining the town’s streets, problems with refuse collection and sewerage alongside the water provision problems. A thorn in the town’s side is the obvious largesse of local municipal management who drive luxury cars and eat at top restaurants while local community members suffer.

Andries Tatane’s death is not an isolated incident of brutality, but is the terrifying tip of a spike in the level of police violence being used against service-delivery protesters, says the Centre for the Study of Violence and Reconciliation. “Not only does this incident reaffirm evidence of an emerging pattern of brutality by police in responding to service-delivery demonstrations, but it comes at a time when the number of killings and serious non-fatal assaults by police are at extremely high levels,” read a statement from the CSVR in reaction to Tatane’s death. “While it is important that the incident be investigated, it should not be dealt with as an isolated incident but as a manifestation of a systemic problem.”

A report by The Sunday Tribune in March 2011 said the rising tide of police brutality meant the Independent Complaints Directorate – which investigates complaints of criminality and misconduct against the police – is now investigating three times more assault cases than it did in 2001. The paper cited ICD research which showed the directorate’s investigations into assault had trebled from 255 in 2001/02 to 920 in 2009/10.

The ICD is investigating Tatane’s case, but the Social Justice Coalition warns the chances of a successful prosecution are slim. “In 2008/9, the ICD received 378 reports of common assault, 828 of assault with intent to do grievous bodily harm and 372 of attempted murder. Of these, only six of each resulted in successful prosecutions – percentages of 1.58, 0.72 and 1.61 respectively. While there are no doubt examples where the police were innocent of wrongdoing, these numbers seem heavily skewed.”

Photo: A grab from eNews.