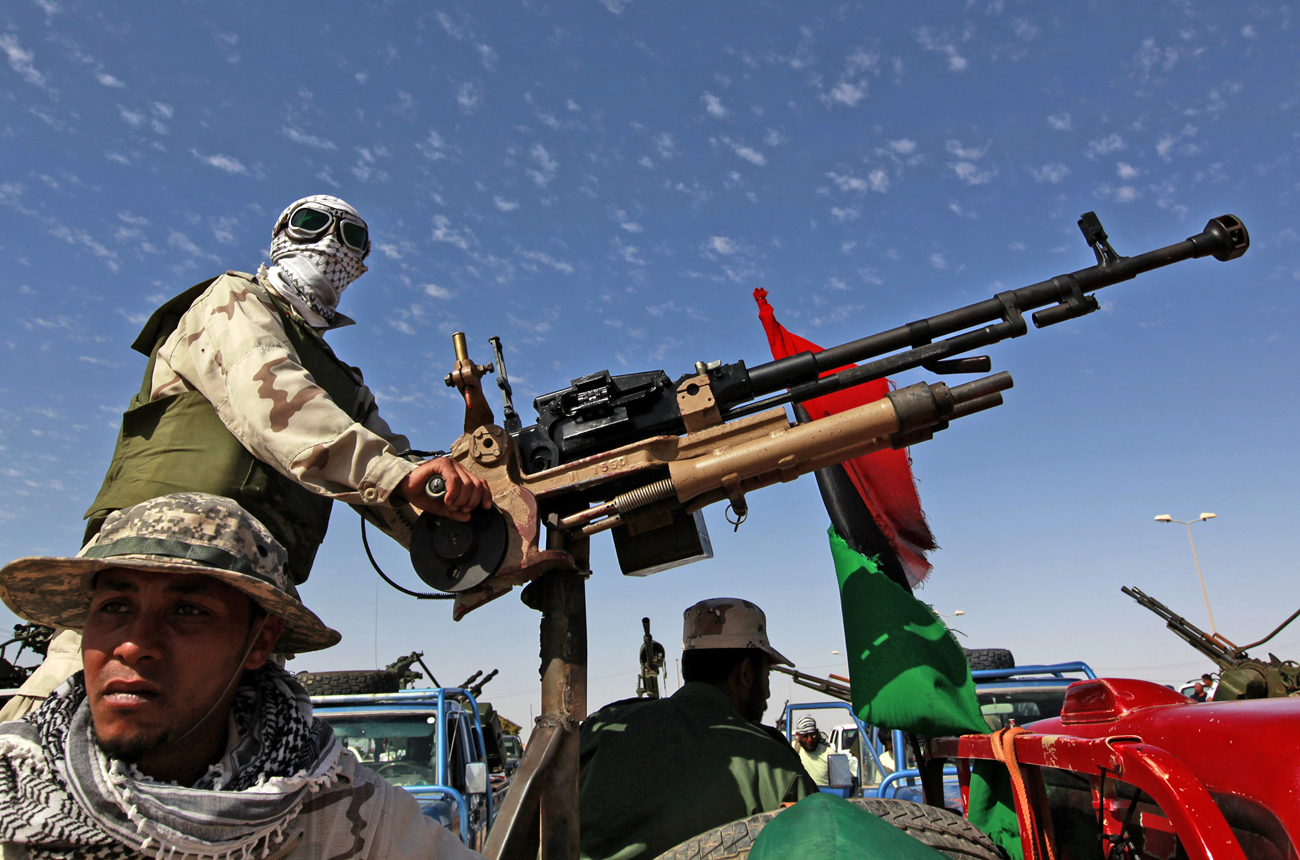 On Friday morning, the Libyan National Transitional Council sent an urgent Note Verbale to South Africa’s department of international relations, and “all Diplomatic Missions and International Organisations accredited to the Republic of South Africa”. The communiqué informs of the coming “massacre” in the rebel holdout of Misurata, where forces loyal to Gaddafi are undertaking an offensive push. It is a plea for help. Will anyone read it and, if so, will they care? By RICHARD POPLAK.

You just can’t make this stuff up. Even by the standards of an already mad, mad world, the world has gone crazy. In early January, Hosni Mubarak was comfortably plundering Egypt, gently backed by his American, European and Israeli allies. Shiites were sullenly driving taxis in Bahrain, keeping their complaints to themselves. Tunisia was somewhere in the north of Africa, or maybe South America—no one was quite sure, least of all Tunisians. And the pragmatic, Cold War status quo of backing murderous dictators for energy security, including the newly repentant leader of The Great Socialist People’s Libyan Arab Jamahiriya, went largely unquestioned.

Now, all of that has changed. The old morality, which really wasn’t morality at all, has crumbled. US President Barack Obama tentatively backed Mubarak as the people of Egypt took to the streets and died in numbers, risking everything for the very tenets Obama had two years previously sworn to uphold during his emotional inauguration. Then he removed that backing, kind of. He’s fine with the Kingdom of Bahrain roughing up its people, because he has some important real estate there. But he is resolutely not okay with Muammar Gaddafi doing the killing of his own, probably because of oil, or maybe because of some of the other esoteric notions that he’s mentioned in a couple of speeches.

Indeed, international statecraft is at an all-time nadir. I mention Obama, only because he is depicted in the coolest posters. Nicholas Sarkozy, David Cameron, Benjamin Netanyahu, Hu Jintao—the list goes on. There are no good guys, just gradations of bad. This isn’t moral relativism—believe The Daily Maverick when we say we miss the days when relativism was a possibility, regardless of its low intellectual pedigree. Our very own Jacob Zuma, President of South Africa and leader of the African National Congress, barely two decades removed from being a banned organisation, has been, in his own fashion, one of the quietest of the major minor players. The middle way, now a winding switchback up a mountain that leads into impenetrable mist, is the preferred Zuma trajectory. He has set himself up as an international moderate, which really means that no one knows what he wants. Zuma could tomorrow feed every last child in Africa, or napalm a kindergarten in Mozambique, and there isn’t a soul that would be surprised either way.

In this new world, where there are no guidelines, no goalposts and no morals, comes the National Transitional Council (NTC) of Libya. Who or what is/are the NTC? Wouldn’t you like to know? In the official narrative, they are the good guys, the guys who are taking a licking for democracy, the guys battling the bad guys street by bloody North African street. In less official narratives, they are a cobbled-together arrangement of tribal alliances sure to implode if and when the Gaddafi government falls, the dissolution of which will allow fundamentalist elements, all of whom make The Colonel look like a Disney character by comparison, gain a foothold in the Maghreb.

Regardless of what you chose to believe, the NTC’s impassioned plea holds some unavoidable truths. The following is worth reading in full: “The NTC would like to bring to the attention of the international community that the Gaddafi regime is accelerating attacks on Misurata, using sophisticated weapons including GRAD missiles, with the aim of breaching the city and massacring its civilians including women, children and the elderly. The mass killings have begun this morning. The Council sends this appeal to the international community to assume its responsibilities, and move urgently to stop the anticipated massacre of men, women and children. The NTC is calling on the international community to use all necessary measures to ensure the implementation of UNSCR 1973 to protect civilians, by declaring Misurata an internationally protected zone, and insist on delivering medical and humanitarian aid to the people of Misurata who are subject to continuous indiscriminate shelling.”

That’s highly unpleasant news. But the NTC is barking up the wrong tree by faxing this off to South Africa. For one thing, there are civilians being killed in the Ivory Coast, Syria, Yemen and so on. It’s peak season for civilian slaughter. For another, insofar as Zuma and his administration do have a policy, it is about upholding “sovereignty”. This is in line with Zuma’s new friends in BRICS, a cohort of up-and-coming mittel-way economic superpowers, including Brazil, Russia, India and China. BRICS is cute in the way it pretends to suggest that it has an alternative international policy to the West, when in fact its international policy is identical—that is, the preservation of self-interest.

Here’s what this new coalition of drinking buddies had to say about the likes of the NTC and its pleas for intervention: “We are deeply concerned with the turbulence in the Middle East, the North African and West African regions and sincerely wish that the countries affected achieve peace, stability, prosperity and progress and enjoy their due standing and dignity in the world according to legitimate aspirations of their peoples. We share the principle that the use of force should be avoided. We maintain that the independence, sovereignty, unity and territorial integrity of each nation should be respected.”

No doubt. And maybe they have a point. One thing is certain, that the “legitimate aspirations” of their own peoples don’t always fall in line with government policy. But you can’t really knock them for the above guff no more than you can the other guy. It’s a mad, mad world gone crazy. The only thing to do is to pray that the children of Misurata make it through the night and have a chance to exercise those “legitimate aspirations” with all their limbs intact. And to hang on to one’s own morality, and sense of outrage, while the guys in the posters try to prove that Hope and Change are merely advertising buzzwords and not legitimate aspirations at all. DM

Photo: A rebel fighter mans an anti-aircraft machine gun atop a pick-up truck as he scans the sky for NATO planes over the front-line along the western entrance of Ajdabiyah April 14, 2011. REUTERS/Yannis Behrakis.