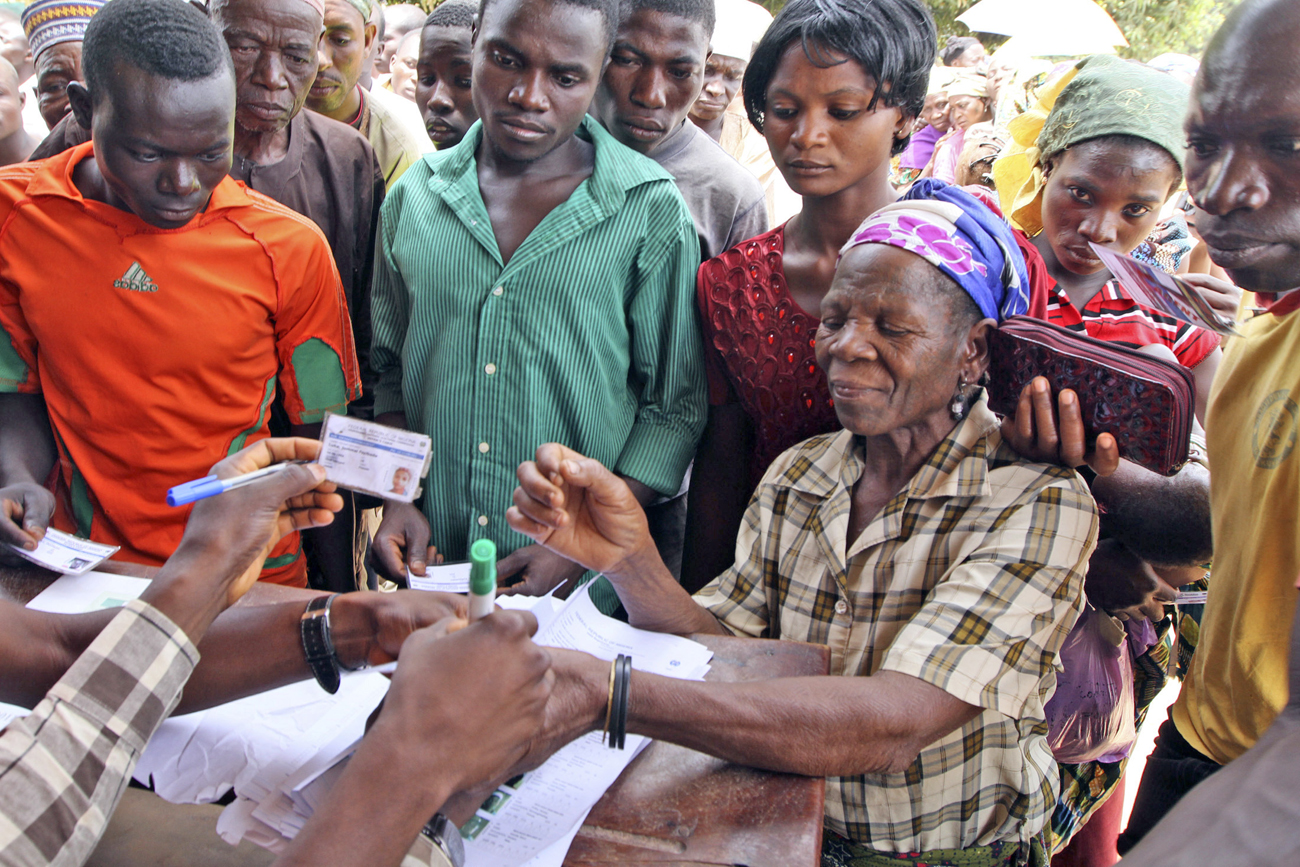 “The trouble with Nigeria is simply and squarely a failure of their leadership,” wrote Chinua Achebe, 27 years ago. Nigeria still hasn’t solved that problem, but Saturday’s presidential elections – which will be the largest elections ever held in Africa, with an astonishing 73.5 million people on the country’s electoral roll – are seen by many as a step in the right direction. By SIMON ALLISON.

The incumbent President, Goodluck Jonathan – the man with the best name and the best hat in African politics – remains the favourite to take the majority of the vote. Jonathan’s party, the People’s Democratic Party (PDP), has won every election since the end of military rule in 1999, and most by a considerable margin. It is the only party with genuine national appeal, the other parties all having strong regional bases and generally performing poorly outside these geographical areas.

Jonathan, of course, was never meant to be running for president this time round. That honour should have gone to Umaru Yar Adua, the man who won the last elections for the PDP. His strange and protracted death last year, which involved a long medical convalescence in Saudi Arabia (an indictment of his party’s healthcare policies, if one was needed) and a mysterious return to Nigeria during which no one knew if he was actually alive, ruled him out of these elections.

Yar Adua’s death allowed Jonathan, his vice-president, to assume power, but not without controversy. Jonathan hails from Bayelsa State in the Delta region, which makes him a Southerner in Nigeria’s North-South geographical divide, and a Christian in Nigeria’s Christian-Muslim religious divide. This was unfortunate, as it wasn’t a Southerner’s turn to be president; an unwritten but very strict PDP policy, and part of its national appeal, is to rotate the presidency between Northerners and Southerners, with each getting two terms at a time.

Blithely ignoring protocol, much to the consternation of the old PDP hands who predicted the death of the party and a swift descent into civil war, Jonathan got on with the business of governing. His most important contribution has been to appoint a well-respected academic as head of Nigeria’s independent electoral commission, who in six busy months has revamped the electoral roll and instituted wide-ranging voting reforms. And so far, so good – despite two delays, an estimated 100 deaths in election-related violence and the seizure of a million fake ballot papers, the elections have been hailed as Nigeria’s best yet.

Results are already in for the national assembly elections, and while the PDP retains its majority, as expected, it has suffered significant losses to opposition parties, and will find it more difficult to force through legislation in the next term. Nonetheless, it seems unlikely that these setbacks will affect Goodluck Jonathan’s bid for re-election; the presidentials are seen as quite distinct from the parliamentary elections, and he has run a very slick campaign, incorporating many of the techniques which made Barack Obama’s campaign so effective, including harnessing the power of social media. His Facebook page is the world’s second most popular for a politician – after, naturally, Obama himself – and is a masterpiece in informal political communication.

But leading opposition figures are not giving up hope. The two main opposition parties – the Congress for Progressive Change (CPC), strong in the north,  and the Action Congress of Nigeria (ACN), strong in parts of the south – have been locked in talks about presenting a unity candidate which would prevent the opposition vote from being split. These talks faltered at the last minute due to the refusal of the CPC to guarantee the vice-presidency to the ACN.

However, in the best-case scenario for the opposition, these parties will still be thrown together if Jonathan fails to win enough votes to prevent a run-off election. The electoral rules state that to win outright, a candidate must secure a majority of votes overall, as well as at least 25% of votes in each of Nigeria’s 36 states and Abuja, the federal capital territory. Otherwise, there will be a runoff against the candidate with the second highest number of votes, which is likely to be the CPC’s Muhamadu Buhari. This is the PDP’s worst fear, because it will allow the opposition to unite against them, providing a very serious threat to Jonathan’s bid; they will be hoping to put the election to bed in the first round.

Should the elections proceed smoothly, or relatively so, they will be a sign that Nigeria, home to more than 10% of Africa’s population and the economic engine of West Africa, is maturing as a democracy and finding a little political stability. Hopefully this will translate materially as more jobs, better development indicators and increased infrastructure. Unless, of course, things fall apart – Nigeria has proved itself capable time and time again of squandering promising opportunities. The issue of Jonathan’s southernness has not been adequately resolved, and may well count against him in the elections, or in his ability to govern effectively afterward. There is also the possibility of more election violence, particularly from extremist Muslim groups in the north and from the Movement for the Emancipation of the Niger Delta (MEND) militia in the southern Delta region.

On the whole though the prognosis is good, both for the elections and for Nigeria’s future – with or without a little bit of Goodluck. DM

Photo: A woman’s thumb is marked after verifying that she has a voter’s card during parliamentary elections in Suleja, Niger state April 9, 2011. An explosion hit a polling booth in a neighbourhood of the northeast Nigerian city of Maiduguri during a parliamentary election on Saturday, an emergency official said. REUTERS/Afolabi Sotunde.