'Decadence': Funny decades ago, these days, not so much

‘Decadence’: Funny decades ago, these days, not so much 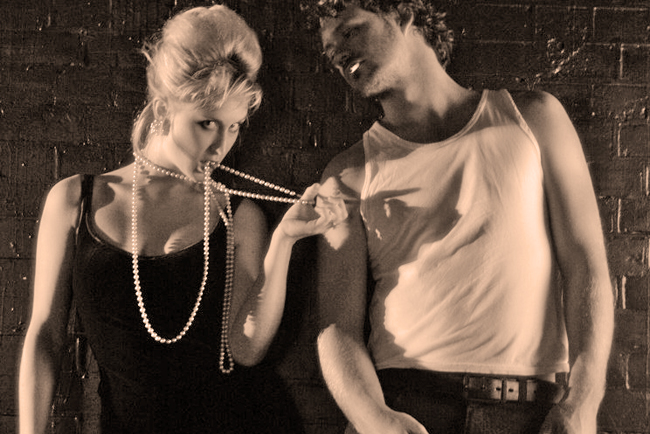 I’m all for a bit of decadence, so a night at the theatre promising sex, temptation, indulgence and extravagance sounded like a delightfully insalubrious evening. Yet I felt strangely out of synch with most of the audience as they laughed, gasped and applauded as “Decadence” made its comeback. By LESLEY STONES.

The script by British playwright Steven Berkoff is all in rhyming couplets, giving it a Shakespearean feel. It has the Shakespearean bawdiness too, but taken to extremes as two couples live out their fantasies and fetishes on stage.

Actually there’s only one couple, but actors Scott Sparrow and Emily Child switch between roles to play an upper class toff and his mistress, and his scummy wife and the private dick she hires to catch him out. Both couples are at it like rabbits and in between they recount tales of sexual encounters with boarding school masters, room service waiters and anybody else who happened to be passing.

Please tell me I’m not becoming a prude. But I couldn’t get beyond a niggling annoyance with the actors for their dreadfully fake English accents. And in a play as verbally intense and character-driven as this, not believing in those characters is an enormous drawback. Child’s voice was particularly grating throughout as the upmarket mistress and downmarket missus played their parts, with some of the words lost in poor enunciation. The script is stuffed with gratuitous vulgarity for the sake of shocking. That must have worked brilliantly when it was written 30 years ago, but such language has lost its novelty value now that every school kid talks that way.

To be fair, the acting is good, the timing is almost flawless and Child and Sparrow are word perfect in their long and demanding roles. Director Christopher Weare brings in some nice touches with their movements on and around a stage where a solitary settee is the only prop.

“Decadence” is billed as a biting commentary on British society, exploring relationships with the opposite sex, with racism, with food and drink and lashings of cash. If it’s there to be consumed, they consume it; if it’s a form of indulgence, they’ll overindulge. It’s part commentary-part comedy, with a script that in the hands of these two actors is more cynical than amusing.

The funniest scene is where the upper class twits re-enact a hunt, with Sparrow playing the horse and Child the highly aroused rider. That’s great physical theatre, but for me the rest of the play failed to reach my funny bone or tickle my fancy. DM

“Decadence” runs at The Old Mutual Theatre on the Square until 30 April.