Activists arrested as Swaziland gears up for 12 April uprising 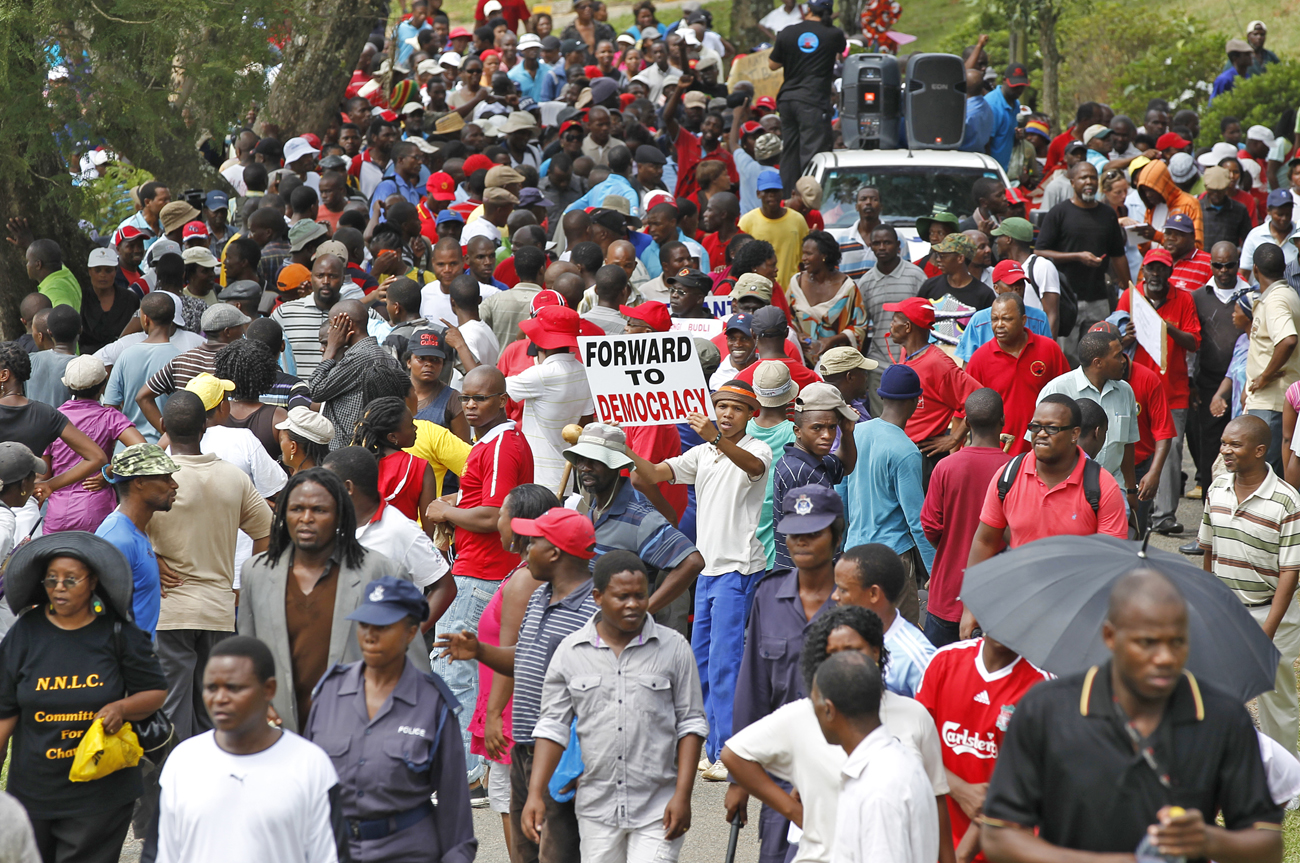 Swaziland has turned into a mini-war-zone as police armed to the teeth parade the streets in a public display of military might. Soldiers have been occupying strategic areas, while roadblocks have been mounted across the country in preparation for the planned uprising on Tuesday. Several activists have been arrested, and the Swazi Labour Federation headquarters has been surrounded by police. By MANQOBA NXUMALO.

Trade unions, political parties and civil society organisations are planning a protest action on Tuesday to demand the unbanning of political parties and the removal of Prime Minister Sibusiso Dlamini and his cabinet. April 12 has been targeted for the protests because it was the day in 1973 that King Mswati III’s father, King Sobhuza II, banned political parties and began his absolute monarchy. A Facebook group called “The April 12 Swazi uprising” has also called for protests to demand Mswati hand over power to the people.

This planned uprising comes as Swaziland is in financial crisis following a drastic drop in revenue from the South African Customs Union and has seen the government running cap-in-hand to different organisations. On Monday it was reported in the local papers that the International Monetary Fund had agreed to give Swaziland a letter of comfort, which would help the country secure money from the African Development Bank.

Police commissioner Isaac Magagula warned unions that any demonstration in Swaziland on 12 April will be met with brute force because it would be illegal. He warned unionists and journalists not to attend the planned protests as police would ensure they did not kick off.

However, secretary of the Labour Coordinating Council, Muzi Mhlanga, defiantly told the government the protest actions would go ahead. He said they would demonstrate in Manzini, as well as conduct marches in all towns in the country. In a move reminiscent of the Egyptian revolution, Mhlanga said the protesters planned to sleep in the streets of Manzini until their demands were met. “Anyone coming to the protest must bring something to use at night because we will sleep in town until our demands are met,” Mhlanga said.

The government has been at pains to persuade labour unions not to stage protests on 12 April, but has been unsuccessful. Last week a team commissioned by Mswati to meet unions failed to have the date changed. Following their failed meeting, the prime minister issued a statement declaring the marches illegal.

As an air of uncertainty continues to engulf the tiny land-locked kingdom, some prominent students and youth leaders have disappeared. Maxwell Dlamini, president of the Swaziland National Union of Students, Simanga Ginindza, deputy secretary of both the Swaziland United Democratic Front and SNUS, Sifiso Mabuza, Swaziland Youth Congress deputy president and Themba Mabuza disappeared on Sunday while on their way back from Witbank where they had gone to plan the protests. The four activists were interviewed 20 minutes before their disappearance at the Oshoek border post. Dlamini, a 21-year-old commerce student at the University of Swaziland, has been vocal in open support of the planned uprising.

Swayoco secretary-general Justice Dlamini confirmed the four activists were missing and the organisation has dispatched its lawyers to find them. He said Swayoco was also trying to alert Amnesty International of the fast-changing situation in Swaziland, particularly as it relates to the safety of the organisation’s members.

The home of long-time People’s United Democratic activist Mphandlana Shongwe was raided early on Monday by armed police. “They came to my house early in the morning and said they were looking for guns,” Shongwe said in an interview. Swayoco organising secretary, Mxolisi Ngcamphala, revealed that the homes of its members had been raided and claimed some members had been tortured.

The secretary-general of the banned youth organisation condemned the harassment of its members and said this would not dampen their spirits. “We are not intimidated. We are not shaken. We want democracy and we will fight for it,” said Dlamini, a teacher. The Swaziland Solidarity Network has already condemned the abduction and harassment of Swayoco members. “Swazis are urged to continue with their task and keep their eyes on the ball regardless of who gets arrested next. These arrests are meant to be distractions. Everything continues tomorrow as planned,” spokesman Lucky Lukhele said in a statement. Police public relations officer superintendent Wendy Hleta was not available for comment.

The latest blow to Swayoco has been the arrest of its former leader Wandile Dludlu. On Monday afternoon, there were police officers monitoring every movement of the student leaders and news came through from Pudemo president Mario Masuku that former Swayoco president was being held hostage in one of the union offices as more than 20 police officers wanted to arrest him. He was eventually arrested early in the evening.

An anonymous associate said: “It is very tense today. There are lots of police in towns, streets, roads and other hotspots. While the people feel intimidated by the presence of police, they are also happy that for the very first time they have the courage to challenge Mswati and his corrupt government. April 12 is dominating discussion in public places.”

In the latest development on Monday evening police surrounded the Swaziland Federation of Labour headquarters in an effort to prevent activists from leaving the offices ahead of Tuesday’s protest. This move was condemned in the strongest terms by the Swaziland Democracy Campaign in South Africa.

Meanwhile, trade union federation Cosatu is going ahead with its planned solidarity march at the Oshoek border post on Tuesday. An SDC press release stated: “Cosatu will also be issuing a call for the South African government and its SADC counterparts to heed the call of the long-suffering people of Swaziland, to further pressurise the regime and open up opportunities for democratic rule to take root and flourish. We firmly believe that our continent will never be free while even a small part remains under despotic rule.”

Even though the Swazi government has littered the towns with armed personnel, it is rather obvious the planned protests have ruffled the country’s rulers, and students and the youth are getting more defiant by the day – despite the Internet being down, and Facebook inaccessible for part of Monday. As the state continues to crack down on democratic activists, it has become clear that Swaziland will never be the same again after April 12 – whatever happens during the protests. DM

UPDATE: EWN reporter Nastasya Tay was arrested in Swaziland early Tuesday morning. Neither the reason nor her whereabouts could immediately be established.

UPDATE: EWN reporters Nastaya Tay and Tshepo Lesole have now been released and are safe. Their conditions of release are as yet unknown.

Photo: Protesters take part in a march in Mbabane, the Swaziland capital, March 18, 2011. Thousands of Swazis marched on the prime minister’s office in a rare protest to demand the resignation of the tiny southern African kingdom’s government. Swaziland is in the grip of a serious financial crisis and civil servants fear they will not be paid this month after Africa’s last absolute monarchy suffered a huge drop in income from the Southern African Customs Union. REUTERS/Siphiwe Sibeko.