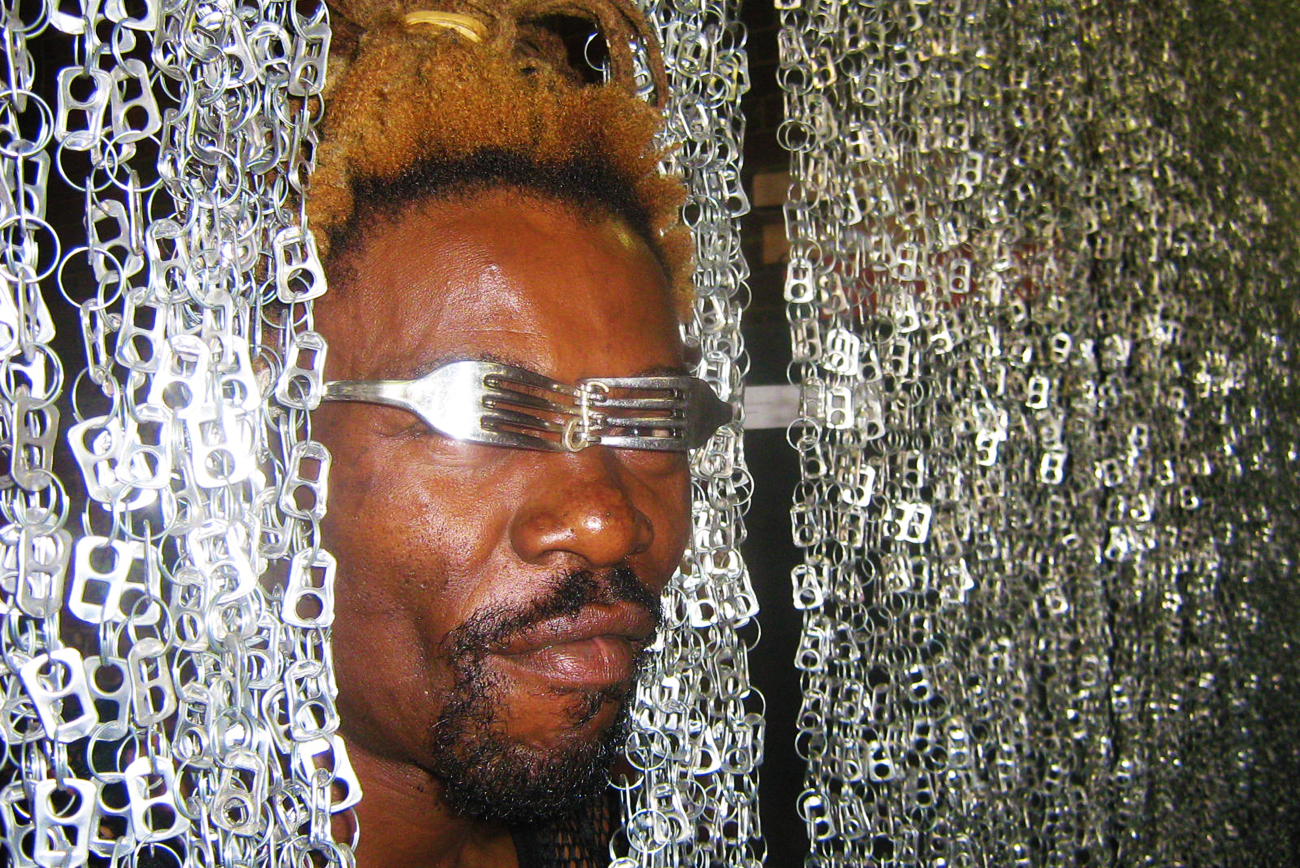 Before Newtown became the place to see and be seen, long before the mlungus started drinking coffee at Kaldis, and Sophiatown became the place to cut deals, an eccentric artist started winning the love of people he’d meet on those inner city streets. For those who don’t know him, this is the story of Prince of Newtown. By MANDY DE WAAL

Prince of Newtown’s distinctive drawl is as instantly recognisable as his look. That clump of peroxide-yellowed dreads tied into an eccentric headpiece and those intense brown eyes looking out of a face marked by the scars of inner-city survival. Fashionable sheer T, too big trousers pinched into to his waist with a belt and a range of silver rings climbing up his hands and arms, Prince is a well-recognised style icon on Jozi’s city streets.

“People know me,” says Prince. “They just know me as Prince of Newtown because I have been here for so many years. I was working first at Kippies and then at Shivava as a waiter, but I have been here for over 15 years in Newtown. I was here before all the changes, and at that time when I was worried that they were going to kill the beauty of this place.” Born and bred in Alex, Prince’s real home are the streets of that cultural hub once called Burghersdorp.

Anyone who knows and loves Johannesburg’s Newtown, will know Prince  – as much a living landmark as the Market Theatre where the eclectic fashion icon has spent years on the street making and selling jewellery. His new home now is off the streets at Unity Gallery, which forms part of the Bus Factory in Newtown’s cultural precinct. It’s there the spoons, forks and teaspoons Prince reshapes, and remakes into rings, necklaces and armbands are finding favour with international tourists who are beginning to take them all over the world.

Watch Prince of Newtown fashion jewellery out of a fork:

“When I was a punk with my boys living in Yeoville, I would go out with my friends and fold forks around my arms. People used to see this, got to know me, and got to love what I was doing and would want to buy this jewellery from me. From there I started making rings with spoons and cake forks.” A couple of forks and spoons, wrapped around Prince of Newtown’s arms and fingers, have mushroomed into a veritable enterprise. These days there’s quite the demand for Prince’s jewellery and he spends a lot of time trawling through pawn shops, charity shops and friend’s cutlery drawers in search of the raw material to create his pieces. You’ll find Prince spending as much time in Newtown as he does in obscure shops in Orange Grove and Norwood digging around for old spoons and forks.

What’s remarkable about Prince’s utensils-as-wearable-art is that they’re made from rust-resistant nickel silver or pure silver, or that they are spoons with a discerning fluted form. Most have a hallmark – an insignia stamped into the back of the piece of cutlery that shows what silver has been used, when the implement was made, and what town it was made in. These are abandoned vintage that Prince takes to turn prongs into swirls and function into form so tools people once ate with become idiosyncratic adornments worn around necks, fingers and arms.

“For the first time I have pieces that are going overseas. Some with a writer to Paris, a painter in London and some pieces are finding their way to the east.” Prince hopes that this initial offshore interest will spark a more steady flow to lucrative global markets. Following the Soccer World Cup there’s a steady flow of tourists who pass through Newtown, and go through the Bus Factory which means Prince’s work is getting exposed to a more cosmopolitan audience. Prince is an original in the cultural precinct and one of the first to make the area his own before it got its inner city cool. When the area was still derelict he was one of the artists who helped create the cultural identity and diverse aesthetic vibe it has today. Because he’s one of Newtown’s populist aristocracy, the styling fashion designer, jewellery maker and cultural activist early on earned the nick name of “Prince of the precinct”. Nowadays he is known as Prince Twala, Prince of Newtown or just Prince.

This makes sense given that Prince is treated a little like royalty in his home town. People flock to him as he walks around Newtown, they stop to chat with him, buy his jewellery, hand him antique bits of cutlery, or call him into a neighbourhood restaurant to offer him some food or refreshments.

More importantly, Prince is being seen as not just another “street artist”, but as a credible cultural icon that has helped make Newtown what it is. This growing acknowledgement and credibility have enabled Prince to move from survival on the streets, to making a reasonable living – with his pieces fetching prices from a few hundred rand to more than a thousand rand at Unity Gallery. DM