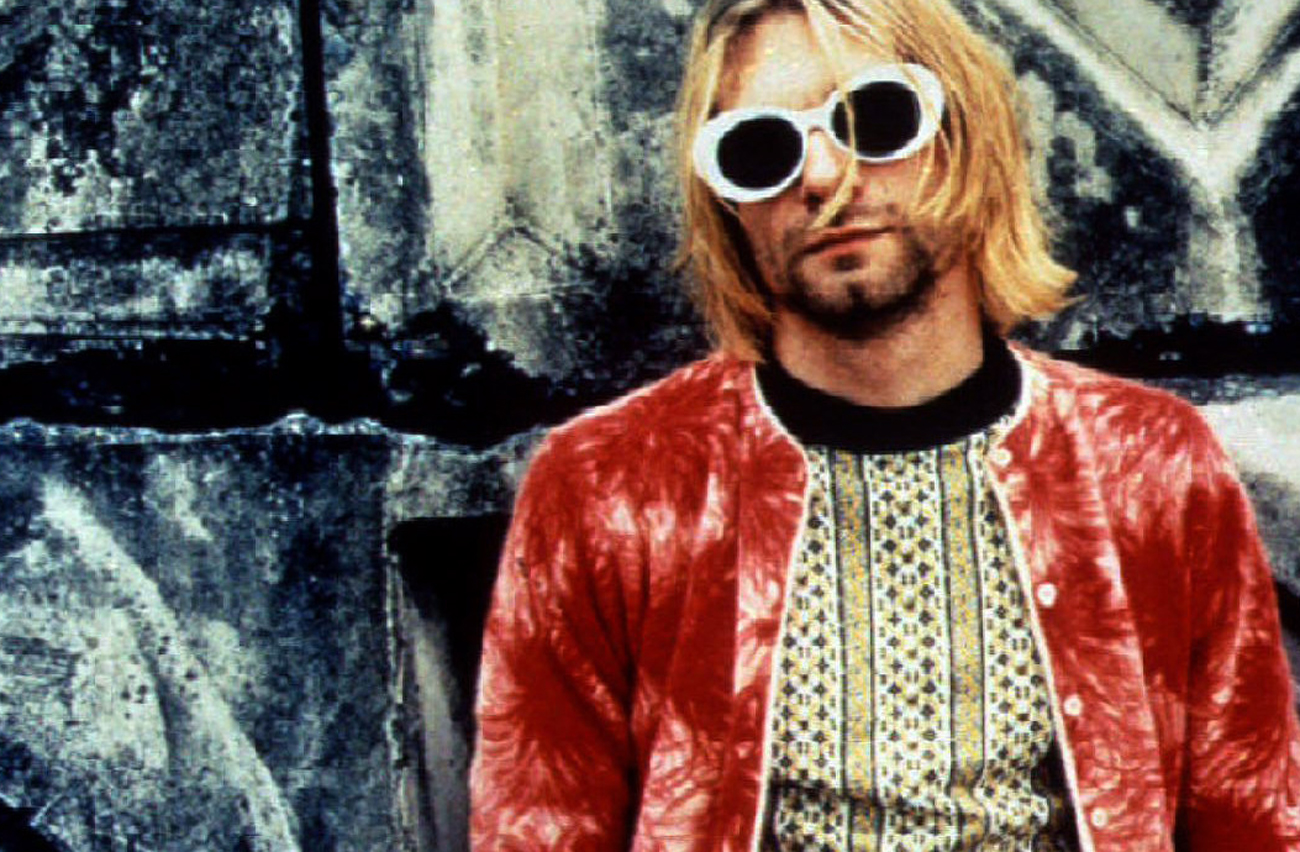 On 5 April 1994, Nirvana front-man Kurt Cobain killed himself with a 20-gauge shotgun. He predicted he’d do it, saying that one day he’d go out just like Jimi Hendrix. Seventeen years after his death, a memorial was erected in his hometown, with global media celebrating his legacy. But how similar to Hendrix was he? By KEVIN BLOOM.

“I’m gonna be a superstar musician, kill myself and go out in a flame of glory, just like Jimi Hendrix.” So said Kurt Cobain in the years before the world knew who he was. The only thing Cobain may have gotten wrong in that prophetic expression of his own destiny was the implied presumption that the greatest electric guitarist of the modern era died at his own hand – the doctor on the scene ruled that Hendrix asphyxiated in his vomit, and in 2009 a book came out that argued for murder. But whatever the cause of Hendrix’s death (given that his girlfriend testified he’d swallowed nine super-strength sleeping pills, suicide can’t entirely be ruled out), the parallels between the two artists are uncanny. Both played guitar left-handed, both hailed from northern Washington State, both lit a fire under the music industry’s ass while fronting hard rock trios, and both left this world at the age of 27.

Most significantly, like Hendrix, Cobain’s impact would loom even larger in death than it had in life. Where Hendrix taught (or re-taught) the maxim that “form” is the real arbiter of great music – his interpretation of the US national anthem being the primary example – Cobain taught (or, again, re-taught) the critical element of musical authenticity. If anything, the key difference between the two lay in the era each hailed from: Hendrix, who was a contemporary of Miles Davis, Bob Dylan and Jimmy Page, was easily the luckier here, which may be why his legacy is considered more inspirational. Cobain, who rose to prominence in the early ‘90s, a time when cynical record label execs placed their faith and their cash in vacuous mass-produced pop, basically had to “shock” his audience into listening. The people he played for were not only anti-establishment, they were disenchanted and angst-ridden, and his singular achievement was that he raised this generation of slackers from the couch. It’s all summed up in the most memorable line from his most memorable song: “Here we are now, entertain us.”

It’s a matter of debate whether Cobain killed himself on 5 April or 6 April 1994; the county medical examiner determined the time of death as the afternoon of the 5th, while the police report claims that two people spoke to him on the 6th. Either way, yesterday was celebrated as the official anniversary – and oddly, since it was the 17th year since his passing, it appears to have been the biggest. A 3.9-metre high statue of a guitar, created by local artist Lora Malakoff, was unveiled in Cobain’s hometown of Aberdeen, Washington. Attached to the concrete guitar is a steel ribbon, with lyrics from the Nirvana track “On a Plain”: “One more special message to go and then I’m done and I can go home.” The site of the statue, said Malakoff, is significant – it lies nears the Young Street Bridge, mentioned in the song “Something in the Way,” where the musician often sought sanctuary to write lyrics.

Also on Tuesday, Rolling Stone online republished its feature from the magazine’s 2 June, 1994, issue – the cover of that issue, reflecting in typical Rolling Stone tradition that a legend had just died, contained no additional barkers or references; just a three-quarter black-and-white portrait of the artist’s face, and the epitaph: “Kurt Cobain 1967-1994”. Written by contributing editor Neil Strauss – who would later ghostwrite porn star Jenna Jameson’s memoirs, and become an international bestseller with The Game, a book about pick-up artistry – the piece starts as a straight-up reportorial investigation into the exact circumstances surrounding Cobain’s death, and ends pretty much the same way. What Strauss does include in the final paragraphs, however, is the bizarre narrative of what happened after the body was found.

“The news of Cobain’s death was first reported on Seattle’s KXRX-FM,” Strauss notes. “A co-worker of Gary Smith, the electrician who found Cobain’s body, called the station with what he claimed was the ‘scoop of the century,’ adding, ‘you’re going to owe me a lot of concert tickets for this one.’

“‘Broadcasting this information was kind of an eerie decision to make,’ says Marty Reimer, the on-air personality who took the call. ‘We’re not a news station.’ Cobain’s sister, Kim, first heard of her brother’s death through radio reports, as did his mother, Wendy O’Connor. ‘Now he’s gone and joined that stupid club,’ O’Connor said to a reporter, referring to Jimi Hendrix, Janis Joplin, Brian Jones and Jim Morrison. ‘I told him not to join that stupid club.’”

The “stupid club,” of course, is the list of rock legends that died at the age of 27. Of the five, only Cobain’s confirmed cause of death is suicide – he shot himself in the head with a 20-gauge shotgun; the others are all officially assigned to the category of drug and/or alcohol overdose. And while Cobain’s autopsy revealed high concentrations of heroin in his body, what sets him apart, aside from the shotgun wound, is the suicide note. The last passage of the note reads: “Thank you all from the pit of my burning, nauseous stomach for your letters and concern during the past years. I’m too much of an erratic, moody baby! I don’t have the passion anymore, and so remember, it’s better to burn out than to fade away.”

He may as well have written that last phrase – cliché though it is – for every member of his infamous club, but if he was speaking for anyone of the other four, it was for Hendrix. DM

Photo: Kurt Cobain, lead singer of the “grunge” rock group “Nirvana,” was found dead in his home, apparently having committed suicide according to Seattle police. Cobain’s body was found by an electrician as he was doing repairs at the singers home. Cobain is shown in a file photo with “Nirvana” members Kris Novoselic (L) and David Grohl.