Here\'s an illustration. Our role is to defend democracy. You don\'t need to read the news every day but we do need to report on it.

If you value the work we do (and we have a sneaky suspicion you do because you\'re here reading it) then help us continue our work by becoming a Maverick Insider member.

Swazis plan to emulate Tunisia and Egypt on 12 April

Swazis plan to emulate Tunisia and Egypt on 12 April 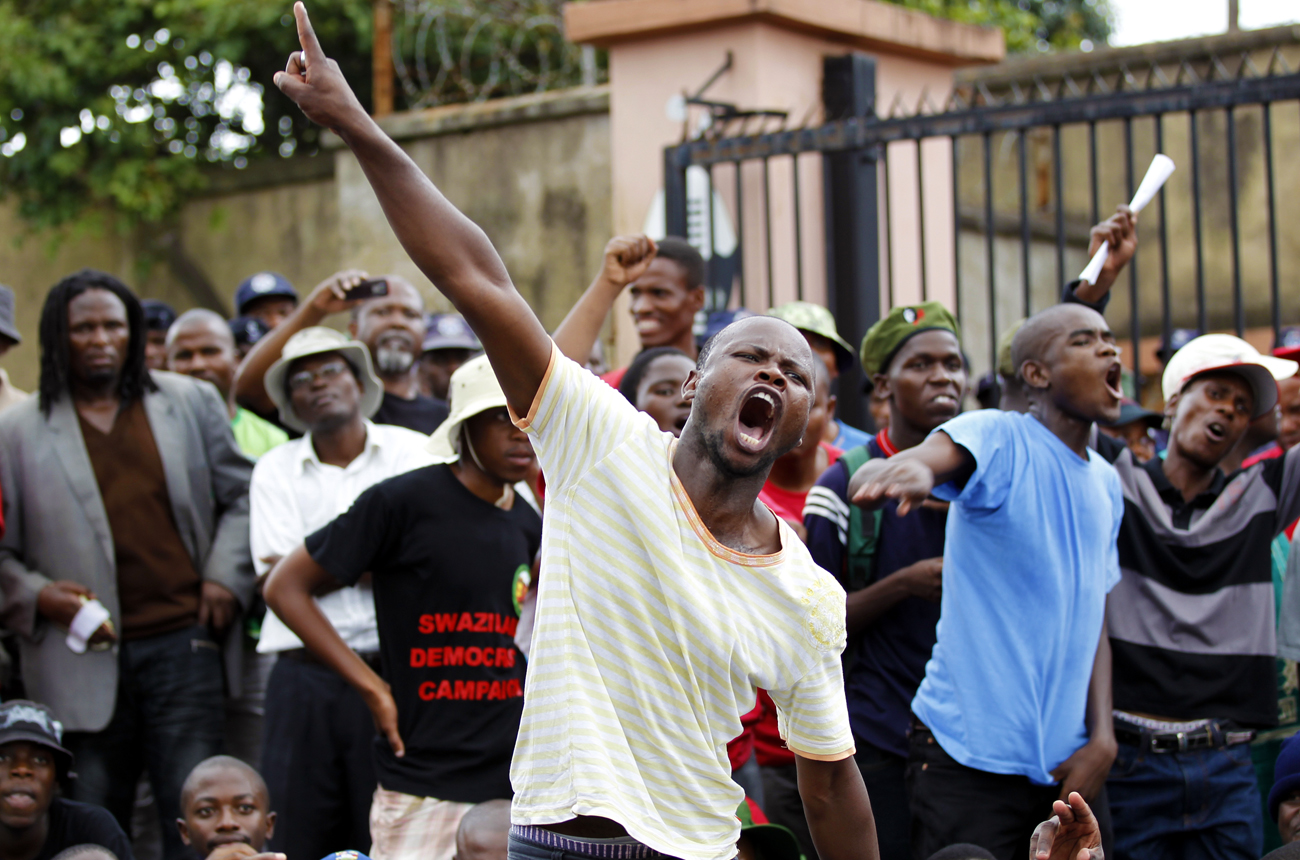 Swaziland is gearing up for mass protests on 12 April. Campaigners are demanding democracy and a re-evaluation of the role of the monarchy. But the jury is out on whether the uprising will attract the popular support necessary to effect regime change. By PETER KENWORTHY.

Inspired by Tunisia and Egypt, Swaziland is the latest African country to plan an uprising based on online social networking tools such as Facebook. The name and the date of the campaign, the “April 12 Uprising”, are symbolic. On 12 April 1973, King  Sobhuza II, absolute monarch and father of reigning King Mswati III , declared a state of emergency that banned all political parties, centralised all power within the monarchy and generally set the course for the mass poverty and increasing financial mess that Swaziland finds itself in today.

This state of emergency, and a monarchy that is increasingly out of step with the desperate situation of the majority of Swazis, is still in place 38 years later. The effects of this are clear. The regime brutally and routinely clamps down on all calls for democracy, however, peaceful, two-thirds of the population live below the poverty line while the monarchy and a small elite live in luxury, hundreds of thousands survive on food aid from the World Food Programme, more than 40% of the population has Aids and the unemployment sits at 40% as well.

Those behind the April 12 Uprising, who are all anonymous except for the group’s founder, “Jahings Dada”, promise that “a hundred-thousand men” (and presumably women too) will “march into the country’s city centres to declare a 2011 democratic Swaziland free of all royal dominance”.

More specifically, they demand democracy and a (provisional) end to the monarchy. The regime must “hand over power to a transition government elected by the Swazi people”, and “the king must vacate office immediately and go on vacation” until the Swazi people have decided on the future of the monarchy. They also speak of wealth redistribution, free education and health facilities, the “uprooting of traditional structures”, and of creating an “egalitarian society”.

The campaign claims to be “unaffiliated”, that “all political parties and civic organisations” are “invited to take a leadership role” in the campaign, and that there has been “on-the-quiet” recruiting in “major centres” to ensure that the campaign is able to be truly national in scope.

The representatives of the various organisations within the democratic movement in Swaziland and foreign experts have been cautiously optimistic about the campaign’s potential. Thamsanca Tsabedze, from the Foundation for Socio-Economic Justice, calls the April 12 Uprising “extremely important and absolutely necessary”.

“It has the potential of exerting the necessary pressure on government to concede power one way or the other,” he says, “and to a certain extent it has already succeeded. A clear attestation to this has been the outcry by a member of parliament who also happens to be a minister that his constituency is infested with people who are talking about the April 12 Uprising.”

On the other hand, Tsabedze warns people not to be overly optimistic. “The numbers might not be that much impressive owing to the fact that the April 12 Uprising has taken a more radical and broad approach in announcing itself as an activity that seeks to topple the government. A low turnout might impact negatively because people might not take the mass democratic movement seriously in the future for similar activities.”

Bongani Masuko, Cosatu’s international relations secretary is also cautiously hopeful. “I do believe it will contribute to the advancement of our struggle objectives for a democratic Swaziland,” he said. On the other hand, he insisted that it will take the energy of the democratic movement as a whole to bring change. “We must not fall into the trap of believing that it is the ongoing social networking or Internet sites that have made people aware of their problems and the existence of a struggle in Swaziland. It is the years of hard work, dedication and sacrifice by cadres of the progressive movement, civil society and all social forces involved. Every struggle is not an event, but a process.”

Richard Rooney, former associate professor at the University of Swaziland and author of the widely read Swazi Media Commentary blog, is less sure of the initial impact of the campaign, mostly because of the logistical problems in getting people in from the rural areas, where most Swazis live, and because he believes people are still too scared of the consequences of a large-scale demonstration. “People are very unhappy that the economic meltdown has started to affect them personally. This has brought them on to the streets. April 12 is about something different. It is the stated aim of the April 12 Uprising Facebook group to ‘topple’ the Swazi monarchy. It remains to be seen how many people will take to the streets to support that.” He does acknowledge, however, that even though the campaign might not achieve its immediate goals of regime change, it might still “be the day that led to something else”.

Another representative from within the democratic movement, who wished to remain anonymous, is worried about the lack of coordination around April 12. “I am not sure that there will be an uprising nor that there has been extensive preparation to ensure a huge turnout.” He did, however, believe that the democratic movement as a whole was well prepared for action in April. “My colleagues will be coming up with a rollout, if not for 12 April then for some dates in April.”

But whatever the scope and impact of the campaign come April 12, the regime and those that support it are visibly worried about it. The Swazi senate has mandated the minister of labour and social security to try to prevent it, security forces are allegedly searching high and low for those behind it arbitrarily taking people in for questioning according to the campaigners and parts of the conservatively inclined and heavily censored Swazi media are busy discrediting it in what organisers term a “smear campaign”.

Additionally, and perhaps more worryingly, the Swazi army has been sent for training in Pakistan and quantities of military hardware have recently been bought (the military budget is now equivalent to the health budget). “We are spending a lot on the army, but we are not anticipating what is happening in North Africa. The army is there to avoid such situations,” finance minister Majozi Sithole told AFP.

All this is a clear indication that the regime, known for its brutality against peaceful democracy campaigners, is not going to go quietly, however much the campaigners insist on wanting a peaceful demonstration. Many in Swaziland hope, however, that a combination of a huge turnout, good international press coverage, and the fact that even the armed forces and police are beginning to feel the economic problems, will ensure a peaceful and ultimately successful demonstration. DM

Peter Kenworthy is a British citizen who lives and works in Denmark. He has a Masters Degree in International Development Studies and English from Roskilde University. He has worked for several NGOs, including Amnesty International and Africa Contact. He has travelled extensively in Africa, including South Africa, Zimbabwe, Swaziland, Western Sahara, and Zambia. He blogs at Stiff Kitten.

Photo: Protesters take part in a march in Mbabane, the Swaziland capital, March 18, 2011. Thousands of Swazis marched on the prime minister’s office on Friday in a rare protest to demand the resignation of the tiny southern African kingdom’s government. Swaziland is in the grip of a serious financial crisis and civil servants fear they will not be paid this month after Africa’s last absolute monarchy suffered a huge drop in income from the Southern African Customs Union. REUTERS/Siphiwe Sibeko