India wins Cricket World Cup, or, How to make a sub-con...

India wins Cricket World Cup, or, How to make a sub-continent erupt in one ball 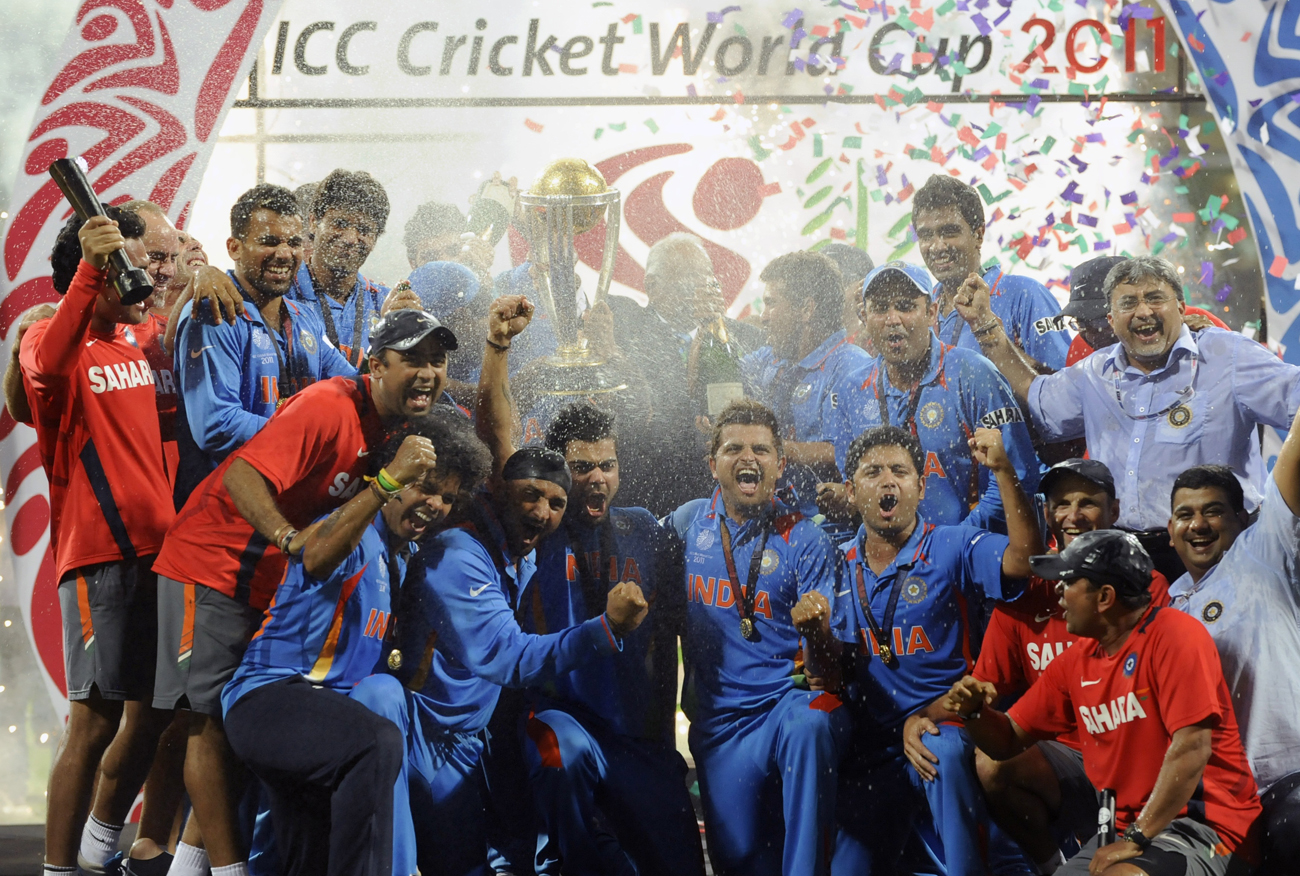 Not even Hollywood’s DreamWorks studios could have dreamt up a more fitting final to a dramatic world tournament than Saturday’s tense clash between two of the finest cricketing nations in the world – India and Sri Lanka – climaxing in a towering six and more than a billion delirious fans. By SIMON WILLIAMSON.

The 2011 Cricket World Cup’s apex was contested by India and Sri Lanka. Both won their semi-finals pretty convincingly and entered the Wankhede Stadium, featuring a pitch the pundits assumed would be decent for the bowlers.

Sri Lanka’s preparations were thrown by the unavailability of their premier all-rounder Angelo Matthews. They were forced to beef up their lower-order as well as bringing in the extra paceman so out went Matthews, Ajantha Mendis, Rangana Herath and Chamara Silva and, in came bit-part players Nuwan Kulasekara and Chamara Kapugedra, along with specialists Suraj Randiv and Thisara Perera.

Home-team India, by contrast, only had to make one change bringing in the unpredictable  Shanthakumaran Sreesanth for the injured Ashish Nehra.

The toss was an unsportsmanlike shambles and had to be retaken as the match referee didn’t hear Sri Lanka skipper Kumar Sangakkara’s call. Opinion is divided as to whether he called heads or tails, but in the end the two captains couldn’t honestly agree on what had happened and the toss was retaken. Sri Lanka won and opted to bat.

Upul Tharanga and Tillakaratne Dilshan opened for Sri Lanka, but the bowlers kept things quiet – Zaheer Khan only conceded a run off his 20th delivery – until Dilshan smacked two fours off Sreesanth in the sixth over, but India responded strongly as Zaheer induced an edge off Tharanga which was snapped up in the slips. The Indian bowling remained tight and the pressure grew further as Dilshan had a Harbhajan Singh ball ricochet off three of his limbs into the stumps. The two most-capped Sri Lankan batters were in as Mahela Jayawardene joined Sangakkara at the wicket, and with some good running and attacking boundaries, the run rate began to rise. Jayawardene scored at a run a ball for the most part, and the 50 partnership came up in 56 balls. India tried to keep the pressure on with solid fielding, but the pair majestically moved the momentum their way. It took a rank bad ball – a wide long-hop from Yuvraj Singh – to get a false shot from the captain who nicked through to Indian wicketkeeper and captain MS Dhoni and departed for 48.

Jayawardene continued to exude the class and quality we have come to expect over the years. He deftly pushed the ball all around the ground and constantly hit shots wide of third man with his superb placement finding the boundary repeatedly. His 50 came up in 49 balls, just before Thilan Samaraweera was trapped in front by Yuvraj. Chamara Kapugedera followed in the next over after he was fooled by a Zaheer slower ball.

Jayawardene batted on beautifully, reaching a glorious century off 84 balls. That he made it was in no small part due to a willing ally in Nuwan Kulasekara who rotated the strike smartly in a partnership of 66 off 49 balls. With some lusty blows from Thisara Perera, Sri Lanka closed on 274. I felt that the pitch wasn’t as slow or difficult to bat on as some of the experts made out, but the pressure on the team chasing in a World Cup Final naturally made 275 a stiff target.
India’s reply began shockingly as Virender Sehwag was struck plumb lbw in the first over, and wasted a review to boot. Sachin Tendulkar, the absolute prize scalp, pushed one or two boundaries, but was caught behind after playing a loose drive off a wide Lasith Malinga delivery, and India were in trouble at 31/2.

Gautam Gambhir and Virat Kohli combined for a good counter-attack partnership which flowed at about a run a ball and Gambhir brought up his half-century off 56 deliveries, having begun his knock under immense pressure. Kohli fell to a sharp catch and the brakes were slammed on the India chase as the scoring rate plummeted to below five an over. However, the experienced head of MS Dhoni, who took control of the situation creaked the scoring rate up again and he began to take charge. Once the partnership passed the 50 mark, Dhoni was in complete control. Anything loose was dispatched and his assertive body language showed Sri Lanka, the packed stadium and more than a billion viewers he meant business. South Africa, in their chase against New Zealand, were crying out for an innings like this from a solid, headstrong player. He had promoted himself up the order ahead of the tournament’s form player, Yuvraj Singh, in a clever piece of captaincy as it maintained a left-and-right-hand combination, as well as allowing him to diffuse some of the pressure on his team.

At the mandatory ball change (after 34 overs) India required 100 off 96. Sangakkara tried to force a breakthrough, but nothing worked. Dhoni took on whoever came at him and played a few stunning cut shots off Muttiah Muralitharan deliveries either side of the sweeper on the off-side boundary. The pair kept going and 54 were required off the last ten overs.  Gambhir, stupidly, put the chase in jeopardy as he needlessly pranced down the wicket to Thisara Perera, swung his bat like he was playing golf and saw his middle stump pegged back. He departed for 97, an excellent knock with a farcical end, but fortunately the big man was still in. He was joined by Yuvraj.

Perera earned himself another over with that wicket, but the first delivery of his ninth over was deposited by Dhoni over the third man boundary for six. A close run-out and a massive lbw shout were dangerous blips and then the batting Power Play was taken in the last five overs of the innings. Remember the crippling effect it had had earlier in the tournament? Well, India exorcised those demons. Malinga, usually lethal at the end of an innings, had three overs remaining for the Power Play so the batsmen were forced to attack Kulasekara who bowled the 47th. Dhoni started by blasting a cover drive for four and Yuvraj followed it with a pull for another boundary. The over went for 11 and 16 runs were needed off the last 18 deliveries.

A misdirected Malinga slower ball was issued to the fence and was followed by a full toss which went in exactly the same direction. With seven needed off 15 balls, the match was pretty much done.  It was whittled down to a requirement of four.

Mahendra Singh Dhoni then sent his country into paroxysms of purest pleasure as he beat the hell out of a Kulasekara half-volley which cleared the ropes. Although Gambhir and Jayawardene both outscored him, this win was undoubtedly Dhoni’s. If you want to see the definition of BMT in one man, look no further than the Indian captain.

The Wankhede Stadium erupted for the home team, and deservedly so. Sachin Tendulkar and Gary Kirsten were carried around the ground on the shoulders of the players. Fireworks lit up the Mumbai sky and Indian flags waved everywhere as a billion people began to party. South Africans doffed their caps and offered a congratulatory nod in India’s direction as the final was Gary Kirsten’s last game as India’s coach.

What was a tense match actually ended in a six-wicket belting – and more than a billion people going bananas.