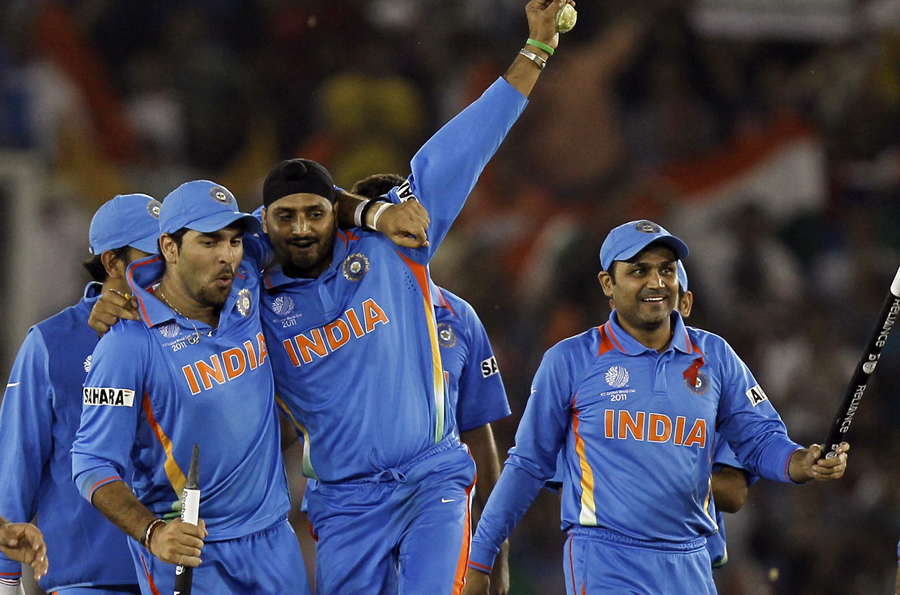 India delighted their millions of fans as Pakistan let themselves down with an average performance in the field and some sloppy batting in the second semi-final in Mohali on Wednesday, setting up a classic clash with old rivals Sri Lanka in Mumbai on Saturday. By SIMON WILLIAMSON.

As much as The Ashes may pride itself on cricketing rivalry, nothing matches the size of an occasion when the sublimely talented India play the unpredictable Pakistan. Mohali was the venue and if the rare sight of the two countries playing each other wasn’t enough, it was a Cricket World Cup semi-final – the winners to progress to Mumbai and the losers to be castigated by their own fans.

Mahendra Singh Dhoni won the toss and decided to bat with the only change to his XI being the introduction of Ashish Nehra in place of R Ashwin. Pakistan fielded an unchanged unit, meaning Abdur Rehman again sat out again with Saeed Ajmal preferred.

Umar Gul grabbed the new ball and in his second over Virender Sehwag sent three leg-stump half volleys to the midwicket boundary and then dispatched a no-ball through the off side. Thankfully the free hit went for nought and a mere 21 was taken off the over. Abdul Razzaq managed to haul the run rate back the following over which only went for 12 and Gul’s return went for eight. After five overs, India were sitting pretty on 47/0 with Sehwag on 38 off 23 balls (half of which were dot balls). Photo: Pakistan’s Wahab Riaz bows down on the ground after taking the wicket of India’s Zaheer Khan during their ICC Cricket World Cup 2011 semi-final match in Mohali March 30, 2011. This was Riaz’s fifth wicket for this match. REUTERS/Vivek Prakash.

The left-armer, Wahab Riaz, was brought on to stem the deluge and reaped rewards immediately as Sehwag was caught in front of his stumps. Saeed Ajmal, the highly talented young Pakistani off-spinner bowled a stunning spell within the bowling Power Play and nearly had Sachin Tendulkar out twice: once with an appeal for lbw which looked out to everyone except Hawkeye and a stumping opportunity when Tendulkar lifted his back foot off the ground. As if that wasn’t enough, Tendulkar pulled a Shahid Afridi delivery into the hands of Misbah-ul-Haq at midwicket in the following over and it was put down.

Gautam Gambhir was actually the next to fall after a somewhat uncomfortable-looking innings when his outside edge was beaten by Ajmal and Kamran Akmal knocked the bails off. Tendulkar carried on though and brought up his 95th ODI 50 off 67 balls.

India’s good start was, in large part, due to the arm-length error count as Pakistan were an abomination in the field, dropping a deluge of catches and misfielding regularly. That sloppiness was somewhat countered as Wahab Riaz came back for a spell and induced a leading edge from Virat Kohli which flew to point and was (very surprisingly) caught. Yuvraj Singh was sent packing after one ball when a pacy in-swinging yorker smashed down his stumps.

Dhoni and Tendulkar continued to score, albeit slowly, as the run rate threatened to dip below five to the over. Tendulkar was dropped again off Mohammad Hafeez, but in Ajmal’s next over, one finally stuck as The Little Master drove uppishly to the Pakistan captain at short cover. Photo; Fans react as they watch the ICC Cricket World Cup semi-final match between India and Pakistan, on a screen in Mumbai March 30, 2011. India beat Pakistan by 29 runs on Wednesday to reach the World Cup final. They will face co-hosts Sri Lanka in an all-Asia final in Mumbai on Saturday. REUTERS/Danish Siddiqui.

At 187/5 at the end of the 37th over, the last pair of recognised batsmen had a job to do and they lasted until the score was 205 when Dhoni was trapped in front by Riaz, whose golden arm continued to pay dividends. Harbhajan Singh and Suresh Raina took the batting Power Play soon after during which Umar Gul continued to be dispatched around the ground. Ajmal fooled Harbhajan with a  doosra, but the tail scraped together a few more runs with Raina and India ended on 260/9 after their allotted overs. Pakistan probably would have taken that at the start of the game, but their cascade of dropped catches could have made such a difference.

Kamran Akmal and Hafeez opened the Pakistan innings and raced beautifully along to 44 before Zaheer Khan induced an uppish drive off the blade of Akmal which was snuffled by Yuvraj Singh at point.

Asad Shafiq came in at number three, but India began to stagger the run rate with tight spells from Munaf Patel and Harbhajan Singh through the bowling Power Play. The pressure finally got to Hafeez who went for a sweep off Munaf and edged behind. He departed for a sweet 43 off 59 balls.

And it was here where India, aided by a softer ball, began to draw the game back. As the required run-rate peaked above six an over, Shafiq, who had looked great at the crease, tried to cut a Yuvraj delivery which was too full and knocked his middle stump down. Yuvraj’s next over saw Younis Khan spoon one to a jumping Raina at cover and Pakistan’s chance at a World Cup Final looked elusive. Photo: India’s Prime Minister Manmohan Singh (R) speaks with his Pakistani counterpart Yusuf Raza Gilani as they watch the ICC Cricket World Cup semi-final match between India and Pakistan in Mohali March 30, 2011. The prime ministers of nuclear-armed foes India and Pakistan stood side by side on Wednesday at a World Cup cricket match and clapped to each other’s national anthems in a symbolic gesture aimed at rebuilding ties shattered by the 2008 Mumbai attacks. REUTERS/Raveendran.

Initiative was required and Umar Akmal, a man who believes that there’s no point in batting unless one is attacking, decided to show some. Another six off Yuvraj followed and for the first time in ages, there was pressure on the Indian bowlers. Harbhajan, also one to be aggressive, ended the potential of Umar’s innings when he pegged his off-stump back and the game had swung massively towards India, even though Abdul Razzaq and Shahid Afridi (scorer of the two fastest ODI hundreds) were due in next.

Razzaq was bowled by a stunning Munaf Patel leg-cutter and in came Shahid Afrid who swung at a few, including a reverse-sweep off Yuvraj for four. However, Misbah plodded along like a postman on strike, scoring around a run every two balls. The pressure he was putting on the Pakistan innings paid off handsomely for India as Afridi tried to hit a full-toss out the ground and was caught by Sehwag in the off-side ring. From then it was a formality and India needed only to close the game out with tight bowling.

Ashish Nehra provided exactly that with four dot balls at Wahab Riaz before a wild swipe ended his innings. At this point Pakistan required 62 off 31 balls with two wickets in hand. Gul followed soon after.

While the odd Misbah slog elongated the match, it was for nought as 30 were required off the last over and none of the first four balls was scored off. Misbah was caught at long-on off the fifth and Mohali erupted as India qualified for their third Cricket World Cup final.

Misbah finished with 56, but it was off 76 balls – not quite what the situation required with 84 runs required off the last 10 overs. Pakistan’s spray-and-cook attempts at grabbing on to the ball earlier in the day cost them dearly, as well as their best fast bowler, Umar Gul, virtually losing the ability to bowl entirely.

And so the script has been written: Muralitharan’s last stand will be against the modern-day powerhouse of cricket. I’d tune in Saturday if I were you. DM