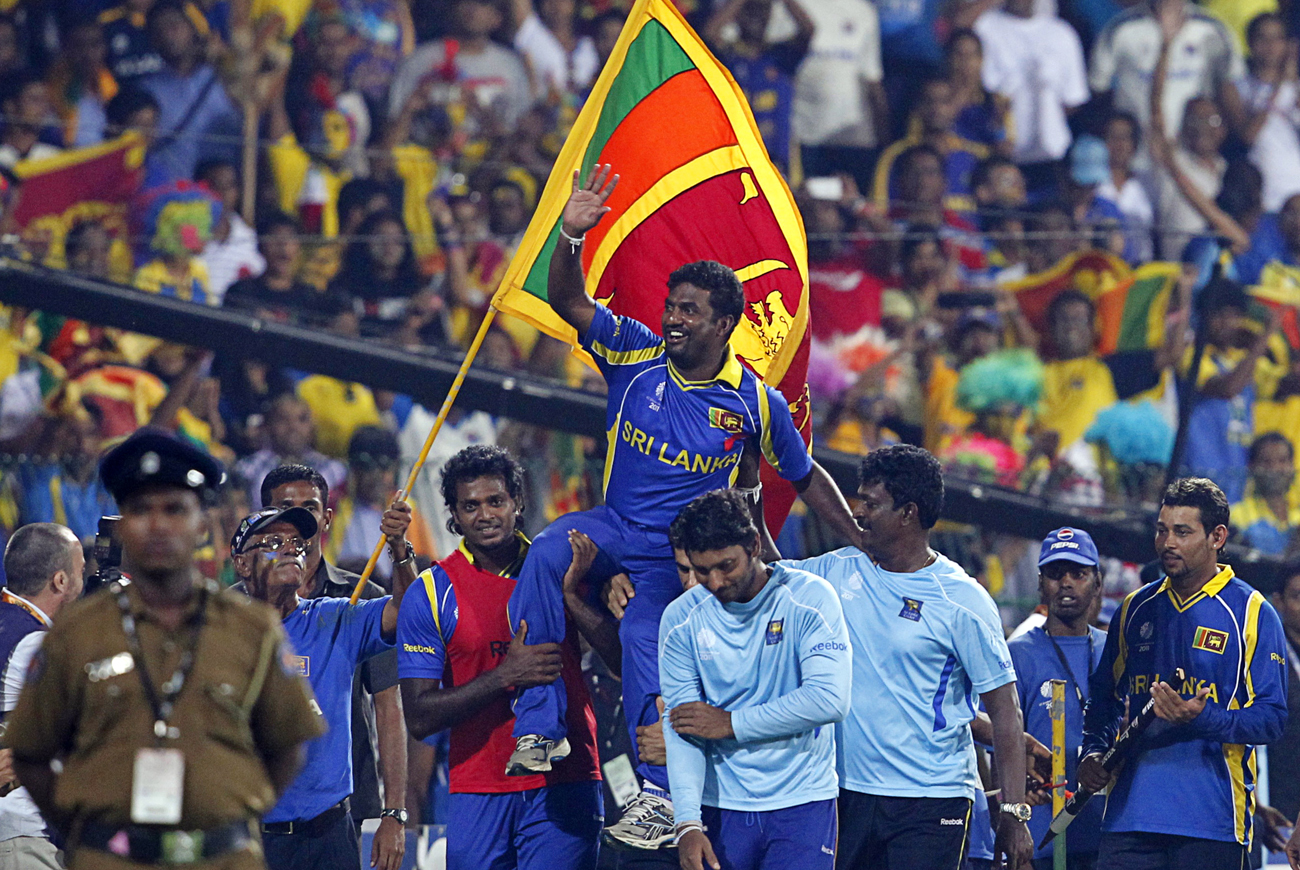 On Tuesday, the ecstatic Colombo crowd danced and celebrated as Sri Lanka successfully chased New Zealand’s modest total, securing their spot in the World Cup final in Mumbai. Though the Black Caps rallied towards the end of a tense game, their great effort was not enough to stop the hosts from presenting a wonderful gift to Muttiah Muralitharan, their greatest player ever. By SIMON WILLIAMSON.

A late rush of wickets saw the Kiwis put excruciating pressure on the Sri Lankans, but weak bowling at the beginning of the chase and a total that wasn’t enough due to a major collapse at the end of the Black Caps’ innings proved to be the difference between the teams.

New Zealand won the toss and chose to bat on the same wicket on which Sri Lanka hammered England at the weekend. Brendan McCullum and Martin Guptill, the men at the top, started brightly, highlighted by McCullum slog-sweeping Rangana Herath into the stands. He attempted the shot in Herath’s next over and had his off-stump knocked over by one that didn’t turn. Jesse Ryder joined Guptill, but the ball was already getting older and runs were harder to come by. At the end of the mandatory 10-over Power Play the score was 38/1. New Zealand crawled along until the drinks break accounted for Ryder who nicked a short and wide Muralitharan ball through to the keeper.

Lasith Malinga has long been regarded as the world’s best exponent of the yorker since Waqar Younis. His return spell saw him account for Martin Guptill with a fast, swinging boot-breaker which snuck between the batsman’s bat and toes and thunked into his middle pin.  Scott Styris came in and played an intelligent, responsible knock, with support from Ross Taylor. The pair put on a decent 77 runs at 4.35 an over and were looking to up the rate when Taylor holed out to the mid-wicket boundary. Kane Williamson entered and played a sprightly knock, using his feet to attack the spinners, but it didn’t last as he walked in front of his stumps to Malinga, was trapped lbw, and the New Zealand innings began to fall apart. Nathan McCullum was fooled by a Malinga slower ball and then Styris, facing Muralitharan’s last ever over in Sri Lanka (the great man will be retiring at the end of the World Cup and the final is in Mumbai) was trapped in front by his last ever home delivery for 57. It was this sole knock that gave New Zealand a small, but fighting chance. Unfortunately, nothing was built upon Styris’ innings as Jacob Oram, Tim Southee and Andy MacKay went soon after and from a solid position at 192-4, New Zealand crashed to 217 all out – a collapse of six for 25.

New Zealand opened the bowling with the off-spin of Nathan McCullum, which had strangled South Africa in the quarter finals, but Sri Lanka’s approach was different as Upul Tharanga hit the third ball of the innings for stunning straight six. Tim Southee, the Black Caps’ biggest pace weapon, wasn’t allowed to settle either and was thrashed for 12 in his opening over.

Tharanga threatened with a bright 30 at a run a ball, but Southee, in a return spell, managed to get his wicket with one of the worst balls of the night which looped in the air to a diving Ryder at point. The pure physics of the dismissal aside, it eased pressure on the Kiwis who then slowly began to haul the innings back their way. Daniel Vettori’s first five overs only cost 16 and Oram’s four went for 11. Andy MacKay, a left-arm seamer bowled a tidy spell, beating the bat on the odd occasion, but there wasn’t much in the New Zealand attack that could deal with the highly competent Sri Lankan batting.

The good balls, of which there were many, were dealt with correctly, and the rest were scored off with ease, including every rank bad ball finding the fence. Tillakeratne Dilshan played a sedate yet responsible innings and brought up his 50 off 71 deliveries and Kumar Sangakkara played similarly bringing his up off 72. Good shots to and over the boundary were  mixed with good running and some amazing shot placement. Southee eventually induced an uppish drive from Dilshan who was out for 73 off 92 balls and this precipitated a mini-collapse. Mahela Jayawardene was trapped lbw by Vettori  for one and then Sangakarra cut one in the air to third man. All of a sudden there were two new men at the crease – the two specialist batters of Sri Lanka’s as yet lower middle-order. With 50 still to win (admittedly at under four an over), there was pressure at play again, and New Zealand’s fielding and bowling units began to click properly.

The runs simply dried up as Sri Lanka scored seven in the five overs following Sangakarra’s dismissal even though the equation was still very much in Sri Lanka’s favour – 44 required off the last 10. Two boundaries off a Ryder over seemed to swing the game their way before Tim Southee bowled Chamara Silva and an injured Angelo Matthews walked to the wicket accompanied by a runner.

Thilan Samaraweera relieved the pressure with a slog to mid-wicket off Ryder as Vettori decided to close the match with pace (well, seam) bowling. Tim Southee’s next over went for six, courtesy of some overthrows, and 22 were required off the last five. Andy McKay then bowled a wide down the leg side which went for four and a huge appeal for caught-behind was turned down on review. Southee continued, but his threatening spell was cut by Angelo Matthews who did what the Sri Lankan middle-order should have done long before – attacked. The first ball of the 47th over was smashed over long on for six and the second to the boundary.  With two to win, McKay bowled a peach which was edged straight through the gap between keeper and slip and Sri Lanka had hobbled over the line to the 2011 Cricket World Cup Final.

It was disappointing for New Zealand after the effort they put in at the back-end of the match, and again they showed the ingredients they used to beat South Africa. They depart the tournament now, but they can do it with a real sense of pride. This is a team which suffered the ignominy of dropping an ODI series to Bangladesh not that long ago and now reached the semi-finals of the World Cup, beating Pakistan and South Africa en route.

Sri Lanka surge forward. The better team took the honours on the day and will meet the winner of India vs Pakistan in the final. And correctly so. If the cricketing gods smile (as many hope they will), Muralitharan could end his career with a second World Cup trophy. DM