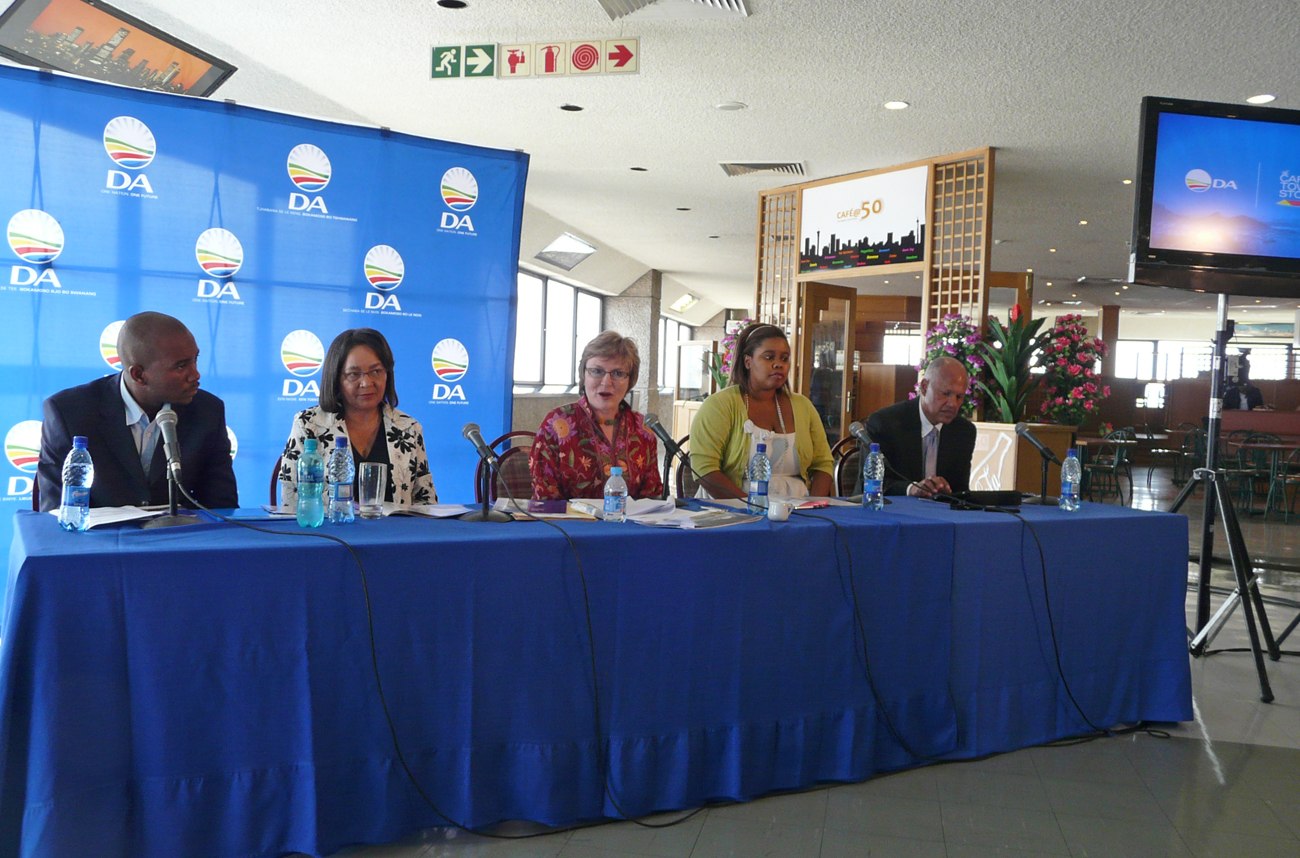 The DA has launched its election manifesto document that proves, it says, how much better it is than the ANC. Inevitably then the launch press conference in central Johannesburg was a bit of a boxing match between the DA and roomful of somewhat raised eyebrows. By SIPHO HLONGWANE.

The DA’s “Look at us. Now look at the ANC. Now look back at us. Now vote” strategy is now in glossy magazine form, with the launch of the “Cape Town Story” election manifesto document. The DA’s leader Helen Zille, the party’s two most prominent mayoral candidates, Mmusi Maimane of Johannesburg and Patricia de Lille of Cape Town, were on hand to field media questions, as was the party’s national spokeswoman Lindiwe Mazibuko and Wilmot James, the party’s federal chairman.

In presenting the document, Zille’s speech was a fantastic grocery list of the ANC’s cock-ups in the City of Cape Town. Then she went on to what the DA has done since coming to power there. Now they’re looking to export that “formula” to other cities. “The people of Cape Town already know much of the ‘Cape Town Story’,” Zille said. “And so this is why we chose Johannesburg as the launch of this booklet.”

But Zille wouldn’t be drawn into predicting election results. “Seven weeks is a long time in politics,” she said. Despite describing how parties allocate their budgets for campaigns (according to a weighted vote system, run by a very smart statistician, we’re assured), she simply would not explicitly say how the election results would work out.

But one thing Zille is absolutely certain about is how much better her candidates for Joburg and Cape Town are than those of the ANC. “Where is the ANC’s mayoral candidate for Johannesburg?” she replied when asked about Maimane’s credentials. “I think it’s going to be Parks Tau, but they dare not tell the city of Johannesburg that the man responsible for the billing crisis will now run the entire city.”

And no, Maimane’s selection as a candidate wasn’t about race, Zille explained. He went through a vetting process, and was grilled by the electoral college, so he’s qualified all right. But that’s not to say the DA doesn’t care about race. It cares so much it opens up competition for every seat so everyone can apply to run under the party banner.

You’d have been forgiven for wondering what the other people were doing on the panel, given how many of the questions Zille took. But James did get a word in: “The DA should not be punished for trying to be the most racially diverse party in the country,” he said. “Trevor Manuel would never be elected as leader of the ANC, because the top seats in the ANC are reserved for black Africans. Manuel could become the leader of the DA though,” he said.

In fact, that is exactly what Mazibuko said, “If the ANC wants to play race games, then it can do so alone. We certainly won’t join them.”

Not to be unfair to James, it is impossible to take on the ANC without nodding in the direction of race. But you’d imagine someone would have briefed him about opportunism and how such statements could easily swell the ANC’s arsenal.

In response to a question about what in the DA he disliked the most, Maimane said there were still factions within the DA that were more about the party’s past, rather than the future. Navigating that was his most difficult challenge, he said.

When pressed again and again about the ANC, Zille finally relented and griped about the ANC’s tactics in winning back lost municipalities. The safe word, “racial nationalism” even popped into the mix, as one would have expected.

“Cape Town Story” is a really tough document for the ANC to counter. Given the party’s disarray in Western Cape, there’s no chance of them taking back the Mother City. Hell, the DA is probably gunning for another metro somewhere. Just not Johannesburg. This city will someday probably be the last bastion of ANC rule at local level in the country. But watch out, Port Elizabeth. DM