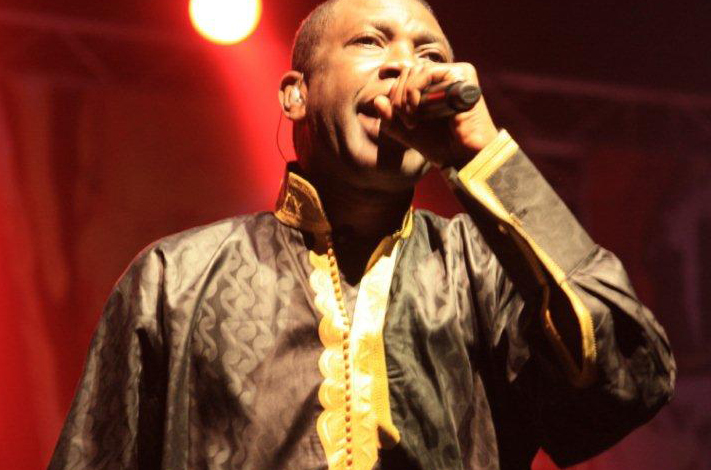 "Je t’adore!” the man shouts, his arms stretched towards the stage. “Vive le Sénégal!” he adds, jumping up and down to the sound. You can’t blame him as the Jazz Fest closed its doors early on Sunday morning with the Senegalese king of African music, Youssou n’Dour. It had been a festival of music, improvisations, theatrical performances, legends, a few hiccups and some strong messages. By EMILY GAMBADE.

The festival was a marathon. Forget about high heels and sexy dresses, by 23:00 on Friday, people were already sitting on the floor at Kippies, a few passed-out souls sound asleep despite the volume. Come Saturday and the whole venue turned into an in-the-making show with delays in the original programming and people missing out on some performers. Not easy to find your way through the jazz jungle, but that’s what such a grand gathering of artists does. It gives you the choice.

And what a palette it was! It was impossible to see all the musicians, so I was only able to catch a few.

Guitafrika with guitarists Steve Newman (SA), Eric Triton (Mauritius) and Alhousseini Mohamed Anivolla (Niger) shared quite an impressive conversation, in between layers of blues, deep desert-dry sounds and sensual Creole Zouk. “My idea was to do fair trade in music. Because we have fair trade in banana, in coffee, but world music is mainly made in the South while the money goes to producers from the North. African music, made by African performers on African soil,” said “Percy”, the man behind the collaboration.

Trumpet virtuoso Christian Scott described his music as “classic John Coltrane quartet played by an Indie band”. Mind you, he exposed his political views and angers, starting with what surrounded the Hurricane Katrina disaster. He demonstrated the energy of someone who wants to be heard. Some of his tunes sound like protest songs although his smile and indubitable charm temper his roaming anger.

R&B and funk veterans Earth, Wind & Fire’s message “has always been the same: empowerment of human beings and integrity in the love of humanity”. Forty years down the line, the message might have been lost in translation in their production of new titles. Or maybe not, it was becoming very late to be philosophical.

Saxophonist Wayne Shorter’s “serious” jazz was pure joy. The bouncing tunes going crescendo were like fireworks on Rosies’ stage. The inspirational legend, Miles Davis’ henchman, jazz-rock Weather Report co-founder, made it loud and clear – “real” jazz is all about improvisation. Gazelle Lim-pop, “Is like pop, but not pop. It’s derived from the Limpopo River. It is the place that brings together the countries that we take a lot of inspiration from. It runs from Angola all the way throughout Mozambique and we believe that this river is a very special place for us because it gathers all those different countries around one.”

That had many critics’ eyes rolling in despair, yet Gazelle Lim-pop produced a show that was theatrical, colourful, electro-pop-dance injected, and, er… satirical. “It is satirical because it is very important that we take responsibility as artists and use the music and voices as a vehicle to speak about social issues, speak about politics, to question things; we do it through satire. Only through satire can you reach the mind and the heart of the people. We use this opportunity to do something greater than just being a band.” What it lacks in subtlety it makes up for in getting everyone dancing.

Closing the show in a daze of glory, Senegalese genius Youssou n’Dour, with 10 musicians, two backing vocalists and a dancer produced joyous Mbalax tunes, digging his deep voice into the audience’s heart. It was completely irresistible. King Youssou was called back on stage twice and gave a full extra hour, his smile floodlighting Kippies. If music can heal the world, then Youssou n’Dour’s sound is powerful medicine.

By 2:30 on Sunday, it was time to switch off the lights. The venue went back to sleep, people still walked about, some still danced in the street, grasping at floating reminders of all that jazz. What a festival! After such performances, it will not be easy waiting another year to do it all again. DM