News24 throws its hat into the isiZulu ring

News24 throws its hat into the isiZulu ring 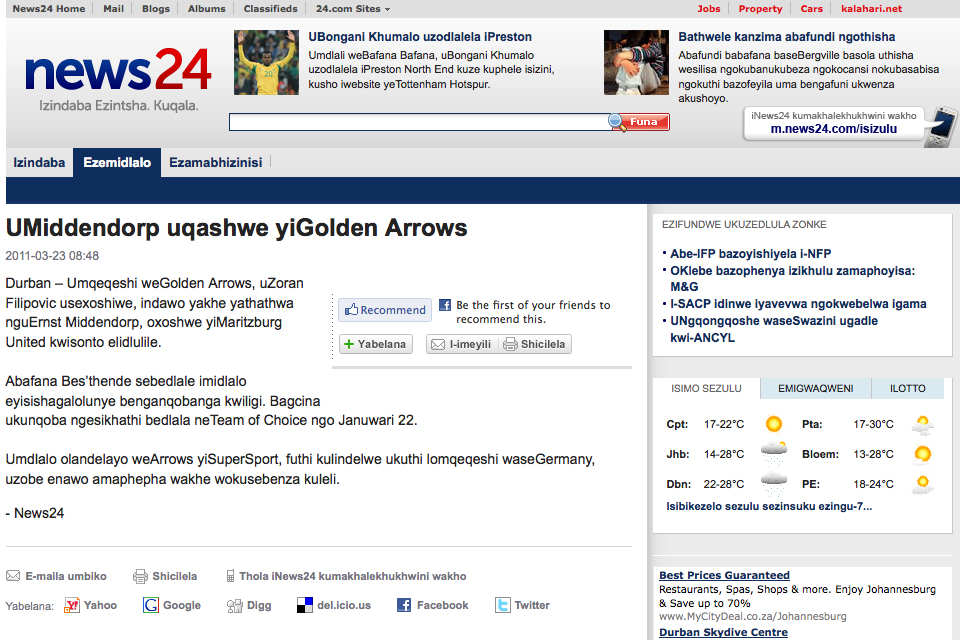 Conventional wisdom at the beginning of the last decade was that there was no way in hell  any money could be made in newspapers published for the black population. The Daily Sun proved that to be humbug. The Sunday Times took it a step further when they launched a isiZulu edition. Media24 has now taken that idea online, with the new isiZulu News24. Clearly then, there is gold in them thar hills. By SIPHO HLONGWANE.

When the Daily Sun was launched in South Africa in 2002, to cater for the bottom end of the market, there was a lot of disdain from the press. We can hardly sell the news to the richer segments of the population, they said. How on earth do you intend to persuade the poor to buy the news?

As it turns out, the Daily Sun is South Africa’s biggest newspaper today, reaching more than 3.8 million readers. There is an obvious massive appetite for local, tabloid newspapers in the lower end of the market. It just so happens that in South Africa, the lower income earners are black. And two newspapers in KwaZulu-Natal, Isolezwe and iLanga have proven there is a strong market for news in indigenous languages, at least among isiZulu-speaking people.

Isolezwe was started around the same time as the Daily Sun, and iLanga is was formed by the John Dube, the first president of the African Native National Congress well over 100 years ago. Between these two papers, they sell more than 100,000 newspapers on a weekly basis. That is not counting the weekend editions of either paper.

Avusa entered those potentially lucrative fields at the end of 2010 when it launched the isiZulu edition of the Sunday Times in KwaZulu-Natal.

News24 thinks that idea could work for online news as well, and an isiZulu version of News24 has gone live in the past months. According to News24 editor Jannie Momberg, who maintains editorial oversight over the IsiZulu edition of News24, audiences are only being informed of the site now, after they had given the team enough time to acclimatise to the editorial process.

At first blush, the isiZulu news seems to be a direct translation of the English News24. Not so, says Momberg. “We are not only translating English News24 content. It obviously plays an important role in the editorial mix, but this will be supplemented with aggregated wire copy and contextualised Internet sources. User-generated content will also eventually be an important part of the content presentation,” he says.

Momberg believes they were not competing directly with Isolezwe and iLanga for readers, but rather aimed to be one of the regular sources of news for those who read the news in isiZulu. “We don’t operate in the print world where different products compete for ‘exclusive’ readerships. Online it’s common for users to get their information from a variety of sources,” he says. “We are aiming to be one of those sources on a regular basis.

“The News24 isiZulu product is fairly unique. How many isiZulu breakings news web-/mobile sites are out there? We believe there is a major gap in the market,” Momberg says.

According to Momberg, the audience they are looking to attract, at least initially, is “young up-and-coming suburb/township residents”. He said their ratings show, News24 attracted 175,000 isiZulu-speaking readers in February. They hope to divert a sizeable portion of that readership to their IsiZulu site.

“A big focus of isiZulu News24 will be a mobile audience. South Africa has one of the largest mobile penetration rates in the world – more than 95%,” Momberg said. “Online we only have around 12% penetration. People interested in reading news in their home vernacular are poorly served, especially in the digital arena. This audience that wants to get regular news updates throughout the day in isiZulu would be our prime audience. Any isiZulu speaker that has access to the web or the mobile web is a potential target.”

The isiZulu language is already comfortable with news parlance. There has been a isiZulu newspaper for more than a century, after all. However, both iLanga and Isolezwe are very localised and laced with tabloid gossip. News24 won’t have the same flavour of news. Inevitably, it will struggle to translate concepts never been dealt with before. According to Momberg, their sub-editors rely on crowdsourcing their peers in isiZulu newspapers when they run into translating trouble.

News24 has one major advantage over the Sunday Times in reaching the isiZulu readers in KwaZulu-Natal – its strong user-generated culture. Readers will be able to generate their own localised content, much like Isolezwe and iLanga already do.
Localised content will also be very important if News24 hopes to attract isiZulu newspaper readers, who will typically be elder. Translating wire copy of international reports may work for younger, urban isiZulu readers, who will be far more familiar with mobile news, but it won’t cut it for newspaper readers. One wonders whether News24 wouldn’t pull this off more successfully with a team of IsiZulu journalists on the ground in KwaZulu-Natal and Gauteng, where most of the isiZulu nation is.
When the Sunday Times launched its isiZulu edition, the news editor of iLanga said to Bizcommunity this development was a vindication for isiZulu newspapers and the influence of the language, and that it heralded a bright future for his paper. But when it comes to international content, News24 will have to find an efficient and accessible way to translate the new concepts and ideas into isiZulu (it is a very adaptable language), or find that younger people would rather read that part of the news in English.

Against a backdrop of a decline in speakers of indigenous languages in South Africa and the continued dominance of English as the language of commerce, News24’s experiment may prove to be an important part of the platform upon which South Africa’s most widely spoken language is eventually rescued.

If the young people of today read the news in isiZulu and discuss it around the office water cooler in isiZulu, they’ll be far more likely to pass the language on to their children someday. DM