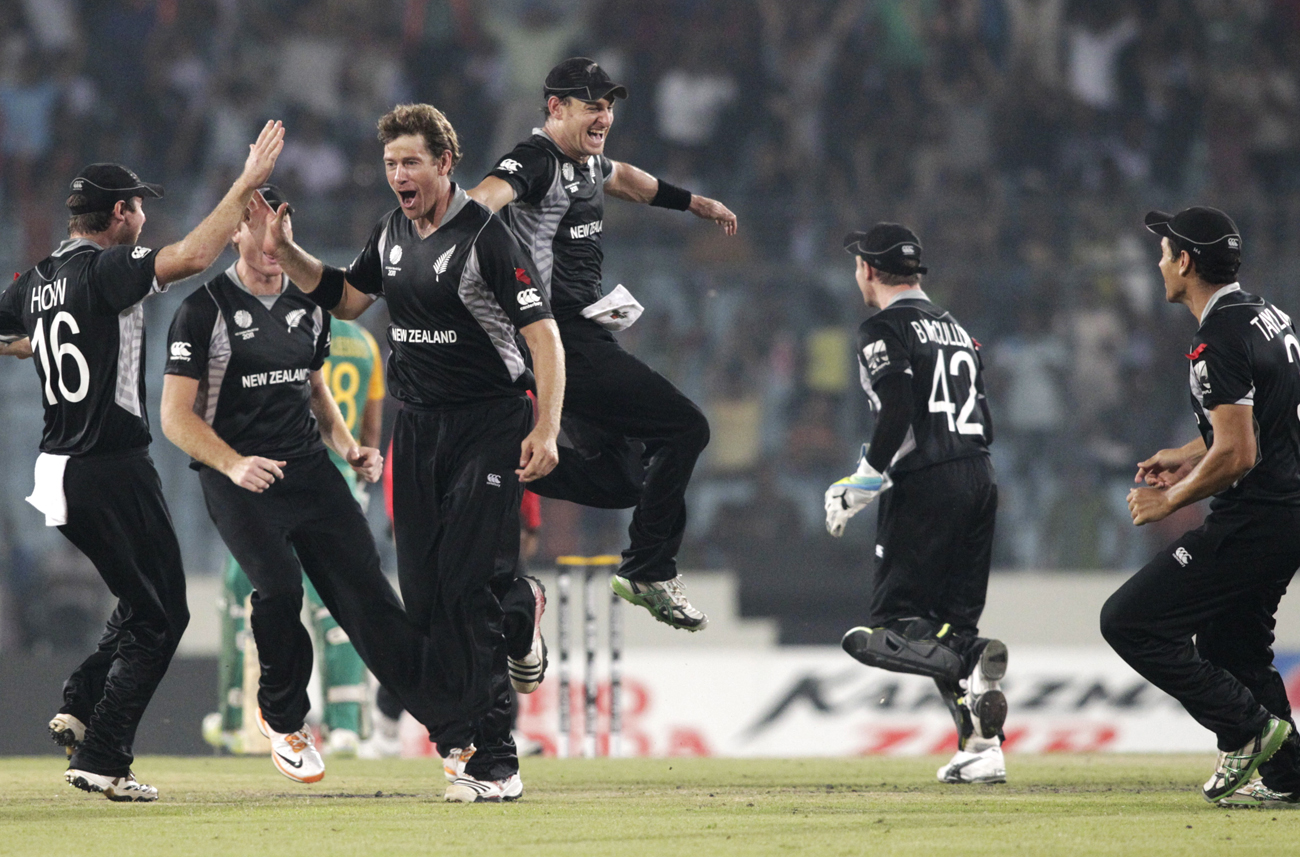 South Africa suffered another agonising exit from yet another Cricket World Cup and are still to win a knockout fixture in the competition - ever. Daniel Vettori’s superb captaincy and the Kiwis’ electric performance in the field broke Protea hearts through constant and intense pressure. And credit must be given to the Black Caps for harassing South Africa throughout their chase. By SIMON WILLIAMSON.

Daniel Vettori won the toss and chose to bat on what looked like a sluggish and New Zealand-friendly pitch in Dhaka. South Africa played at full strength with AB de Villiers, Dale Steyn and Morné Morkel coming into the side, and Lonwaba Tsotsobe unfortunately missing out.

Robin Peterson opened the bowling again and took his 15th  World Cup wicket in his second over as he caught and bowled Brendan McCullum for four. Martin Guptill, who came into this game with not an ounce of form remained consistent with it as he departed for oneafter skying a Steyn slower ball. Graeme Smith’s imaginative captaincy continued in this game as he brought on Johan Botha immediately to take on the left-handed Jesse Ryder who came in at first drop. Ross Taylor and Ryder steadied the ship bringing up New Zealand’s 50 off 77 balls.

They continued in this fashion keeping the run rate at about four an over with only the odd unsuccessful yelp from a bowler permeating a fairly monotonous innings. Smith rotated his bowlers repeatedly, with a four-over spell from Johan Botha being the longest. New Zealand were weary of being bogged down and Taylor began hitting, smiting Robin Peterson for a six over midwicket. However, when he tried the same trick off Imran Tahir he located Jacques Kallis standing deep on the mid-wicket boundary. He was replaced by Scott Styris who tried to keep momentum going, but chopped on to Morné Morkel. And Jesse Ryder finally threw it all away after a judicious and responsible innings when he finally took a swipe at Tahir and was gleefully taken just short of the rope. Nathan McCullum and Kane Williamson were needed to keep the innings together and they did so, adding 32 (worth double that on the surface) before another ill-timed and Power Play-induced swipe at Steyn looped a thunk to JP Duminy at point. The odd boundary followed and New Zealand wrapped up their innings for 221 having lost eight wickets. This was the first time in the competition South Africa failed to bowl out an opposition team, and New Zealand would have felt what they had was defendable. And as it turned out, they were 100% correct.

South Africa’s reply started badly with one of the worst pieces of luck you will ever see on a cricket field. Hashim Amla tried to cut a short ball from Nathan MacCullum (who opened) and bottom-edged it onto the wicket-keeper’s boot which popped up into Daniel Vettori’s hands at slip. South Africa counter-attacked, though, through Jacques Kallis who hit Daniel Vettori straight down the ground and then timed a Tim Southee delivery so perfectly through the on-side that I’d love to have him set my watch. Smith finished off the mandatory Power Play overs with a sweet cut through the off-side for four and South Africa had reached 50/1 in 10.

The runs continued to flow in the bowling Power Play, but Smith slashed at a wide ball from Jacob Oram and found a fielder on the full to hamper South Africa’s cause.

Enter AB de Villiers who once again injected the South African innings with what is becoming his trademark intensity. His form, even after missing two games, was fully evident and he used his feet to complicate the spinners’ lives and his incredible timing to scythe fours through a packed off-side field off Oram and Southee.

South Africa were trundling toward a semi-final spot, until the wheels completely fell off. At 108 for two, Kallis pulled a short ball which seemed to be travelling for a clear six until Jacob Oram’s giant frame plucked the ball out the air. And then the Kiwis really turned the screws with Vettori bringing the field up and not allowing a single run that didn’t have to be fought for.

Duminy replaced Kallis and only lasted 12 balls before being bowled trying to cut one which was too full, and then Faf du Plessis called for a non-existent single which ran AB de Villiers out two balls later. De Villiers had looked so solid he could have won the game on his own with any kind of support at the other end.

Oram rearranged Johan Botha’s stumps and then Robin Peterson feathered one through to the wicketkeeper. There was a slight brightness in proceedings as Du Plessis threatened to scrape towards the finish line, but he was caught in the chase and Morné Morkel was the last wicket to fall going for the big hit.

South Africa, from a position of strength at 108/2, plummeted to 172 all out – eight wickets lost for 64 runs with nearly half of those 64 coming in the stand between Du Plessis and Morkel.

It was a swift end to South Africa’s dreams of finally winning a Cricket World Cup knockout game. The competitions in 1992, 1996, 1999, 2007 and now in 2011 have all ended in the first knockout round for the Proteas (although to be fair 1992 was a farce). After their performance in the nail-biter against India, I maintain that the choking demons have been exorcised, but as well as New Zealand bowled and fielded today (led by Oram and Guptill), South Africa’s play in the middle of the innings was absurd. Kallis’ wicket may have precipitated the collapse, but that shot was on and it was a superb catch that ended his innings. Duminy’s shot and De Villiers’ run out were soft dismissals and the lower order were called on again to make up for a below-par performance of the top order – the exact same set of circumstances which led to the loss against England.

Conversely, Imran Tahir is a huge positive that South Africa can take from the tournament. On most pitches in the world our top bowling attack must include Steyn, Morkel, Tsotsobe and the leg-spinner. Johan Botha would have been expected to fill his shoes, but his place will be in jeopardy. Faf du Plessis has made a good case to be a permanent inclusion into South Africa’s setup and will have Colin Ingram breathing down his neck for motivation.

Smith will take it in the neck as skippers usually do, but I think his captaincy has been exemplary this tournament and was a large part of the successes up until the collapse against New Zealand. I honestly feel that he is leaving as the best ODI captain he has ever been and I am genuinely sorry for him after tonight.

But until the next attempt in 2015, South Africa will suffer the indignity once again of being favourites who go home early. Again. Though it clearly wasn’t a choke, the swipes will rain down. So be it. DM