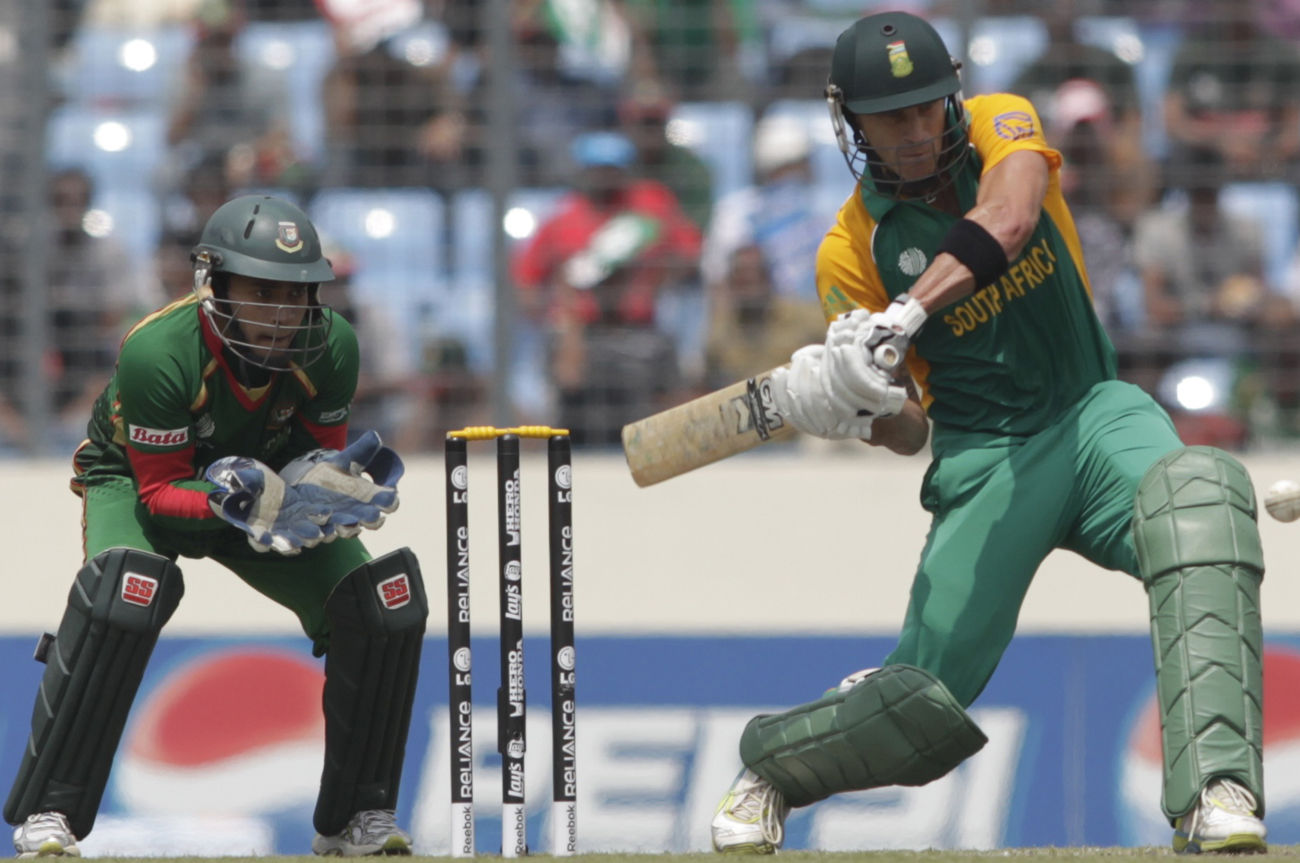 One almost felt guilty watching South Africa destroy Bangladesh in Dhaka. Almost … but to see “Lopsy” Tsotsobe do the famous Makhaya Ntini rightwing-swerve and “Biff’s” lightning reaction in catching a ball in less than a second, made that secret part in the heart of every SA fan do a little victory back-flip. By SIMON WILLIAMSON.

The rampant Proteas shattered any expectations of the co-hosts progressing in the World Cup – and risked inviting a hail of stones at the team bus on the way back to their hotel. While South Africa will surge forward into the semi-finals full of confidence with a 202-run victory margin, Bangladesh will reflect on a failed campaign at a time when (and in conditions where) they should be competing, if not winning.

South Africa’s 284/8, masterminded by Jacques Kallis and Faf du Plessis, proved too much for the Bangladesh batting order as its fragility was ruthlessly exposed for the second time in the tournament, this time  in Lonwabo Tsotsobe’s opening spell. While Tsotsobe accounted for the top order, Robin Peterson gutted the middle and when 5 wickets were down for 38 runs the rest of the match became nothing more than a courtesy outing as disappointed crowds began streaming out of the grounds.

Graeme Smith had earlier won the toss and elected to bat on a pitch which looked like it could cause a problem or two. Dale Steyn, Morné Morkel and Colin Ingram were rested and in came Imran Tahir, Wayne Parnell and Lonwabo Tsotsobe. Smith and Hashim Amla put on 98 for the first wicket before the South African skipper was stumped off Mohammad Mahmudullah. While the statistics of Smith’s innings may not look too impressive (45 off 68 balls), he did look in much better form. His timing has come back somewhat and he found it easier to push singles. His body language is also healthier – he came forward a lot and is usually at his best when he comes to meet the ball. While he may not have played a great knock, I would venture to say his form is now in better health than it has been this tournament.

Amla and JP Duminy followed Smith shortly after, putting South Africa in slight trouble at 141/3, but it was that man, Jacques Kallis, who played a sublime knock to set up what would be (far more than) a match-winning total. Kallis plays with such a straight bat you could denote a time-zone with it, and his incredible timing and shot-placement were unanswerable. Bangladesh, like many other teams have repeatedly discovered, tried everything, but Kallis strolled to his 82nd ODI 50, supported perfectly by Faf du Plessis who made his second international half-century. Kallis stroked the ball around, including a scrumptious drive through the covers and a sweet straight drive which mid-on couldn’t get a hand to. He is correctly referred to as a text-book cricketer. Anyone who wants to learn how a shot should be played need look no further than our best batsman since readmission.

Robin Peterson’s swift cameo (22 off nine balls) elevated South Africa’s score from decent to authoritative, but, as it turned out, the opening stand would have been enough. Bangladesh’s batting performance was disappointing. While South Africa may have come into the contest as favourites, no one would have expected the co-hosts to roll over quite so pathetically.

Tsotsobe gratefully took his opportunity back in the playing XI and in a hostile opening spell he removed the dangerous Tamim Iqbal, Imrul Kayes and Shariar Nafees. Kayes’ dismissal was the most curious as he inexplicably left an in-cutter which knocked his off stump over. Tamim Iqbal was caught behind going on the hook and Nafees chopped on with a loose drive. Johan Botha opened the innings with Tsotsobe and his tight and controlled off-breaks accounted for Junaid Siddique with probably the most plumb and most obvious lbw appeal that has ever been reviewed.

After the top order had been dismantled, Robin Peterson crashed through the middle order with an incredible spell of 4/12 in seven overs. His first was Rahim Mushfiqur (the only right-handed batsman in the top six) who attempted to defend, but was snapped by a blinder of a catch by Smith at slip – recorded at 0.7seconds. Shakib Al Hasan, the only Bangladeshi to get into double figures, was caught by Morné van Wyk and then two balls later Shafiul Islam agriculturally heaved at one only to hear his stumps being rattled. Peterson’s and the game’s final wicket came when a quicker ball permeated the defences of Naeem Islam.

Ironically, the Bangladesh crowd applauded when their team passed 58 – the score they had been bowled out for against the West Indies. I say ironically, because 20 runs later they had been bullied into a submissive 78 all out.

Bangladesh should rightly feel disappointed. They finally have some good players: Iqbal, Kayes and Siddique are a good top three. Shakib Al Hasan and Abdur Razzak churn out 20 overs of high-quality spin. And in home conditions they should be competing to a far larger extent.

South Africa will continue happily, with the Australia-vs-Pakistan clash deciding whether they will meet Pakistan or New Zealand in the next round. DM