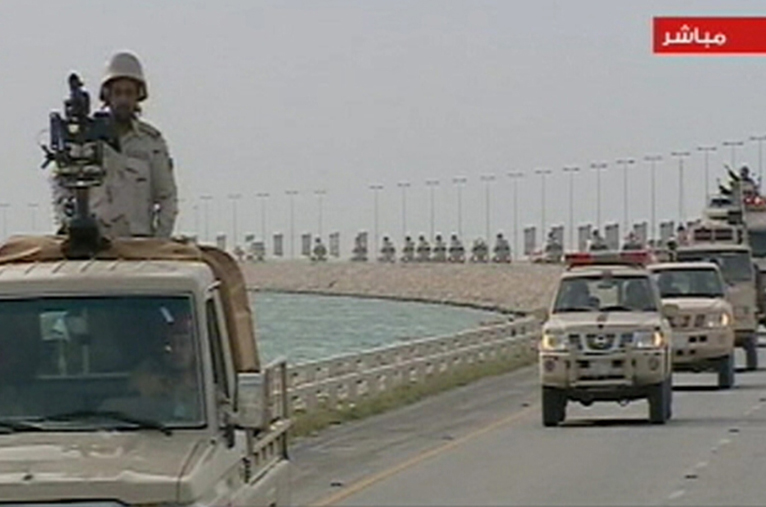 Since January, the geronto-kleptocratic regimes in the Middle East and Mahgreb have responded along a continuum of ways to their social challenges. Some, like the regimes in Tunisia and Egypt, simply collapsed in response to massed protest. In Yemen, the regime continues to fight back. In Algeria and Iran, the rulers have, so far, effectively snuffed out the opposition. In Jordan, the response has been to give a little, take a little, hoping for a better, calmer future. And, of course, in Libya, the man who would be King of Africa has fought back with everything he can to crush his opponents.

On Monday the ruling houses of Bahrain and Saudi Arabia came up with the newest wrinkle – bringing in perhaps 2,000 troops (reports on the actual number still vary) from Saudi Arabia under the flag of the Gulf Cooperation Council (an association of the Arab kingdoms, emirates and sultanates fronting on the Persian Gulf) to bolster the flagging security forces in the Gulf’s smallest state. According to witnesses, the Saudi military convoy rode into Bahrain via the causeway that links Saudi Arabia with the Minnie Me-sized nation.

Associated Press and other international media said the troops actually came from a special unit of the six-nation Gulf Cooperation Council and entered Bahrain to protect critical governmental installations and oil facilities. Others have reported the convoy seems to have been on its way to Riffa, the predominately Sunni area and home to the royal family and a military hospital.

Bahraini opponents to the country’s royal family – mostly majority Shi’ites against the rulers’ Sunni minority – promptly came out strongly opposed to this newest, ominous development, saying the arrival of soldiers and military vehicles was “an overt occupation of the kingdom of Bahrain and a conspiracy against the unarmed people of Bahrain”. Meanwhile, pro-government legislators in Bahrain’s toy telephone of a parliament called for martial law to stem the growing disaffection.

On Monday anti-government protesters continued to gather in Manama’s streets, following serious clashes with the country’s security forces on Sunday. Sunday’s demonstrations essentially shut the roads entering the country’s financial district and carried out big rallies on the grounds of the country’s university as well.

The Bahraini unrest has clearly unsettled the Saudi royal family and elite – Saudi Arabia broadly shares Bahrain’s social divisions with its own division between Shi’ites and Sunnis. Protestors told reporters that Sunday’s events were “a very, very big day. Now the protesters control these streets. There are walls of rubble keeping out the police and armed groups. People say they will not sleep tonight.”

In countercharges that should sound depressingly familiar to other statements heard from other regimes in other years, the Bahraini government said the violence started after “a group of protesters attacked unarmed police officers, resulting in one police officer being stabbed and another sustaining a serious head injury. Police then sought to disperse approximately 350 protesters using tear gas to clear the road. The ministry of interior is currently undergoing operations to reopen the King Faisal Highway.”

For their part, protestors seem to be increasingly frustrated that, while they have been allowed to gather at the symbolically important Pearl Square traffic circle, they are far, far short of any actual achievement of their larger political goals. As a result, they have told the press they made a decision to move on to the country’s financial centre, itself symbolic for a country that puts great store in its business-friendly policies – visible to anyone who has ever seen any of the commercials on international satellite television broadcasts.

One protestor, Mohammad Mattar, a member of the pro-reform Waad movement, told reporters, “We want a new constitution, fair and free elections and a government elected directly by the people. These are not sectarian demands, but political ones. We want a constitutional monarchy, a clear relationship between the ruling family and society. But the security forces are trying to create a sectarian divide.” The growing protests come as US defence secretary Robert Gates had stopped in Bahrain and offered a warning to the country’s ruling family – the Khalifas have been in charge there for two centuries – that they must really go beyond the “baby steps” of reform if they are to cope with the economic and political demands in their nation that parallel the calls for reform coming from people throughout the Arab universe.

Gates told reporters the US, so far, “had no evidence that suggested that Iran started any of these popular revolutions or demonstrations across the region. But there is clear evidence that as the process is protracted, particularly in Bahrain, that the Iranians are looking for ways to exploit it and create problems.” And more ominously, he wrapped up his comments, adding, (cue that ominous background soundtrack), “Time is not our friend”.

Then, in tandem with Gates’ comments, the Obama administration issued a more all-encompassing statement that urged “the government of Bahrain to pursue a peaceful and meaningful dialogue with the opposition rather than resorting to the use of force”.

This troop deployment seems to be a visible sign of an increasingly sharp divide between the US and Saudi Arabia on how to address the rolling foment in the Arab world. American officials are saying in increasingly loud sotto voce asides that they are growing concerned the Saudi kingdom’s own stability could end up being affected by the larger regional unrest, by its opaque succession politics and its obdurate resistance to reform.

The Saudis have, so far, managed to put a cap on public protests by spending money on new jobs programmes – together with an overwhelming police presence, backed by warnings last week from the foreign minister to “cut any finger that crosses into the kingdom”. And Monday’s military move was a clear indication the Saudis were prepared to put their troops on the line in a neighbouring state if necessary.

But this, in turn, has created yet another difficulty for the Obama administration in responding decisively to the region’s roiling political dynamic. For now they have criticised actions, but not the rulers of the Saudi kingdom itself. The problem, of course, is that Saudi Arabia is America’s most important Arab ally and, of course, one of the world’s prime sources of petroleum exports. In response to American actions earlier, Saudi government officials have made clear their disagreement with the way Obama responded to Egyptian developments, essentially accusing the Americans of tossing a long-time ally overboard.

As The New York Times reported on Tuesday: “When Secretary of Defense Robert M. Gates and Secretary of State Hillary Rodham Clinton were forced to cancel visits to the kingdom in recent days, American officials were left wondering whether the cause was King Abdullah’s frail health — or his pique at the United States.

“’They’re not in a mode for listening’,” said one senior administration official, referring to the American exchanges with Saudi officials over the past two months about the need to get ahead of the protests that have engulfed other Arab states, including two of Saudi Arabia’s neighbors, Bahrain and Yemen.”

And, not surprisingly for an absolute monarchy, the Saudis remain unconvinced of US government messages that support the “universal values” of freedom, including those pesky peaceful protests by citizens. While this disagreement has a long way to go yet, a possible fundamental change in their relationship can also change the face of Middle East forever. DM