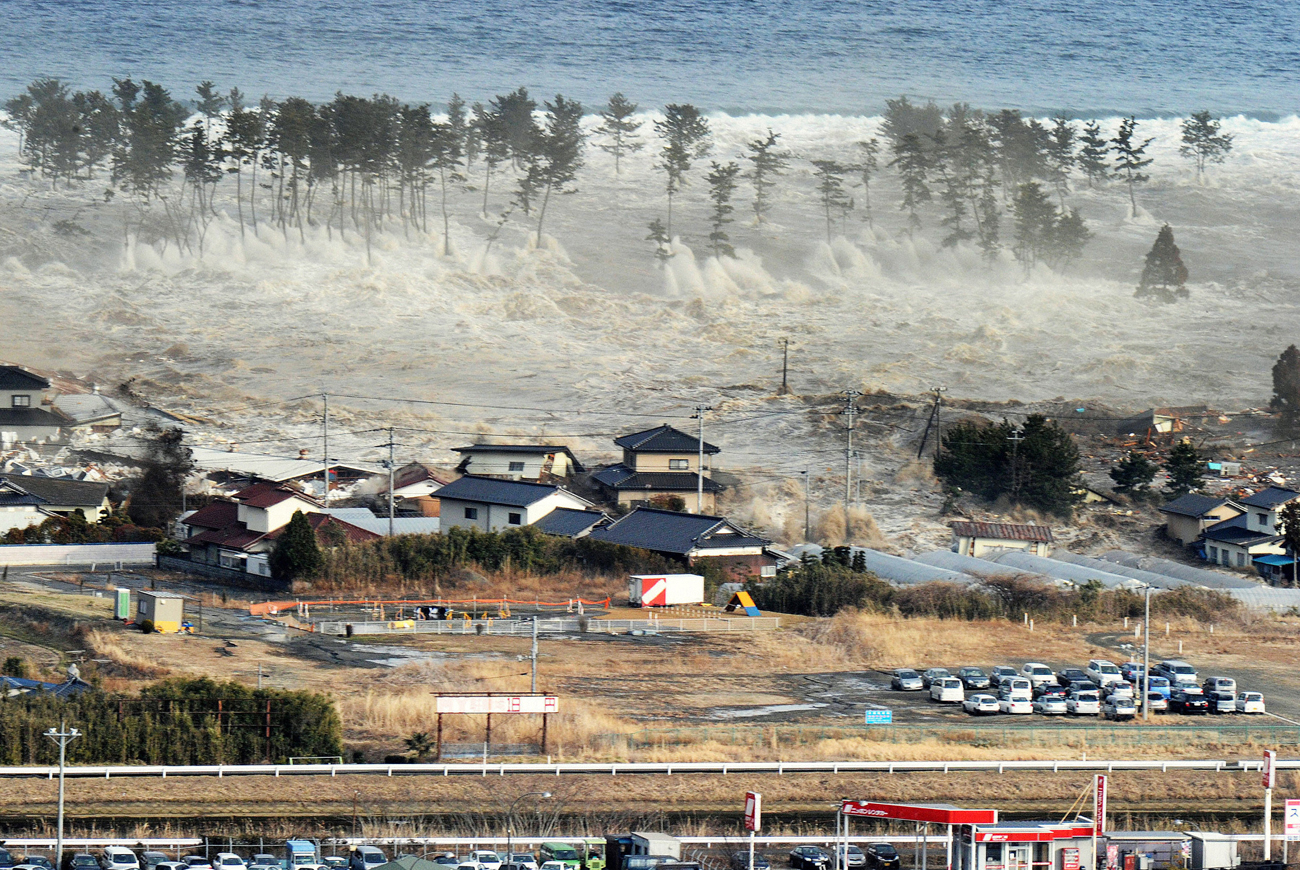 Seen through centuries of mystery and legend, Namazu, the giant catfish that lives beneath Japan, squirmed violently on Friday. Seen through the eyes of science and millions of dumb-struck television viewers worldwide, the monstrous earthquake and tsunamis that hit the world’s third-largest economy bring back personal memories for J BROOKS SPECTOR of what life is like where Earth’s restless tectonic plates rub against each other.

An undersea earthquake registering 8.9 on the Richter Scale 120km off the west coast of Japan rocked wide areas of country from the north-eastern city of Sendai as far south as the Tokyo metropolitan region and Yokohama. Aftershocks as high as 7.4 were felt around the nation as well. Soon after the quake struck, coastal regions were already being devastated by tsunamis generated by the quake.

Further afield, around the Pacific Rim and as far as Hawaii, officials declared tsunami warnings. In some areas such as the Kurile Islands north of Japan, and on Hawaii, limited evacuations of low-lying areas were already under way. Fortunately, according to Japanese Prime Minister Naoto Kan, while the disaster wreaked major damage, there had been no leakage of radiation from nuclear facilities.

On Friday, television viewers around the world were transfixed by images of massive waves moving across the land, pushing ships, cars, trucks, buses and homes ahead of them. In some cases, burning buildings were part of the moving destructive spectacle. Pictures from affected areas showed freighters that had been moved right over the breakwaters of some of Japan’s smaller harbours. The Japanese are accustomed to such demonstrations of the power of nature – the word, tsunami, is itself a Japanese word. Photo: Houses are swept by water following a tsunami and earthquake in Natori City in northeastern Japan March 11, 2011. REUTERS/KYODO

Japan is no stranger to earthquakes either, lying as it does on the so-called “Ring of Fire” that encompasses the Pacific Rim and results from the clashes of tectonic plates that actually cut across the eastern side of the Japanese islands. Geologists say that the Japanese islands are generally hit by about 2,000 quakes a year, although nearly all are much smaller than on Friday.  In fact, this latest quake is the strongest to hit the country in 140 years – significantly stronger than the devastating 1923 earthquake that levelled whole quadrants of Tokyo and Yokohama and killed more than 140,000 people. Out-of-control fires that burned for days afterwards destroyed even more of Tokyo and the neighbouring cities.

The ancient Japanese view was that earthquakes were the result of a giant catfish, Namazu, twitching and turning under the earth. The god, Kashima, usually guarded Namazu, but sometimes the catfish slipped out of his control and the result was great devastation. As a result Japan has been a leader in earthquake-resistant building technologies as well as (only modestly successful) efforts to predict quakes.

In fact, the Namazu legend may have a distant root in careful observations of nature: violent jumping and twisting movements have actually been observed in real catfish before earthquakes strike. There are also other legends about strange fogs, glowing cloud formations, sparkling lights in the sky and unusual animal and fish behaviour just before a quake. Chroniclers of Japanese folk history have noted reports of lights in the skies before an earthquake, especially reddish clouds and sparks in the sky, including a report back as far as an earthquake in 869 AD.

Traditional building methods meant houses and many other buildings were made of wood. They collapsed in a strong quake, but they could be rebuilt afterwards. And the way such buildings collapsed tended to minimize injury and death. More recently, with concrete and steel construction methods Japanese buildings have been built or retrofitted with a variety stress-dampening shock absorbers.

About 20 years ago, my family was looking for an apartment to rent in downtown Tokyo as we contemplated leaving the diplomatic service and joining a foreign corporation in Japan. After a few weeks of apartment hunting, we found a magnificent apartment on the 20th story of a newly renovated block of flats. A small flat compared to a home in South Africa, but it had astounding wrap-around windows that offered views of the entire city – and Mt. Fuji as well. The estate agent, while happy to glow warmly about the building’s new décor and slick fittings, really wanted to show off the newly installed anti-earthquake technology deep in the building’s basement – giant shock absorbers the size of a bus, underpinning and bolstering the building’s structural pilings. Photo: Japan’s Prime Minister Naoto Kan (C) reacts he he feels an earthquake as he attends a committee meeting in the upper house of parliament in Tokyo March 11, 2011. REUTERS/Toru Hanai

At earlier times when we lived in Japan, we received instructions from our municipal government about coping with earthquakes. These included what to buy for a family emergency kit, city-approved safety helmets for adults and children, where to stand in a house when an earthquake hit (under a door frame, for those who are interested) and where the nearest open space was located for families to reassemble after the quake. The country actually now has an annual Earthquake Preparedness Day, but nothing really prepares people emotionally for the moments when a quake first hits – even a small one.

Living in Yokohama, we used to hang our cooking pots on hooks on the wall in our little kitchen. We figured out that when the pots bumped the wall during a quake, things were still okay. If the pots hit each other, it was time to find the children, get out the helmets and get clear of the windows. But when the pots started clanging and falling off the wall, it was time to move – fast.

While Japan has prided itself on being prepared for earthquakes, the Hanshin quake in Osaka-Kobe at the end of 1994, that killed more than 5,000 people, came as a rude surprise to emergency response planners and ordinary citizens alike. Elevated highways collapsed, rescue services were slow and erratic in response, buildings supposedly ready to bear the stress of a major quake, didn’t. I was in Osaka less than a week after the quake struck. Late at night, parked in my room in a new, high-rise hotel that had so far withstood disaster, I very carefully studied the escape instructions in my room. According to a helpful flyer in five languages, I was supposed to punch out the window of my 30th story room, and ease my body into a heavy-duty canvas tube fitted to the side of the building next to my window and then slide my way to safety – hundreds of metres down to the ground. While the damage in Japan is clearly going to be enormous from both this new quake and the resulting tsunamis, and it will almost certainly affect nations beyond, so far the death toll remains low – probably a tribute to the increased preparedness that has come in the wake of the 2004 earthquake and tsunamis in Sumatra as well as Japan’s own experiences in recent years. And, of course, fortunately for millions, much of the tsunami’s effects so far have devastated mostly farmland and not major city neighbourhoods.

The Japanese have always taken cognisance of the transitory nature of life. Homes, temples and shrines were built and rebuilt after quakes, floods and fires. Celebrations (and a great time for a party) mark the fragile, temporary beauty of the cherry blossoms. Japanese poetry often commemorates the inevitability of aging and death.

And perhaps much of this attitude has been encouraged by the nearness and likelihood of nature’s threats. Earthquakes come from the grinding of those always-moving tectonic plates – or that giant thrashing catfish. Regardless, the restless planet underneath Japan also gives rise to something wonderful as well. The country hosts thousands of hot springs, many with soothing and even medicinal properties.

There are very few things in life better than soaking in a steaming outdoor rock pool, drinking fragrant, warm sake from a beautifully crafted porcelain cup, while surrounded by a Japanese garden with the borrowed landscape of a mountain range on the horizon, with a full moon that hangs high in the sky, all while large, soft snow flakes fall lightly and silently upon this scene, deep into the night.

Shame all that beauty has to be paid for by the earthquakes and gigantic surging walls of water. DM

Main photo: A massive tsunami sweeps in to engulf a residential area after a powerful earthquake in Natori, Miyagi Prefecture in northeastern Japan March 11, 2011. The biggest earthquake to hit Japan in 140 years struck the northeast coast on Friday, triggering a 10-metre tsunami that swept away everything in its path, including houses, cars and farm buildings on fire. A tsunami warning has been issued for the entire Pacific basin except for the mainland United States and Canada following a huge earthquake that hit Japan on Friday, the Pacific Tsunami Warning Center said. REUTERS/KYODO.