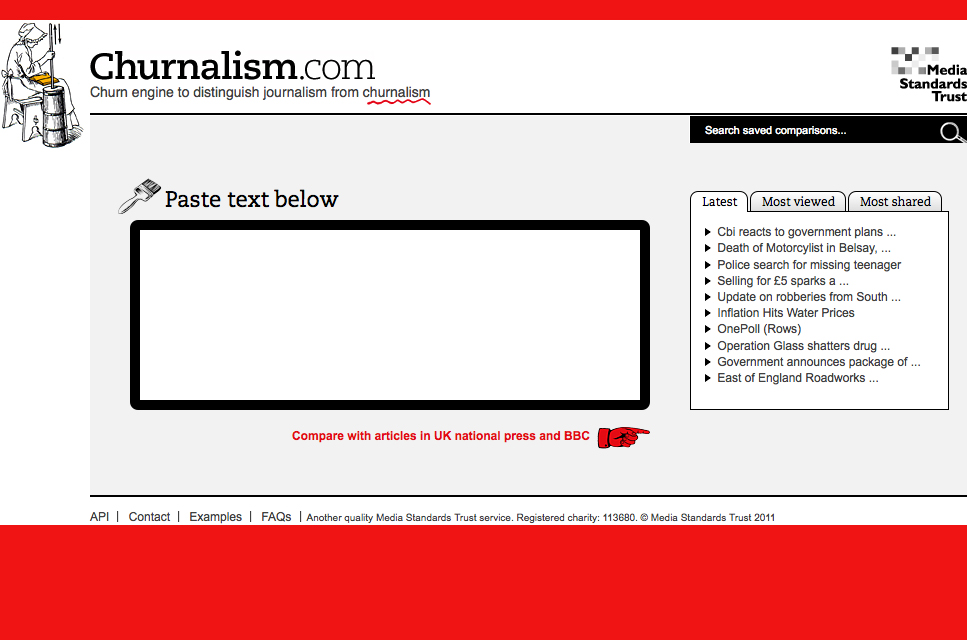 The press release, along with the idea that newspapers are a great vehicle for unconscious manipulation of the masses, was developed and perfected by Sigmund Freud’s nephew in the 1920s. This month, finally, the Internet makes available a free machine for distinguishing churnalism from journalism. By KEVIN BLOOM.

The Museum of Public Relations, founded in 1997 and situated on Broadway in Manhattan, takes itself pretty seriously. There’s nothing ironic in its self-plug that it’s *the* place to go for people who want to learn about “how ideas are developed for industry, education, and government”. The humourless focal point of the museum is Sigmund Freud’s nephew, Edward L. Bernays. As the profession’s founding father, Bernays has a biography with a lot more adjectives than the other early pioneers. And no campaign is written about in tones of greater reverence than Bernays’s work for the world’s largest manufacturer of household staples, Procter and Gamble.

In 1923, goes the legend, four years after opening his own public relations firm, Bernays was contracted by P&G to provide back-up to its advertising on Ivory soap. A huge fan of surveys (he is credited as the man who brought the survey to PR), the 32-year-old kicked off with a set of numbers that demonstrated a nationwide preference for white, unperfumed soap. Ivory, as it happened, was the only such soap on the market, a fact the press published next to the survey results, and Bernays’s objective was met.

But soap is one thing, making smoking fashionable amongst women something else entirely – and this was what really won Bernays his fame. In 1928, when he was hired by the makers of Lucky Strike to boost cigarette sales, women seemed the obvious growth market. Bernays consulted a psychoanalyst, who figured out that cigarettes symbolised “freedom” for women. So during the 1929 Easter Parade, he arranged for a cast of models and actresses to parade down Fifth Avenue in New York, sucking on their “Torches of Freedom”. The event made the front page in all the national papers and all but smashed the taboo on female smoking.

1928 was also the year that Bernays published “Propaganda,” a book that soon became – and remains – the de facto manual for the PR industry. The first chapter opens with the following words: “The conscious and intelligent manipulation of the organised habits and opinions of the masses is an important element in democratic society. Those who manipulate this unseen mechanism of society constitute an invisible government which is the true ruling power of our country.”

The vehicle for Bernays’s manipulation of the masses, of course, was the press. He couldn’t have made Ivory the most popular soap in America or pried open the female market for tobacco companies had he not had the national newspapers right where he wanted them. His genius was that there was no bribery or corruption involved, all he did was give the press what they craved – stories that would entice readers and fill the pages, sometimes with visuals to match, and often with the sorts of stats and surveys that lent the pieces their all-important air of authority.

Now, eight decades or so later, we have churnalism.com. A non-commercial site funded by the Media Standards Trust, it allows users to paste in press releases and compare them with all the news in the UK’s national papers, as well as with stories on the BBC site and Sky News online. The word “churnalism” comes from Nick Davies’s book “Flat Earth News,” and means exactly what it appears to mean – an item in a newspaper published as journalism that is, in fact, a barely reworked press release.

According to an in-depth feature on churnalism.com in the latest edition of the Columbia Journalism Review, more than half the stories in the UK national press can be “at least partially sourced” to PR. The feature also notes: “In the US and UK there are now more PR people than journalists. The PR industries in these two countries are numbers one and two in the world in terms of size. In the UK, PR accounts for over £6.5 billion in revenues. PR is, in the words of Trevor Morris and Simon Goldsworthy, ‘faster growing, better paid and better resourced’ than journalism. ‘Like it or loathe it, PR has become a key ingredient in many of our lives.’”

Why’s this a bad thing? If you have to ask, maybe The Daily Maverick isn’t a place for you – but just in case you’re curious, here’s how Davies sums up the problem: “[This] material, whether or not it is truthful, is designed specifically to promote or suppress stories in order to serve the interests of political, commercial and other groups.” In other words, these stories are sales pitches masquerading as objective journalism, and there’s a double-deceit at play; it serves neither the PR companies nor the newspaper editors to let you, the reader, know that what you’re really confronting is a conscious effort to manipulate you.

Still, the CJR does concede that not all churnalism is unhealthy, and of course they’re right – where would we be without government announcements, news of (worthwhile) corporate social responsibility initiatives, and releases on medical breakthroughs? The issue, rather, lies in the lack of transparency. While the space constraints in print are an (almost) understandable excuse for the institutional and historical failure of newspaper editors to acknowledge the source of their PR-based stories, in the online environment that excuse falls away. Hence churnalism.com – a site where you can check for yourself.

At the time of writing, the second most shared item on churnalism.com is a press release entitled “Waitrose to open first ever Glasgow store”. The release was issued by the UK retailer itself, and underneath the item as it appears on the site is a line that notes “three articles may be churnalism”. These three articles include one from The Herald (which, the site helpfully tells us, has 1046 characters overlapping with the original release), one from BBC News (1027 characters overlapping), and one from The Daily Express (a more modest 475). Are the BBC embarrassed that they’ve apparently copied more sentences word-for-word direct from a press release than one of the country’s most notorious tabloids? Doesn’t say, but somebody might have some explaining to do… DM